Thunder Kid was the first monster Tristan Taylor acquired in the World of Capsule Monsters.

Thunder Kid and Happy Lover were inadvertently released by Tristan Taylor and Téa Gardner, who stumbled over their capsules while fleeing from a group of Gokibore. They followed Tristan and Téa into a tunnel, sliding into a beach.[1] Téa initially got a shock when she spotted them, but as Happy Lover and Thunder Kid struggled to pull their heads out of the sand, Tristan was unsure if they should run or help them. Téa then recognized Happy Lover as a piece from the Capsule Monsters game and asked if Tristan agreed that he was cute. Tristan agreed but said that same could not be said for the "stubby mutant lizard". Thunder Kid was taken aback, but Téa got Tristan to admit that he was just kidding, which cheered him up.[2] 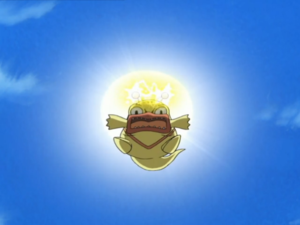 Happy Lover and Thunder Kid warned Téa and Tristan as they saw Root Water emerging from the water and stepped forward to protect them. Thunder Kid tried to attack Root Water with its electricity, but was blocked by a wall of water. Root Water fired a number of blasts of water at Thunder Kid, leading Tristan to realize humans felt the same pain as their monsters. Téa encouraged Happy Lover to use its ability to heal Thunder Kid, which consequently healed Tristan. Since Root Water was able to block Thunder Kid's previous attack, Tristan came up with another strategy. This time when Root Water attacked Tristan pushed Thunder Kid into the air, putting the sun to his back, allowing him to blindside Root Water. The attack was successful, but Root Water evolved into High Tide Gyojin afterwards, leaving Thunder Kid and Happy Lover cowering in fear. High Tide Gyojin sucked the group into a twister, until they were rescued by Solomon Muto and Summoned Skull.[1] 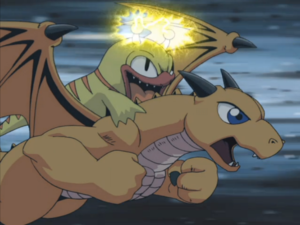 Thunder Kid took part in the battle Tristan and his friends had with the Flower Wolf pack. He fought off a number of the wolves and saved Baby Dragon, when one of the wolves bit onto it. This left Thunder Kid open and he was scratched by a wolf. Eventually, Thunder Kid was overpowered and pinned to the ground. Yami Yugi got Celtic Guardian to throw his sword into the air in a spinning motion, allowing it to be used to reflect an electric attack from Thunder Kid, temporarily blinding the wolves, giving the group a chance to escape.[3]

When the humans were attacked by a group of The Wandering Doomed and Wood Remains, Thunder Kid was summoned and fought a number of them off.[4]

Thunder Kid battled Aqua Spirit at the Fortress of Fear. He was overpowered, but saved by Dark Magician.[4]

Thunder Kid helped fight against the Medusa Worms and destroyed at least one of them. However with reduced visibility, due to the sandstorm, he and Flame Swordsman attacked each other, each mistaking the other for the enemy.[5]

Tristan summoned Thunder Kid to try and break the "unbreakable stone" in the second of the Trials of the Capsule Monsters. Thunder Kid was unsuccessful, but aided in battling Prisman afterwards. He and Tristan taunted Prisman into attacking them with his blasts of light. However they kept dodging the attacks, causing the stone to crack. Once Prisman was distracted by Joey Wheeler, Thunder Kid attacked the now-damaged stone, causing it to break.[6]

Thunder Kid was called to battle Joey, who had been possessed by the Blade of Chaos, but ultimately did not fight as Yami assumed that responsibility.[7]

Tristan summoned Thunder Kid to battle Petit Moth. Before it got a chance to attack, walls suddenly emerged from the ground forming a maze. While navigating through the maze, Tristan began drawing his own face on the wall, so he could tell he had visited that portion of the maze before. Thunder Kid began to copy him by also drawing himself on the walls. After passing the same wall multiple times, Thunder Kid drew Tristan's attention to a capsule, which contained Shovel Crusher.[8]