Dark Magician was the fourth monster that Yami Yugi acquired in the World of Capsule Monsters. He evolved into the Magician of Black Chaos after Yami consumed a golden apple, while wearing Dark Magician as his Duel Armor. 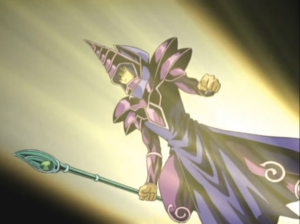 In the Fortress of Fear, Yugi Muto and Yami Yugi became trapped in a room with the walls closing in. Kuriboh called to them from its miniature capsule and upon being released drew their attention to another capsule nearby. As Yami clung onto the platform the capsule was on, he requested help from Kuriboh, who gave him a push, allowing him to touch the capsule and release Dark Magician.[1]

Dark Magician carried Yami to safety, flying above the temple. When Yugi noticed that his friends were in danger, Yami forwent his current mission to open a tomb before sunset and got Dark Magician to save his friends. Using its "Magical Crossroads" attack, Dark Magician shielded Flame Swordsman, Thunder Kid, Dark Witch and Summoned Skull and attacked Garuda the Wind Spirit, Aqua Spirit, Spirit of Flames and The Rock Spirit. It succeeded in destroying three of them, while Summoned Skull was left to destroy The Rock Spirit in a double knockout. Dark Magician then dropped Yugi off at the entrance to fortress, allowing Yugi to open the tomb before sunset and acquire the Duel Armor.[1] 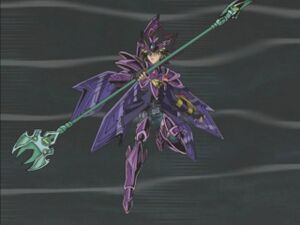 Yami summoned Dark Magician to battle against the Medusa Worms in the first of the Trials of the Capsule Monsters. He destroyed a number of the worms and pulled Yami to safety when he was attacked by one. He then flew Yami above the sandstorm and notified him of the tornado, the source of the sandstorm. He returned Yami to ground level and destroyed another Medusa Worm. Seeing Dark Magician as too valuable, Yami returned him to his capsule, so he would not risk losing him.[2]

Battling, while fused with a monster takes a toll on one's energy levels, so Yugi needed to rest after the battle with Mystical Sand. As he slept, he had a dream where Yami was being chased by Seven-Armed Fiend. Dark Magician appeared before Yami and merged with his Duel Armor. However the Dark Magician armor shattered almost immediately.[3]

During the second trial, Yami again fused with Dark Magician to protect his friends from Skull Guardian. He succeeded in subduing Skull Guardian, which caused a treasure chest to appear. Proving they were peaceful was a requirement of the trial, so Yami-fused-with-Dark Magician blocked Flame Swordsman from delivering a finishing blow to Skull Guardian.[3]

During the third trial, Yami fused with Dark Magican to fly to the top of the volcano, per the clue which said to "locate the peak that spits fire". There they were confronted by Joey Wheeler, who had become possessed and fused with Red-Eyes B. Dragon. Yami was uncomfortable with fighting his friend. However Joey was able to muster enough self-control to hold himself back and insist on Yami attacking to destroy the Red-Eyes B. Dragon armor. Yami used Dark Magician's "Dark Magic" attack, which succeeded in separating Joey and Red-Eyes. Still alive, Red-Eyes continued to attack, but Yami reflected its attack, using Dark Magician's "Magic Cylinder" attack.[4] 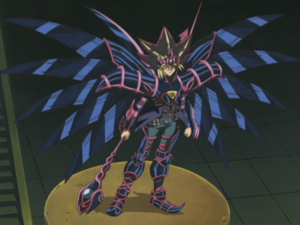