Zorc Necrophades (Zorc the Dark One in the dub) was the primary antagonist of the Pharaoh's Memories arc of Yu-Gi-Oh!, and as the source of the shadow power that was sought by Yami Bakura, one of the central forces throughout the series. He was described as a "Great Evil God" who was created out of the darkness of people's hearts, and his dark power was what was later used to create the Millennium Items and their powers. (In the dub, Zorc was stated to be the creator of the Shadow Realm.) He was the true form and entity behind Yami Bakura. 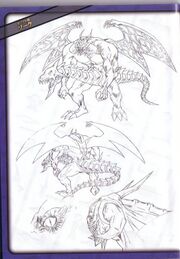 Zorc appeared as a gigantic, purple-skinned demon with huge, curved horns, bat-like wings, and a large dragon/snake appendage between his legs. The dub changed that appendage to protrude from his chest instead of between his legs, due to its phallic likeness; in the bunkoban of the manga, it was made to spiral around him. Zorc was very similar in appearance to Diabound (albeit far larger and more demonic), which was possibly due to his connection to King Bakura.

Necrophades is likely a portmanteau "necro" (Greek for Death) and "Hades" (the Greek Underworld).

Zorc, who was born from the darkness of people's hearts, had power that exceeded that of the Millennium Items, which were created by using his powers. (In the dub, he was the creator of the Shadow Realm.) Despite his similar origins (though on a far greater scale), it was suggested that Zorc was not related to the Duel Spirits, and was capable of utilizing unnatural attacks and effects. Because his powers stemmed from darkness itself, Zorc claimed that there was virtually no limit to his powers.

Zorc appeared to be capable of reversing and stopping time, a power that Yami Bakura used during the Shadow RPG through his Hourglass Tokens. That power could also create unnatural storms and disasters that were shown to affect both the World of Memories and Earth.

Zorc's sheer power allowed him to single-handedly defeat Exodia the Forbidden One, the three Egyptian Gods, and the Blue Eyes White Dragon. He also fared equally against the Blue Eyes Ultimate Dragon, and withstood a devastating attack from the Dragon Master Knight, the attack which destroyed the Dragon Master Knight himself. It took the powers of the Creator of Light in order to destroy Zorc.

3,000 years ago (5,000 in the dub), Zorc was only stopped when Atem used a spell to seal him away, at the cost of having his and Zorc's souls sealed into the Millennium Pendant before it shattered and became the Millennium Puzzle.

Aside from his immense durability and power, Zorc was capable of forming unnatural attacks and effects. He could attack with flaming projectiles that could cut and burn arbitrarily powerful monsters, in addition to a beam of darkness that sliced Exodia in half (In the manga, those attacks were referred to as "Zorc Inferno" and "Dark Phenomenon," respectively). He was capable of defeating enemies by petrifying them first. Zorc was also capable of creating a solar eclipse which rendered the Egyptian Gods powerless, which allowed him to petrify all three at once. Zorc was capable of conjuring attacks from any part of his body.

Zorc Necrophades was born eons before the Millennium Items were originally created, by his own claim, from the darkness in the hearts of people. (In the dub, he was the creator of the Shadow Realm, and therefore, predated the Millennium Items, though they were made by using his power.) He was an entity of pure evil, and desired nothing other than the total and absolute annihilation of all life. He was summoned by Aknadin, who brought all seven Millennium Items together in an underground crypt in Kul Elna 3000 years previous (5000 years in the dub). Zorc then infused a shard of his soul within Aknadin and created the Great Shadow Magus. Bandit King Bakura then managed to obtain all seven Millennium Items, and sacrificed himself in order to grant Zorc a physical form on Earth.

Zorc attempted to destroy the world, but was stopped by Pharaoh Atem. Atem sacrificed his life by sealing himself and Zorc (or at least, the memories of Zorc) within the Millennium Puzzle. Zorc managed to live on by sealing a fragment of his soul within the Millennium Ring. Also, during an unspecified point in time, King Bakura had also sealed his soul in the Millennium Ring, and both souls merged together and formed Yami Bakura. The fragment of Zorc's soul and the spirit of King Bakura later resurfaced when they possessed Bakura Ryou as the villain, Yami Bakura, who wished to obtain all seven Millennium Items in order to resurrect Zorc. Eventually, when Atem wished to regain his memories, Yami Bakura turned the event into a Shadow Game, known as the Dark RPG, which was played in the world of the Pharaoh's memories, and attempted to release Zorc's full self from the Millennium Puzzle, which gave him a second chance to destroy the world.

Zorc was once again resurrected, by King Bakura and Aknadin following the events of the past. Unbeknownst to Zorc, his awakening had triggered that of Hasan, who protected the Pharaoh.

In that second face-off, though his legion of spirits was matched, Zorc easily decimated the forces of Egypt, who resisted the attempts to stop him. Isis regathered the scattered Millennium Items, then attacked Zorc with a powered-up Winged Dragon, Guardian of the Fortress. Zorc dispatched the monster with ease, which killed Isis. Shimon next stood in Zorc's way and called forth Exodia to battle Zorc. In sheer power, even Zorc was matched by the Forbidden One, and the fight initially seemed even, with both combatants losing and regrowing arms. But Zorc's power was drawn from darkness itself, while Exodia drew its strength from a single person. Zorc ultimately dispatched Exodia, which killed Shimon as well. He also slew both Shada and Hasan as they protected the Pharaoh.

Yami Bakura and Yami Yugi reentered the RPG at that point (Yami Bakura revealed to Yami Yugi that he was Zorc). After he reclaimed the Millennium Puzzle, the Pharaoh summoned the three Egyptian Gods to battle Zorc. The Egyptian Gods clashed with the Great Evil God, and initially appeared to have defeated him. Despite the assault, including the Egyptian God Phoenix attack of The Winged Dragon of Ra, Zorc survived and created a solar eclipse, which robbed the Egyptian Gods of strength, and petrified all three. Priest Seto then opposed Zorc with the White Dragon, and again, appeared to match Zorc, but Zorc petrified the Dragon as well, then destroyed it, which took Seto out of the fight. As Zorc began to destroy the city, Seto Kaiba, Seto's modern reincarnation, stepped in, and refused to tolerate his atrocities any longer. Kaiba called out three "Blue-Eyes White Dragons", from himself, Seto, and Kisara, and fused them into the "Blue-Eyes Ultimate Dragon." The Ultimate Dragon clashed with Zorc, and, for the first time, the battle was even. The ultimate clash between light and darkness began to break down the barrier between worlds. The Pharaoh then appeared to merge with Kaiba and the Ultimate Dragon by using the Millennium Scale, became "Master of Dragon Soldier," and delivered an attack so powerful that it destroyed the Dragon Soldier itself. It still wasn't enough to defeat Zorc, and he prepared to destroy the Pharaoh. Shadi intervened using the body of Hasan and saved the Pharaoh.

At that point, Yugi Muto, Joey Wheeler, Téa Gardner, and Tristan Taylor arrived and discovered the Pharaoh's true name. They Summoned monsters to attack Zorc, including Mahad's spirit alongside Mana's Ka, but Zorc resisted even the most powerful of Mahad's magic and dispatched them with ease.

Téa then got the idea to cause the Pharaoh's name to appear on a cartouche that she had given him. As they did, Zorc tried to destroy them, but Kaiba had recovered and used "Ring of Defense" to protect them. Zorc broke through, but it was too late, and the Pharaoh re-learned his name - Atem. Atem then revived all three Egyptian Gods, and fused them together into The Creator of Light. Zorc was horrified that Atem had summoned the "Ultimate God", and was consumed by the Creator of Light's attack, which destroyed him along with Yami Bakura who lost the Ultimate Shadow Game and died for good.