Bandit King Bakura, known as Bakura, King of Thieves in the Japanese version, and usually referred to as Bakura, is a character and one of the main antagonists of the Pharaoh's Memories arc of the anime and manga. He is the original identity of the being known as Yami Bakura.[1] 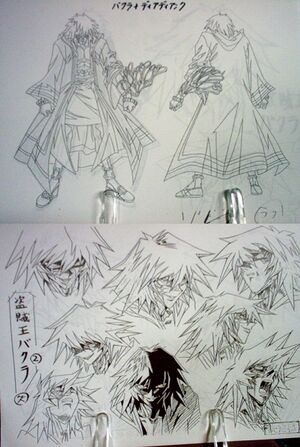 Bandit King Bakura has a similar design to Bakura Ryou, being his Ancient Egyptian counterpart. Thief King Bakura has shorter, gray hair, in contrast to Ryou's long white hair, dark skin, purple-grey eyes, and a 4-stitched scar under his right eye. He also wears an opened red flowing robe, exposing his muscular chest, a kilt, and slippers. He is sometimes seen wearing the Millennium Ring or holding the Millennium Pendant.

Bakura was a villager in Kul Elna, and was its only survivor when Akhenaden and three other magicians massacred the village, sacrificing 99 humans to create the Millennium Items. At the time, he was only a child and watched in horror as his family and friends were killed and their bodily components used to create the seven Millennium Items. However, Bakura soon acquired a powerful Ka, "Diabound", created from both his own hate and the vengeful spirits of Kul Elna. He soon developed a violent hatred felt grudge for Pharaoh Aknamkanon for ordering the massacre, and the royal family as well. Bakura soon waged war on Pharaoh Atem's forces. 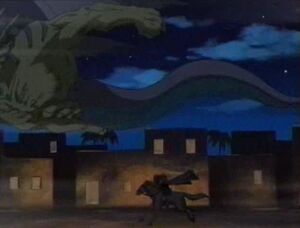 The full details of this conflict aren't known, but Bakura's Diabound engaged Atem's "Obelisk the Tormentor", and later Bakura's Diabound battled Atem's "Slifer the Sky Dragon". During this conflict, Bakura somehow sealed his own soul within the Millennium Ring[2], alongside a portion of Zorc Necrophades' soul, eventually merging to make a composite entity.

During Pharaoh Atem's celebration, Bakura is taken to be punished for grave robbing, however, his modern form takes over his body. After he collected various treasures from the late Pharaoh Aknamkanon's royal tomb, he and his minions assaulted Pharaoh Atem's Palace.

Arriving in the central hall, he deposits his stolen treasures and demands that the seven Millennium Items be returned to him. The Pharaoh's six guardians adamantly refuse and challenges his "Diabound". Seto's "Garestgolath" is destroyed when Bakura calls forth "Winged Sage Falcos", a Ka of the late Pharaoh. Bakura reveals that he took the DiaDhank from Ahknamkamon's tomb as well as the capacity to use the former Pharaoh's favorite creatures. The rest of the guardians are inflamed and summon various creature to battle Diabound. Mahad's "Illusion Magician" easily destroys the Winged Sage Falcos, but Bakura's assault crushes Aknadin's, Karim's and Shada's various creatures. Seto then has Karim fuse Seto's "Battle Ox" and "Mystic Horseman" to form "Rabid Horseman" which Bakura's Diabound disables with its serpent's tail but Mahad's Illusion Magician then seals Diabound. However, Diabound breaks free with its attack and crushes Seto's and Mahad's creatures. In an attempt to finish off the guardians, Bakura instructs Diabound to finish them but the attack is stopped by Isis's "Spiria" which is destroyed. Atem then steps forward and summons "Obelisk the Tormentor". Obelisk attacks but Bakura tells Diabound to attack using the power of the "Blue-Eyes White Dragon" from Yami Bakura's Duel with Seto Kaiba. Obelisk is stopped by the assault although Diabound is banished from the battle. 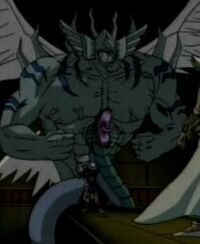 Bakura retreats and later attempts to raid another tomb, only to find Mahad waiting in ambush. The battle between Bakura and Mahad is fierce, as Mahad is able to access the Millennium Ring's power that had sealed there, becoming much more powerful in the process. Therefore, Illusion Magician is able to fight against Diabound with some success, especially after "Shadow Ghoul" joins the fray on Mahad's side with attacks from the shadows. However, Bakura's Diabound is able to evade and destroy Shadow Ghoul, severely weakening Mahad. Bakura's Diabound then deals a serious blow to Illusion Magician, sending Mahad nearly to his own death. Bakura is then struck with one of the traps in the tomb but frees himself with one of the hanging blades. He then instructs Diabound to attack from the shadows, due to gaining the ability of the destroyed Shadow Ghoul. Illusion Magician is nearly destroyed, and in desperation, Mahad's remaining power fuses with the Illusion Magician to form the "Dark Magician". Mahad blasts Bakura and Diabound out of the tomb with a massive assault, and Bakura is believed to have died in the rockslide that followed.

However, Bakura survived the assault and raids the city once more. Furthermore, he has acquired the Millennium Ring and uses its power to evade the guards and enter Aknadin's monster shrine. There, he speaks to Aknadin about the assault on Kul Elna and awakens the darkness that was placed when Aknadin created the Millennium Items. Bakura then instructs Diabound to cause utter devastation and flees, with Atem in pursuit and summons "Slifer the Sky Dragon". Slifer engages Bakura's Diabound. Due to the fact Diabound defeated Mahad's Shadow Ghoul, Diabound is able to disappear into darkness, and Bakura utilizes this to hide Diabound from Slifer's power. Although Diabound is hit by Slifer after it reveals itself to attack, it disappears again and begins to lay waste to the city. Atem instructs Slifer to protect the citizens, although Atem and Slifer are badly injured when Diabound assaults again. Atem attempts to end the battle by having Slifer attacking Bakura directly but Diabound is revealed to be right behind Atem. Atem is saved by the swift arrival of Seto's "Duos", and the guardians help fight Diabound out of the city. As Bakura's Diabound reveals itself, Atem tells Slifer to quickly attack, something that likely could have destroyed or severely crippled Diabound. But when Aknadin (fully engulfed in the dark side) cripples Slifer, Diabound then was able to destroy Slifer and Atem appeared to have been rendered powerless.

Much to Bakura' surprise, however, the arrival of the Pharaoh's modern-day friends rejuvenates Atem and calls upon "The Winged Dragon of Ra", mightiest of the three Egyptian Gods. Ra's inherent nature of being the sun god results in the battlefield being engulfed in light, revealing Diabound. Bakura, still confident, reveals that Diabound now has the power of an Egyptian God due to Slifer's destruction. It then assaults Ra, but is repelled by Seto's Duos. Ra then transforms into Egyptian God Phoenix mode and incinerates Bakura's Diabound, killing him. However, Yami Bakura on the Dark RPG table activates a Master Item to reverse time to the moment where Diabound was about to attack Slifer. Slifer is destroyed again, Atem is crippled, and Bakura is alive once more. Atem then falls into an abyss, barely holding on, and Bakura takes Atem's Millennium Pendant before sending Atem to his apparent doom. Bakura also has Tristan Taylor possessed by his modern form's splintered fragment.

Bakura returns to Kul Elna and inserts the Millennium Ring and the Millennium Pendant into the Millennium Stone (in the dub, he converses with Zorc Necrophades to find the eighth key (the Pharaoh's true name). Bakura then awaits the arrival of Atem and the guardians in Kul Elna and calls upon Diabound to fight Atem. Mahado (as the "Dark Magician") arrives to aid Atem and Mana comes with the "Dark Magician Girl" to help as well. Although the spellcasters' attacks are powerful, Diabound is protected by a shield created by the spirits of the Kul Elna incident. Seto, Karim and Isis arrive, and Seto and Karim combine Duos and "Curse of Dragon" to create "Duos Dragon" with Dark Magician at the helm that is able to combat Diabound until Bakura uses a small monster to attack Karim himself, bringing Karim close to death and destroying Curse of Dragon and separating the fusion. As Bakura tells the spirits to slay Atem, Ahknamkamon's spirit appears and repels the spirits. This also empowers the Dark Magician literally ripping apart Diabound. With Diabound defeated, Bakura is on the verge of death and desperately attempts to put the Millennium Items back into the Millennium Tablet. But due to the fact that some of the Millennium Items are still with their respective guardians, this was fruitless for Bakura until Aknadin arrives and paralyzes Atem's entire group. At this point, his modern form abandons his ancient counterpart's body; the real Bakura has outlived his usefulness and is reduced to sand.

After Aknadin transforms into the High Priest of Darkness, the power of Zorc revives Thief King Bakura. Bakura summons Diabound, revealing that the power of Zorc is so great that even Diabound can still be summoned despite its tablet destroyed. Bakura then proceeds to toy with Atem's group, putting them in different parts of Kul Elna. He then appears in the middle of the village and sacrifices himself to grant Zorc Necrophades a physical body on Earth.