Kisara (キサラ Kisara) is a character in the Yu-Gi-Oh! manga. This is the original depiction of Kisara. She wields The White Dragon, which is her ka and her ba, which can only be let out when she is unconscious, due to the fact that the White Dragon is actually possessing her. 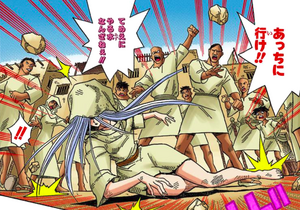 Kisara's pale skin and blue eyes led people to believe she was a witch and bad omen. While requesting water, she was stoned by civilians, who called her an ill omen and demanded she leave the city. She promised she would leave if she was given water, only to have a man unceremoniously empty a bucket of water on her. The High Priest, Seto, who was conducting the ka hunt saw what was happening. He condemned the civilians and had his men tend to Kisara. As they picked her up, Shada's Millennium Key began to react as he saw The White Dragon ka inside her heart, possessing immeasurable power.[2] Seto figured he could extract the ka from Kisara, it would be strong enough to protect the kingdom. While Kisara remained unconscious from her attack, Kisara ordered his soldiers to take her back to the palace, but keep her separate from the other prisoners of the ka hunt. He demanded that none of them speak of this to the pharaoh, as they did not have the luxury to be merciful at this time.[3] 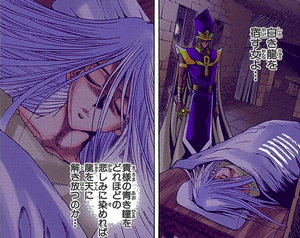 Kisara was taken to the Isolation Tower, where doctors treated her and said she would recover with rest.[4] Seto met Akhenaden at the Shrine of Wedju and told him about Kisara and her ka, whose power rivaled the gods. He planned to find a way to draw the greatest amount of power from her ka, by torturing the other prisoners in whatever way necessary.[5] Seto went to the Isolation Tower to check in on Kisara. He watched over her body and wondered how much pain she would have to endure before her dragon is unleashed. He vowed to make the dragon his servant, even if it meant sacrificing her.[4]

Kisara slept for four days, during which a special doctor looked after her. She was given food when she woke up. One of the guards told her that she owed her life to Seto, before having her escorted to the underground prison.[6] 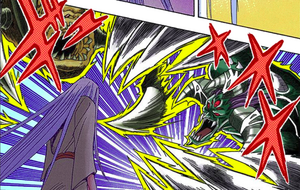 In the prison, Kisara met Seto, Akhenaden and Gebelk. She thanked Seto and told him her name. However she was put off by the sight of two prisoners being forced to use their ka in a fight to the death. She had never seen ka before and claimed that there was no such thing inside her, when Gebelk mentioned that she had one too. Gebelk proposed that they determine the extend of the power of Kisara's ka, by having her fight the prisoners and involuntarily summon her ka. Seto was cautious about doing this, fearing she might not be able to control her ka and could die, but was ultimately pressured by Akhenaden into agreeing.[7] 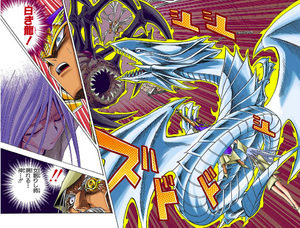 The White Dragon emerges while Kisara is unconscious.

Kisara was forced into the arena. The two prisoners currently battling, decided to take a break and focus on Kisara. Their ka Five-Eyed Horned Ogre and Gudoul approached Kisara. Gebelk assumed she would become flooded with the fear and unconsciously call out her ka. However Kisara stood still, ready to accept death. Realizing she was not going to put up a resistance, Seto summoned his ka, Duos, to intervene. Seto ordered the prisoners to stop, but they took the chance to get revenge on him. Duos cut the chains supporting the arena platform, causing Five-Eyed Horned Ogre and its host to fall to their deaths. Kisara fainted from the shock, but was saved from falling, as Seto held her arm and one of the chains. As Gudoul prepared to kill Kisara and Seto, The White Dragon emerged.[7] As Gudoul prepared to cut the chain Seto was holding on to, Seto tried waking Kisara to get her to command the dragon. However Gebelk advised against this. He figured that while under normal circumstances a conscious person used their ba to control their ka, in Kisara's case, The White Dragon is an out-of-body manifestation of the her ba, only capable of roaming while she sleeps. The White Dragon attacked and killed Gudoul and its host, saving Kisara and Seto.[8]

As Kisara was taken back to her room, Seto and Akhenaden discussed what to do with her. They hoped that they could harness the power of The White Dragon to counter Bakura's Diabound. Akhenaden theorized that the ba of The White Dragon is possessing Kisara, using her as a vessel and that they needed to make Seto become its new vessel. However Seto realized that that would leave Kisara as a soulless body, resulting in her death. Akhenaden was willing to make that sacrifice as part of a ploy to have Seto become the new pharaoh, but Seto dismissed the idea, suggesting they focus on finding what happened to the current pharaoh, Atem, first.[8]

Seto was watching over Kisara when one of the guards alerted him that the pharaoh had been found alive. Seto was puzzled by the malicious nature of Akhenaden's intentions for Kisara and had her moved to another room for her safety, instructing the guard to not tell anyone else her new location. This proved effective as Akhenaden later went to Kisara's old room and killed the guard on duty after learning Kisara had been relocated. (The scene where Akhenaden goes to her room is only present in later Japanese printings, starting with the bunkoban.)[9]

After Akhenaden pledged loyalty to Zorc Necrophades, he kidnapped Seto and tried to brainwash him into usurping Pharaoh Atem. Instead, Seto freed Kisara and told her to flee. However Akhenaden killed her as she tried to run. When Akhenaden took over Seto's mind, Kisara used her spirit dragon to destroy Akhenaden and free Seto from his mind-control. She then pledged to serve him in this form, making him the new keeper of The White Dragon.

After her death, Seto held Kisara's lifeless body in front of The White Dragon's stone slab.

During the Battle City tournament, Seto Kaiba saw a vision of Seto holding Kisara before the slab.

During the Shadow RPG, events from ancient Egypt were replayed in the World of Memories. Yugi Mutou, Katsuya Jonouchi, Anzu Mazaki and Hiroto Honda witnessed Kisara being stoned. However they were unable to interact with people of the world, making them physically incapable of touching Kisara or her attackers.[2]

Kazuki Takahashi has stated that he originally planned for the story to have further explored the relationship between Seto and Kisara (including a subplot where Seto rebels against the pharaoh to avenge Kisara's death), but in order to meet a deadline these details had to be cut.

According to Takahashi, Seto's feelings for Kisara are the basis of Kaiba's modern-day obsession with the "Blue-Eyes White Dragon."

Kisara partook in the following Diaha.