"Name unknown", known as the mysterious assassin (謎のアサシン nazo no asashin) in the Japanese version is a character in the Yu-Gi-Oh! manga.

He, along Johnny Gayle and Bob McGuire were hired by Seto Kaiba to play a shootout game against Yugi Mutou.

The man formerly worked as an assassin. None of his targets were still alive, when he was hired by KaibaCorp.[1] 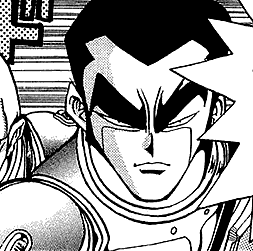 The assassin in the Stardust Shootout.

He was hired for the Death-T theme park at Kaiba Land, which was created to kill Yugi Mutou. The assassin was put on a team with Johnny Gayle and Bob McGuire to face Yugi and his friends in the first stage of Death-T. Each of them were promised a bounty of ¥10,000 for each opposing player they killed. The assassin planned to kill all three, so he could claim the three bounties for himself.[1]

Seto Kaiba rigged the game so that the three men on his team had real lasers that cause fatal electric shocks when fired, while Yugi and his friends were given toy guns.[1]

Gayle moved out first, saying that they should leave it to him, as he was an expert in guerrilla warfare, but Jonouchi took out Gayle by kicking him in the face, after running along the tops of the walls. Seeing this, the assassin and McGuire started shooting at Jonouchi.[2]

Once Honda realized his team's guns did not work, he called his team back for a timeout. Honda returned by himself afterwards, dropping his gun and offering to surrender. However the assassin laughed that was no use, with the bounty for killing Honda in mind. Johji, who was hiding on Honda's back, tossed him Anzu Mazaki's operational gun, which Honda used to take out the assassin and McGuire. Since Honda had previously set the laser to a non-lethal voltage, the assassin and McGuire were not killed.[2]

In the Toei Yu-Gi-Oh! anime, "name unknown" is replaced with Blue.