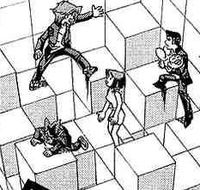 Jonouchi, Yugi, Anzu, Honda and Johji in the room of falling cubes.

The room of falling cubes was the game used in the third stage of Death-T.

The room is square shaped, with 4 very high walls. There is a hole on one of the walls, estimated by Yugi and his friends to be about 10 meters off the ground. The floor and walls are lined with grids of squares. The floor is 5x5 of these squares. The hole is about 9 squares above the ground.

The ceiling is high off the ground. Giant cubes were dropped from it during the game. The room was too dark at the top for Yugi and his friends to see how high it was or what was up there.

The idea of the game was to dodge cubes as they fell from the ceiling. As the cubes fill up the room, the players have to climb on top of them and make their way up to the hole in the wall to escape.

Unlike some of the earlier games in Death-T, there wasn't much room for teamwork. Kaiba considered Yugi and his friends' numbers a liability in this game, thinking that if someone was to stop and worry about a friend they would get squashed.

Yugi, Anzu, Honda, Jonouchi and Johji arrived at this room after completing the Horror Zone. Johji had fallen asleep at this point.

The group didn't know what the game was going to be and sat in the room for a long time waiting for something to happen. They used this time to reflect on how their lives have changed and Anzu drew the symbol of friendship on their hands for them to remember being together.

At the beginning of the game, the group tried to dodge the cubes, believing that they were falling randomly and passed Johji, who stayed asleep, around as they did so.

Anzu, being a trained dancer, was able to read rhythms and eventually noticed that the cubes were falling to a rhythm. The rhythm was to a simple dance. Yugi believed that the mechanism of the game must have been too complicated for the computer program controlling the game, so it had to use a simple dance, rather than a complex one. Anzu was able to predict where the next cubes would fall, allowing the group to easily dodge them.

When the group got near the exit, the rhythm suddenly changed and a cube landed near Honda, trapping his coat below it. Honda didn't tell anyone, until he ensured that everyone else got out. Unable to move, he said that that was as far as he goes. A cube then fell in front of the exit hole, blocking it off.

Mokuba later came and helped Honda to repay Yugi for saving him from Kaiba's Experience of Death by Virtual Reality Penalty Game.