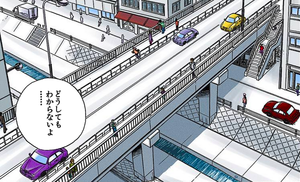 The bridge underpass ( hashishita) is a location in the Yu-Gi-Oh! manga and anime. It is located in 350 West Block "E" of Domino City.[1]

Yami Yugi Dueled Marik Ishtar, who acted through Strings, in this location.[2]

In Yu-Gi-Oh! Duel Monsters 4: Battle of Great Duelist, the bridge underpass is the setting of the second campaign stage.

The player can Duel Seeker, Pandora, Strings and Isis Ishtar here and must defeat each of them five times to unlock the boss stage, featuring Maximillion Pegasus.

In Yu-Gi-Oh! The Sacred Cards, the player was able to travel to the bridge after meeting Marik Ishtar at the toy shop. Seto Kaiba defeated a generic Duelist at this location and his fan traveled there after learning Kaiba's whereabouts. The player defeated Strings here, after which they were able to travel to the aquarium, at the other side of the bridge. Optionally, the player could Duel against generic Duelists. The player returned later to defeat minor Ghouls, while searching for their captives, Joey Wheeler and Tea Gardner.