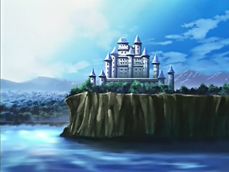 Schroeder Castle is a huge castle located on Germany, hosting the Schroeder family. It's in a mountainous region, surrounded by a forest, including a lake. It first appeared in episode 185 in KC Grand Championship arc, showing Zigfried von Schroeder inside of it. It also appeared in both Leon and Zigfried's past memories.

The castle has many locations, usually used by Zigfried. It has a big hall, many rooms, a pool, a library, a garden, and an airfield for Zigfried's private jet.