Domino Pier is a landmark in Domino City. Some of the main characters have begun life changing experiences or come to great realizations at this point.

Yugi Muto prepared to depart to the Duelist Kingdom tournament at Domino Pier. Joey Wheeler tried to make his way onto the ship, but was refused entry as he wasn't invited to the tournament. Yugi handed one of his Star Chips to Joey, allowing him to enter. Téa Gardner, Tristan Taylor and Bakura Ryou all managed to stowaway onto the ship here too.

Yugi and Joey's Duel at the pier.

During Battle City, when Joey and Téa were possessed by Marik Ishtar they lured Yugi here. Yugi and Joey were forced to Duel, while strapped to an anchor. Defeating their opponent would release a key to save themselves. After a timer hit zero, the anchor would drag the whatever players are strapped to it into the water to drown. Yugi fights the Duel without Yami Yugi's assistance. He manages to snap Joey out of Marik's control, but drops his own Life Points to 0, to save Joey. Joey fully snaps out of Marik's control and forces the Duel into a draw. With seconds left, he swings across to grab Yugi's key. Both players are dragged into the water. Joey unlocks Yugi, saving him, but the key won't work in his own shackle. In the manga, Seto Kaiba drops the other key into the water for him to save himself. In the anime, Joey's sister Serenity arrives and removes her bandages in time to see what's going on. She grabs Joey's key and dives into the water to save him.

Yugi tells Yami, how he and Joey, defeated Marik together. Impressed with Yugi's performance, Yami thinks to himself, that he has learned from Yugi, that in kindness lies the greatest strength of all and thinks one day Yugi will surpass him in every way. Joey on the other hand is ashamed of himself for nearly killing his best friend and thinks Serenity shouldn't even look at him. Mai Valentine scolds Joey, and slaps him for easily throwing away his pride as a Duelist. His friends remind him that he's at the pier, where they departed for Duelist Kingdom. It was here where he took his first step to becoming a true Duelist.

This location reappears in Yu-Gi-Oh! GX. After his second Duel with Sartorius, Jaden Yuki ends up here, where he Duels Jesse Anderson. Due to a tainted "Polymerization" card, Jaden is hallucinating at this point, and believes Jesse to be Trueman. After that card falls off the Duel Disk, he comes to his senses and the Duel is stopped, though Jesse could have won at that point had the Duel continued.

In Yu-Gi-Oh! Destiny Board Traveler, Domino Pier is an stage which can be unlocked by winning 1 game with Joey Wheeler. While a player steps on a special zone, "Meteor Strikes" hit random players, lowering their Life Points. 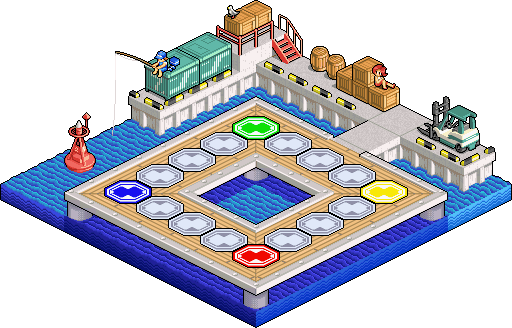 In Yu-Gi-Oh! The Sacred Cards, Joey Wheeler and Tea Gardner were taken to the pier, by the Ghouls, after being brainwashed by Marik Ishtar.

At the pier, the Ghouls defeated a Duelist and took all his good cards. This caused him and his companions to hide in a warehouse.

Yugi Muto and Joey Wheeler went to the pier, to save Joey and Tea, after Seto Kaiba identified it as the location of Joey's Duel Disk. When they arrived, they were confronted by Bandit Keith and and a group of ghouls. The player defeated Keith and Yugi defeated the other Ghouls. Yugi was then forced to accept a Duel with Joey, where the loser would be dragged to the bottom of the ocean, as refusal would result in Tea swallowing a suicide capsule. Yugi accepted the Duel, but could not bring himself to beat his friend and was dragged into the water. However the player dived in and saved him. Joey then challenged the player to a Duel, but was defeated. Marik threatened to dispose of Joey, but Yugi was able to return Joey to his old self by reminding him of the promise he made to meet him and the player in the finals.

Mako Tsunami came to pier at some point after being defeated by the player at the aquarium. He liked watching the sea, as it calmed his soul. The player could repeatedly challenge him to Duels there, after defeating Brainwashed Joey.

After leaving the Ghouls, Keith hung out in a warehouse at the pier, where he reflected on his fall from grace. After losing another Duel to the player, he said that it was all over.