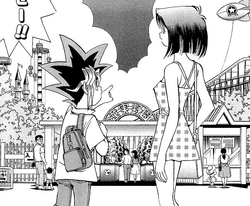 Domino Park (童実野園 Domino En) is an amusement park in Domino City in the Yu-Gi-Oh! manga and Toei anime. In the Toei anime, it is called Domino Amusement Park (ドミノ遊園地 Domino Yuenchi).

Yugi Mutou and Anzu Mazaki had their first "date" together att Domino Park. Anzu spent most of the time trying to make Dark Yugi appear. Although much to her dismay, he did not. When Anzu got onto the Ferris wheel where the Playing Card Bomber was hiding, the bomber threatened to blow up the Ferris wheel. Dark Yugi took over and by playing a card game stopped the bomber by winning. He saved Anzu and the other passengers, one being the bomber who was caught.