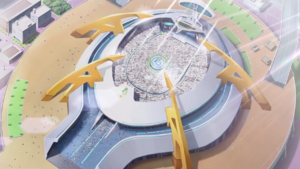 The KC Stadium (スタジアム Kē Shī Sutajiamu)[1] or Kaiba Corporation Stadium is a venue in the Domino City Kaiba Land, appearing in Yu-Gi-Oh! The Dark Side of Dimensions.

A Duel taking place in the stadium

Kaiba had his staff at KaibaCorp organize an event to exhibit the new Duel Disk model. Isono later confirmed that it would be a Dueling competition at Kaiba Land.[2]

While reconstructing the Millennium Puzzle, Kaiba discovered two pieces were missing. The suspected holders, Aigami and Yugi Mutou were abducted and instructed to go to the stadium, respectively to take part in the exhibition.[2]

The stadium was packed on the day of the exhibition. Among those in attendance were Katsuya Jonouchi, Anzu Mazaki, Hiroto Honda, Insector Haga and Dinosaur Ryuzaki. The exhibition opened with an air show, with the audience initially uninformed that the jets were Solid Vision projections. One of the jets appeared to be crash landing, only to be destroyed by a solid vision "Neo Blue-Eyes Ultimate Dragon".[2]

Kaiba intended to Duel both Aigami and Yugi at the stadium to acquire the Millennium Puzzle pieces. However Yugi insisted on Dueling Aigami. Yugi defeated Aigami and his Duel with Kaiba was interrupted by the appearance of Dark Diva, whom Yugi and Kaiba Dueled together.[2]