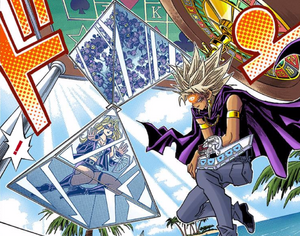 Mai's soul room was a location inside Mai's mind where Dark Marik took her to suffer a Penalty Game. It consists of a beach paradise with a wooden bridge connecting it to an island. It also contains casino equipment[1] as an objectification of Mai's time as a casino dealer.[2] 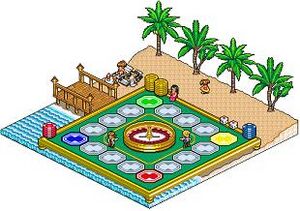 The Desert stage in Yu-Gi-Oh! Destiny Board Traveler.

The location appears as a stage in the video game Yu-Gi-Oh! Destiny Board Traveler, where it is referred to as Desert or Sandy Beach (砂浜 Sunahama) in the Japanese version.

The Desert stage is unlocked by winning 1 game with Mai Valentine. When a player stops on a Special Zone, a random monster from the sandy side of the board may be sent to the Graveyard, causing the player lose all the stars for that monster.