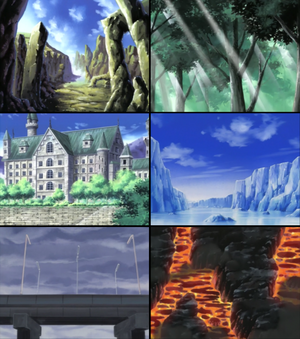 Noah's Virtual World is a world existing in cyberspace, originally created by Gozaburo Kaiba to save his son Noah after he was hit by a car. It was destroyed after the fortress where its servers were located was hit by a missile. It only appears in the Yu-Gi-Oh! anime as it is the setting for the Virtual World arc.

Originally, the world was simply a replica of Noah's bedroom for him to live in. However, it was later expanded to include a full city with virtual residents. Eventually, Noah expanded it further until it included various environments and landscapes which he could control and manipulate at will. The numerous environments included forests, motorways, a canyon, a volcano and a castle. It was possible to move between these environments through portals which took the appearance of a wooden door. The exits to the real world were located in a virtual Domino City arcade.

When residents of the Virtual World were about to Duel, a Duel Disk would materialize on their left arm (unless they were already wearing one). Because Yugi and his friends did not have their own Decks in this world, they had to build one by selecting from rows of cards which appeared in front of them. Because only officially released cards could be chosen, no Egyptian Gods could be used; Leichter claimed they are forbidden cards in this realm.

The world's servers were located in an underwater fortress in the middle of the ocean which could rise up out of the water when necessary. To enter the virtual world, people had to enter pods which would upload their minds to the computer. Some residents of the virtual world did not have physical bodies (usually because they were dead) so their minds were essentially trapped in the world until they were given a real life body to leave in. It was possible for people whose minds were trapped in the virtual world to steal the bodies of people in the pods.

Gozaburo had uploaded Noah's mind to the world after his body died in a car accident. At this point the world only consisted of Noah's bedroom. Gozaburo expanded it for Noah to the point where he could even go to Mars. However, at the same time, Noah was expanding it himself because of his frustration with its glitches and limitations. Shortly afterwards, Gozaburo stopped paying attention to Noah when Seto Kaiba was adopted.

When Gozaburo lost KaibaCorp to Seto, he uploaded his own mind to the virtual world and promised Noah he could inherit KaibaCorp if he proved himself better than Seto. However, in reality he was manipulating Noah for his own goals.

When Noah had lived in the virtual world for six years, The Big Five's minds were trapped in cyberspace after they lost to Seto in Duel Monsters. Noah uploaded their minds to his world and they joined together with a common goal: to take down Seto. Noah wanted to prove he was better than Seto, while the Big Five wanted revenge and the chance to escape to the real world in other people's bodies.

During the Battle City finals, the KaibaCorp blimp was hijacked by Noah and the people on board (Seto, Mokuba, Yugi, Joey, Téa, Tristan, Duke and Serenity) were forced into the virtual world where they were made to Duel the Big Five. If they lost, they would have to surrender their bodies so the winner could escape to the real world.

Each member of the Big Five was beaten by the group. They lost and then Dueled together as a team, before losing again. This angered Noah, as it meant he could not prove he was better than Seto. Noah deleted them for their failure (in the dub, he banished them each to an isolated part of the world).

Noah Dueled Seto himself, and although he beat Seto, Yami Yugi took his place as Noah had cheated to win. Yugi beat Noah and at this point Gozaburo showed himself and told Noah of his true intentions: to conquer the world by hijacking all the missile systems via his computer network, while he remains safely inside the virtual world (in the English dub, to have control over everyone in the world by trapping them all in virtual reality where he will be the ruler).

To foil his father's plans, Noah escaped to the real world in Mokuba's body and launched a missile towards the fortress where the virtual world existed within. Noah was able to help Seto and his friends escape the virtual world before it was destroyed.

To stop Gozaburo from escaping to another computer network and continuing with his plan, Noah trapped the both of them in the virtual world as the missile destroyed it, deleting, therefore killing, them both.