From Yugipedia
Jump to: navigation, search
This article is about the location. For the chapter, see "Murderer's Mansion" (chapter). 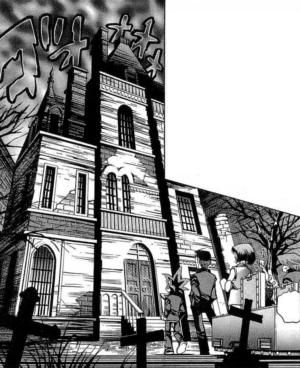 The Murderer's Mansion (, Mādāzumanshon) was a Victorian style building in the Horror Zone of Death-T, appearing in the manga.

The eponymous murderer is the Chopman.[1]

The front doors of the mansion can be slammed shut and locked from remote access.[1]

Th basement is accessed via the trapdoor. It contains a corridor, leading to the exit and a chamber, which also has a door capable of slamming shut from remote access.[2]

The chamber in the basement is a circular room, lit by candles on the walls. The floor is flooded with tar, there is a small pillar in the center of the room and an array of weapons hang from the ceiling, including a scythe, a flail, a machete, a chainsaw and an axe.[2]

Seto Kaiba hired the Chopman to manage the Murderer's Mansion attraction at Death-T, while he was a wanted criminal at large.[2]

Yugi and his friends who had been participating in Death-T, were taken to the mansion on the Electric Chair Ride.[1]

Inside the mansion, while looking for a way out, Yugi found a piece of paper, which seemed to have the word "bllood" on it. A hologram of Kaiba appeared and told them about the Chopman's crimes and that he is hidden in the mansion. Next he directed their attention to four holes, telling them to put their hands inside them. Once in, the players' hands were trapped and they noticed they had put them inside the guillotine. Kaiba left them to solve the bllood puzzle to free themselves and find the exit. Yugi managed to solve the puzzle in the nick of time.[1]

After the trapdoor opened, the Chopman pulled Johji inside and used him as bait to force one of them to fight him in the chamber, while handcuffed together. Jonouchi volunteered and managed to beat Chopman, by using a candlestick holder to pick the door and his end of the handcuff's lock, while the Chopman's chainsaw got stuck. Jonouchi used the Chopman's strength against him, by forcing him to rip open the door, which he had fastened his end of the handcuff to. As Jonouchi got out, the candlestick hit the tar on the floor, setting the Chopman alight.[2]

The group left the mansion and proceeded to the next stage of Death-T.[3]