"Murderer's Mansion" (の Mādāzu no Manshon) is the thirty-first chapter of the Yu-Gi-Oh! manga.

Yugi and his friends enter the Murderer's Mansion stage of Death-T.

Yugi, Honda, Anzu, Johji and Jonouchi arrive at the Murderer's Mansion for the next game. Yugi wonders what kind of traps Kaiba has in store for them inside. 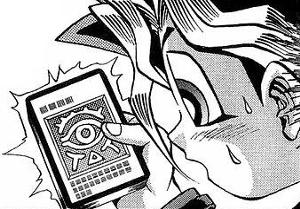 Yugi feels a heartbeat in the cards.
The card is "The Eye of Truth".

Yugi feels something vibrating in his pocket. He pulls out his grandfather's cards and is astonished to find he can feel a heartbeat through the cards. His friends gather around and ask if something is wrong. The cards are telling him that his grandfather is in critical condition, he tells his friends. His friends look at him in shock and ask what he means, apart from Johji, who lies carefree in Anzu's arms, picking his nose. Yugi recalls his grandfather saying that his soul was in these cards and vows to defeat Kaiba with the Heart of the Cards.

Jonouchi reminds the group that they cannot afford to wait around and insists that they get going. If what Yugi said about his grandfather is true, they must clear this stage quickly, Honda announces and kicks open the door to the mansion.

The group find themselves in a musty unlit old fashioned room. Anzu suggests that they stay still until their eyes adjust. The doors suddenly slam shut behind them. Anzu quickly checks them and finds that they are locked in. Jonouchi tries rattling at the doors after her and asks if anyone has a wire, so he can pick the lock. Anzu looks at him abashedly, commenting that he has some strange talents. Johji yells at Jonouchi in degradation, asking why he's trying to open the door they came in. He calls him a dummy and says that they must find the exit. Honda agrees and the group split up to find a way out. 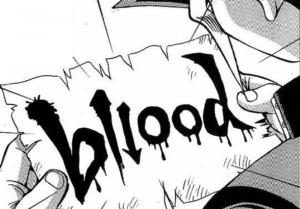 While everyone searches around, Yugi finds a sheet of paper attached to a suit of armor. "Blood", seemingly misspelled as "Bllood" is written on the paper. The second l is also an arrow pointing downwards. Yugi wonders what it means, and interprets it as a bad omen.

Jonouchi reports that there is no way out. Honda goes upstairs to check for an exit, but finds that the ceiling blocks him going any further at the top of the stairs.

A projection of Kaiba appears and welcomes the group to the Murderer's Mansion. Jonouchi is surprised to see Kaiba floating midair, but Yugi informs him that it is just a hologram. Kaiba observes that they are searching for an exit and warns them that something bad will happen if they do not escape soon. 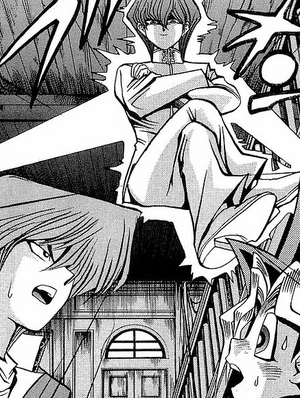 The hologram of Kaiba

Kaiba prepares to explain why the place is called the Murderer's Mansion, asking the group if they remember what happened last summer at the camp near Domino Lake; terrible murders which had all of Domino City cowering in fear. Ten boy scouts, who had been staying at the camp were murdered in one night. Kaiba describes the brutal nature of the deaths, saying that not even a master of puzzles would have been able to assemble the body parts back into human form, as mince meat had been made of the boys. The suspect of the crime came to be known as "The Chopman" and he is still at large, Kaiba informs them.

The group look up in fear at Kaiba, who smirks that they have already guessed it; the Chopman is hidden in the mansion. Cruelty is considered an asset at KaibaCorp, so they scouted the Chopman to manage this attraction, in the theme park of death, he laughs and asks if they will be able to escape the mansion without running into the Chopman.

To make it fair, Kaiba says that he will give them a hint to help find their way out. He directs them to the wall behind them, which contains four holes, labeled 00, 01, 10 and 11. There are switches on the other side of the wall. If they press the right one, the location of the exit will be revealed. Yugi is certain that this is a trap, but with no other option, he, Jonouchi, Honda and Anzu put their hands inside the holes. 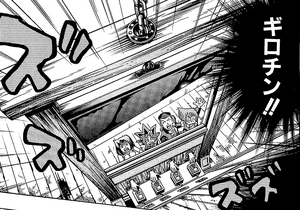 Locks are suddenly cuffed onto their hands, preventing them from pulling their hands back out. The group then notice a giant guillotine overhead. Kaiba laughs and announces the start of the game. He explains that one of the switches is real, the others will cause the blade to drop and slice off their hands. He gives them five minutes to find the right switch, before the blade drops itself. They can only press one switch, he tells them. As the hologram fizzles, Kaiba says that he has left them a hint hidden in the room. He wishes them luck and the hologam vanishes.

The friends are left struggling to figure out which is the correct button. Yugi wonders what the numbers could mean. They are all ones and zeroes, Anzu notes, like a computer code, whose name escapes her. Jonouchi starts to lose his cool. Honda recalls that Kaiba had told them that there was a hint hidden in the room. Yugi remembers the slip of paper and takes it out, thinking it could be the hint. He shows it to the others. Honda curses. He hates games involving numbers and letters. Anzu assures Yugi he can solve, since he managed to solve the Millennium Puzzle. Johji looks at them unperturbed, picking his nose.

Yugi focuses on the double L in the word, thinking the answer must be to do with the misspelling. Honda alerts him that they have only two minutes left. Yugi concentrates and Johji yawns. With only one minute left, Jonouchi hurries Yugi up. Yugi starts to doubt himself and asks why Kaiba did this. He then remembers that his grandfather is waiting for him. Honda yells that there is no more time. Yugi vows to save everyone.

Time runs out and the blade starts to move. The answer suddenly hits Yugi and he tells Anzu to press her button. Anzu complies and the blade stops, much to everyone's relief. The cuffs are unlocked, releasing everyone's hands. Yugi breathes a huge sigh of relief and Anzu asks how he got the answer. 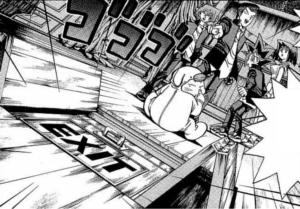 The exit is revealed.

At first he kept thinking about the meaning of the word "blood", Yugi explains, but the shape of the letters was what was important. The word was made up of ones and zeroes; "bllood" could be looked at as "10 11 00 01". The second L was also an arrow pointing down, so the exit must be in the basement. The right answer was the eleven, which had the arrow in it and corresponded to Anzu's switch.

The floorboards behind Johji, fold away on hinges, revealing a hidden trapdoor. The others celebrate that they now have a way out, while Johji calls to the ordeal boring.

Unbeknownst to Johji, the trapdoor opens behind him. Inside is a figure with glowing eyes and crooked teeth.

Episode 23 of the Toei anime, "Capmon King! The Decisive Battle", is based on a portion of the manga's Death-T arc, including this chapter.

A number of differences were made, including: