"Russian Roulette" is the twenty-sixth chapter of the Yu-Gi-Oh! manga.

Seto Kaiba invites Yugi and Jonouchi to his mansion, where they are to be treated as V.I.P.s for the grand opening of his secret project the next day. Mokuba still comes across as sinister, but invites the guests to a meal.

Yugi rubs his jaw which is still sore from when he got punched at the arcade. Jonouchi asks if he is okay and Yugi replies that he is feeling a lot better since Jonouchi got the Millennium Puzzle back for him.

As they walk down the street, a limousine pulls up beside them. The chauffeur steps out and addresses them as "Master Yugi and his friend", telling them that Master Seto has requested their presence at his house. They are both surprised, but get inside the limousine regardless.

Yugi and Jonouchi, still injured from their encounter with Street Fighter, wonder why Kaiba is inviting them.

Jonouchi asks why Kaiba is inviting them to his house. Yugi is unsure and notes how Kaiba has been absent from school lately. The chauffeur explains that this is because Kaiba has been busy, working on an important project, as he is the president of KaibaCorp. Jonouchi is startled that Kaiba, who is still in high school is the head of the biggest amusement company in the business. Yugi asks what KaibaCorp is and Jonouchi explains that that it is one of the top companies in the world in the toy and gaming business. That's why Kaiba is proud of being a gamer, Yugi realizes.

Mokuba turns around, revealing he had been sitting in the front seat, unbeknownst to Yugi and Jonouchi and tells them that he is the vice president. He says that it has been a while and he had fun the other day. Yugi is even more astonished to find Mokuba, a grade schooler is the vice president. Mokuba introduces himself, having not told Yugi his given name the last time they met.

Yugi gets a bad feeling, as he knows the two Kaiba brothers don't like him that much. Mokuba tells Yugi to relax, insisting that he will be given V.I.P. treatment. He informs them that the project Seto was working on is finished and the opening ceremonies are tomorrow. His thoughtful considerate brother wanted his two friends to be the first to enjoy it and as such has given them a special invitation, which includes the pre-opening celebration tonight, Mokuba tells Yugi and Jonouchi.

Yugi asks what the project is, but Mokuba laughs that it a secret. To himself, Mokuba thinks their project is to get revenge on Yugi; this is Death-T.

The limousine arrives the Kaiba family mansion. Yugi and Jonouchi are astonished by its size. Inside, they are welcomed by a group of servants. The butler says that Seto has requested that they make Yugi's stay as pleasant as possible. Mokuba is surprised to find Seto has left to his room, rather than attend the pre-opening ceremony. The butler reminds Mokuba that Seto has been working nonstop and believes it would be best not to disturb him.

With Seto unavailable, Mokuba says that Yugi and Jonouchi shall be his guests tonight. To Jonouchi's delight, he butler suggests that they prepare a meal. Seeing Jonouchi's enthusiasm, Mokuba asks why he didn't say something sooner and offers to treat them to the best food in the world. Mokuba orders the butler to prepare the meal. While Yugi and Jonouchi celebrate, Mokuba laughs sinisterly to himself, saying that they are both going to enjoy this. Nobody beats him in Capsule Monster Chess, Mokuba thinks and smiles that he will be getting payback tonight. 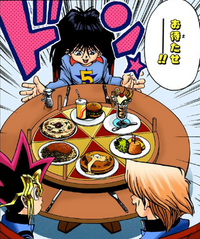 Mokuba presents Yugi and Jonouchi with the meals.

Jonouchi and Yugi are disappointed to be presented with a table of six childish meals; a chocolate parfait, a hamburger, a pizza, spaghetti, pancakes and a kiddie lunch. Jonouchi who had been hoping for some royale cuisine, realizes this is exactly what a spoiled kid would think of. Mokuba asks what they think and invites them to dig in. However he says that that is what he would like to say, but thinks that wouldn't be interesting and suggests that they play a game.

Mokuba shows them that the meals are on a turntable. He suggests that they each take turns spinning the table and eat the meal that stops in front of them. Jonouchi asks if any of the food has been poisoned. Mokuba chuckles that it would be rude of him and he would never treat a guest that way. In fact there is a treasure hidden in one of the meals, he says and whoever finds it wins.

Jonouchi agrees to play and is given the first turn. He spins the table, which to his disgust stops with the kiddie lunch in front of him. Mokuba insists that he must clean his plate, as per the rules of the game. Jonouchi begrudgingly starts to eat, but is surprised to find it tastes good. However something happens and he clutches his chest, before falling unconscious.

Mokuba laughs that Jonouchi found the prize and that he had lied about the poison. He calls this game Russian Roulette Dinner, because if you eat the wrong thing, you die of poison in 30 minutes. Mokuba holds up a vial, explaining that it is the antidote, Yugi needs to save Jonouchi and Yugi must win the game in order to get it. Mokuba is thrilled as he sees Yugi change to Dark Yugi, thrilled that he is going to defeat the other Yugi.

Dark Yugi threatens that this time Mokuba is dead. Mokuba laughs that those are big words. He points out that there are five more dishes left, one of which contains another prize and it is now Yugi's turn.

Yugi spins the turntable and is given the spaghetti. He worriedly eats it. Afterwards Mokuba notes that he is safe, so the poison must not have been in the spaghetti. He sneers, asking Yugi if it was tasty; a meal where you could live or die. After eating, one is glad that they did not die, he says, so this meal makes you experience the joy of living, which is what makes the "best meal in the world". 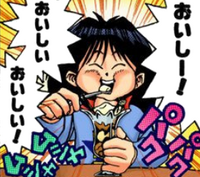 Mokuba eats the parfait without worrying.

Mokuba takes his turn. He taps a syrup bottle, before spinning the table and is given the chocolate parfait. He happily starts eating it quickly.

Yugi realizes that Mokuba isn't nervous at all, despite the danger of the game and suspects that Mokuba is up to something. He wonders if the syrup bottle, Mokuba touched was of any significance. He asks Mokuba what's in the bottle. Mokuba is slightly stunned at first, but points out that there are pancakes. Yugi asks why it empty. Mokuba laughs that it will be filled for the first time when Yugi loses, for as they "the suffering of others makes the sweetest syrup".

After finishing the parfait, Mokuba reminds Yugi that it is now his turn. He is relieved that he managed to bluff about the syrup bottle, which is in fact a switch that lets him stop the table when he wants. The poison is in the hamburger, he thinks, which shall stop in front of Yugi next turn.

Yugi decides that they should finish this in one go; on the next turn, they should both eat the dish that stops in front of them. Mokuba agrees and Yugi spins the turntable. Mokuba thinks that Yugi is a fool, no matter how hard he spins he will be given the poisoned hamburger, thanks to the hidden switch. 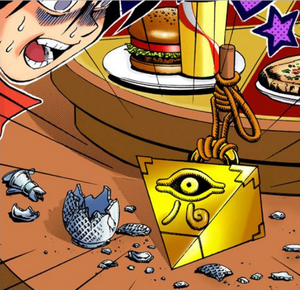 The syrup bottle, smashed by the Millennium Puzzle.

There is a crashing noise and Mokuba looks down to see the syrup bottle has shattered. Yugi thinks to himself that there is no longer any cheating involved and the game shall be down to luck. The hamburger stops in front of Mokuba, who now sees the Millennium Puzzle tied on the turntable, which he realizes is what broke the switch.

Yugi proceeds to eat the pancakes. He finishes them and finds himself unpoisoned. The rules were to clean your plate, he reminds Mokuba who hasn't touched the hamburger. Mokuba is fuming, but picks up the hamburger and takes a bite. The poison kicks in and he falls over. Yugi takes the vial, while the butler and another servant come to Mokuba's aid.

The mystery project starts tomorrow, Yugi thinks and wonders what Kaiba is planning.