"Don't Draw That Card!!" is the sixty-first chapter of the Yu-Gi-Oh! manga. In its first English printing, it was numbered as the second chapter of Yu-Gi-Oh! Duelist. In the 3-in-1 edition, its number was changed to match the original Japanese printing.

This chapter was originally printed in the Weekly Shōnen Jump magazine in Japanese. It has been reprinted in in volume 8 of the tankōbon and volume 5 of the bunkoban.

Dark Yugi continues to Duel Pegasus through the TV, but Pegasus is able to predict Dark Yugi's moves. 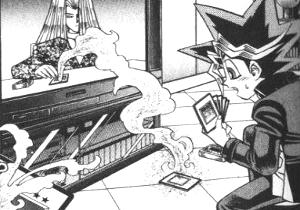 "Koumori Dragon" gets sucked into the TV.

Yugi's "Koumori Dragon" has just been sucked into Pegasus's "Dragon Capture Jar". Pegasus explains that he knew Yugi was going to play "Koumori Dragon", so he stole it with his "Dragon Capture Jar". Yugi switches to Dark Yugi upon realizing that this is a Shadow Game. Jonouchi, Anzu and Grandpa are all surprised, having realized the transformation.

Yugi wonders how someone prerecorded on a videotape is able to read his cards. Pegasus calls Yugi gloomy and asks why he is so angry all the time. He insists that it's just a game, so they should enjoy it. Yugi is annoyed by Pegasus making fun of him. Yugi's friends think Pegasus just guessed the card through dumb luck, but Yugi is certain that there is more to it than that; Pegasus is a Shadow Game player and can somehow read Yugi's cards.

Grandpa recalls what he knows about Pegasus; He is the genius game designer, who started Industrial Illusions; a small game company which changed into an empire with the creation of Duel Monsters. However the rest of Pegasus' background is a mystery. This is the first time Grandpa has even seen his face and wonders why this man is challenging Yugi.

Pegasus insists that they continue the game. Yugi agrees and draws his next card, "Baby Dragon".

With "Dragon Capture Jar" in play, Yugi can't use any of his Dragons. 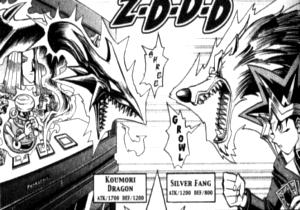 Pegasus says that he heard Yugi was good, but claims to know Yugi's strategy like the back of his hand and jokes that it must be a "jarring" for Yugi.

Enraged, Yugi Summons "Great White", a Water monster with 1600 ATK. Pegasus counters with "Oscillo Hero #2", who has just 1000 ATK. Jonouchi and Anzu cheer for Yugi, but Grandpa says that it's no good; Since "Great White" is a Water monster, its ATK will be halved when battling a Thunder monster, like "Oscillo Hero #2". The two monsters prepare to battle. Grandpa comments that it's not visible to the people watching, but an incredible imaginary battle must be taking place between Yugi and Pegasus. From Grandpa's perspective the 3D monsters are not visible. "Oscillo Hero #2" uses its "Electric Strike" attack to attack and destroy "Great White". Yugi's Life Points drop to 1300.

Frustrated, Yugi wonders how it is that Pegasus knows all his plans. Pegasus jokes that he understands Yugi's "shock", but this is reality and Yugi cannot defeat him.

Pegasus feels that it is now time for him to tell Yugi the other reason why he challenged him; If Yugi loses the game, he must take part in a tournament Industrial Illusions is holding. This event will determine the true champion of Duel Monsters; The Duelist King. He had been hoping that Kaiba would come too, but he hears that Kaiba is not going to recover from his condition. The person who becomes "King" will also win a large sum of money and something even more valuable. Yugi asks what happens if he refuses, but Pegasus shakes his finger and says that Yugi can't refuse, because he can't beat him. Yugi smirks and retorts that he hasn't lost yet. Pegasus smiles and recommends that they keep playing. He compliments Yugi's enthusiasm and says that he knew he would say that.

Yugi draws his next card and once again wonders why Pegasus can read his hand. He gets ready to play "Undead Warrior". However he stops and realizes that he was about to play that card without thinking, he was depending on his sixth sense. He considers that what he's being led to believe is his sixth sense is his something opponent has planted in his mind. Yugi plays a card face-down in Attack Mode.[Note 2] Yugi turns to Grandpa, Jonouchi and Anzu, who haven't seen the card and asks them to use their sixth sense to tell him what it is. The three of them are surprised. They're not psychic and don't think they can do it. However Yugi insists that they say whatever pops into their head. Grandpa says that it's just a feeling, but he got the picture of a skull. Jonouchi says that he's thinking of a cool warrior. Similar to Grandpa, Anzu got the picture of a skeleton. Since two of the three of them guessed a Zombie monster, Yugi is certain that this isn't a coincidence and thinks he understands how Pegasus has been able to see his cards.

Pegasus begins his turn. He says that he hates to repeat himself, but Yugi played a Zombie card. Grandpa, Jonouchi and Anzu are surprised, since that's what they had guessed. Pegasus Summons "Rogue Doll" and says that she obliterates all Zombies with her "Holy Light of Shining Chaos". 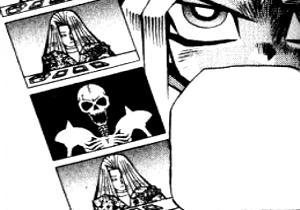 Yugi explains to the spectators that Pegasus has inserted frames into the film and is using subliminal messages. For example Pegasus inserted a monster into the film for only a few frames. It only flashes on the screen for a few seconds, so they don't realize that they saw it, but subconsciously Yugi remembers the monster and choose its card.

Pegasus claims that the battle is his and he has won. However, Yugi flips over his face-down, the "Dark Magician".[Note 3] "Dark Magician" uses its "Black Magic" attack to destroy "Rogue Doll". Pegasus's Life Points drop to 1100.

Pegasus smiles and says that he also knew that it was about time Yugi would see through his trick. He compliments Yugi and says that he passes so far, but now he shall show him his true power. The artificial eye is once again barely visible from behind his hair.

Yugi tells Pegasus not to be a sore loser and calls him a big cheat.