"The Terror of Blue-Eyes!!" is the thirty-eighth chapter of the Yu-Gi-Oh! manga.

The crowd start cheering that the Duel is over as no card can beat the "Blue-Eyes White Dragon".

Kaiba says that it is painful to watch: As long as Yugi keeps playing his monsters in Defense Mode, it doesn't matter how many get slaughtered, his Life Points will stay the same, but all he is doing is prolonging his inevitable demise. Yugi thinks that Kaiba is right - if he plays a monster in Attack Mode, he will lose. Kaiba tells Yugi to play his next monster, anticipating him eventually running out of cards.

Yugi looks at his hand, unable to find a monster with an ATK score high enough. He then plays "Beaver Warrior" in Defense Mode.

Kaiba yells "Attack!", then pauses and asks if that is what Yugi expects him to do. Kaiba instead opts to draw another card and increase his army, rather than put "Beaver Warrior" out of its misery. Yugi worries, knowing this was bound to happen: Each of his monsters can only defend the attack of one enemy monster, but if Kaiba brings out more monsters, he won't have enough defenders to block all of them and will lose next turn.

Kaiba draws and says that it looks like the Goddess of Victory is on his side - he has drawn another "Blue-Eyes White Dragon", which he Summons. On his next turn, Kaiba plans to attack with the two of them and end Yugi's life. Yugi gulps - he can play another monster, but would be left defenseless the turn after, since the dragons can kill two of his monsters.

As Yugi thinks that he's lost, Kaiba smiles thinking that he has won. The audience also yell that Kaiba has won and there is nothing Yugi can do to stop it. As Jonouchi mentally urges Yugi not to give up until the end, Yugi closes his eyes and suddenly sees his grandfather. Yugi decides not to give up and believes that he is not fighting this Duel alone. 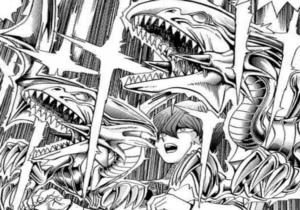 "Swords of Revealing Light" holds back the "Blue-Eyes White Dragons".

Yugi draws his next card, thinking everything rides on what it is. He gets the Spell Card "Swords of Revealing Light" and plays it, causing the swords to bind the dragons and prevent them attacking for three turns. Kaiba gets annoyed at Yugi's persistence at Jonouchi and Anzu compliment Yugi's move.

Kaiba remarks that Yugi has used up the last of his luck. He has only bound the dragons for three turns, and thinks that Yugi has nothing can he do in that short amount of time. Yugi thinks Kaiba is right, and that all he has done is extended his life.

Kaiba begins his turn and draws an unnamed kappa monster. Kaiba plays it in Defense Mode, sparing the pleasure of finishing Yugi off for the "Blue-Eyes White Dragons". Kaiba begins the countdown to Yugi's death and says that he has three turns. 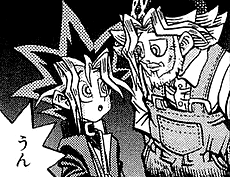 "Regular" Yugi drifts away from Dark Yugi and sees his grandfather, who asks if he's giving up and comments that it's not like Yugi. Yugi asks what else can he do, and Solomon reminds Yugi that he was suffering before, asking how he overcame that. Yugi replies that it was because of the Millennium Puzzle, prompting a nod from his Grandpa as he continues that Yugi put each piece of the Puzzle in its place. He didn't give up, believed in himself and competed the Puzzle, even though it took eight years. Grandpa says that there is nothing meaningless in the world, like pieces of a puzzle and the cards. Grandpa then walks away, leaving Yugi to wonder what he meant.

Dark Yugi gasps and suddenly realizes something: He wonders if the Deck could contain "Exodia", while a vision of Grandpa appears next to him, reminding him that there are no meaningless cards. Yugi looks at his cards and remembers something that Grandpa once told him: In Duel Monsters, cards usually work alone. One card Summons one monster. However there is one monster that is different. It is an experiment made by the makers of Duel Monsters, where you have to collect five cards in order to Summon it. A flashback shows Grandpa telling Yugi this and saying that the odds are against it - very few people know what the cards are for, and no one has ever collected all five and use them in a game, so nobody has ever seen the Summoned God Exodia.

Yugi looks at his hand again, noticing he has the legs and the left arm. He then understands that he must collect all the sealed parts of the body. Kaiba accuses Yugi of stalling and tells him to draw his card. Yugi draws and gets "Right Arm of the Forbidden One".

Kaiba notices that Yugi's expression has changed, but is still convinced regardless that there are no cards better than "Blue-Eyes White Dragon", so Yugi's last hope is like the flicker of a candle before it is blown out.

Kaiba begins his turn and draws "Judgeman". Kaiba finds it dull to leave it in his hand, so he Summons it to destroy Yugi's monster, saying the stress will do Yugi good. "Judgeman" attacks and destroys "Beaver Warrior" as Kaiba smirks and says that there are only two turns left.

Yugi draws "Dark Magician" and contemplates playing it in Defense Mode, but that won't be much use against two "Blue-Eyes White Dragons". Yugi instead Summons "Dark Magician" to kill the "Judgeman"; Kaiba comments that this is just the futile struggle of the condemned as "Dark Magician" uses its "Black Magic" attack to destroy "Judgeman". Yugi insists that he won't give up until the Duel ends, and he will take every chance he gets to chip away at Kaiba's Life Points, which are now down to 1000.

Kaiba says that it is the last turn and Yugi has no chances left; he then draws and Summons the third "Blue-Eyes White Dragon". It uses its "Burst Stream of Destruction" attack to destroy "Dark Magician", and Yugi gulps as he is left with 200 Life Points. Kaiba roars with laughter and tells Yugi to draw his last card - no matter what he gets, Kaiba claims, he shall die.

"Swords of Revealing Light" wears off at the end of Kaiba's turn, freeing the other two "Blue-Eyes White Dragons" to join in one final combined attack on the next turn as Kaiba joyously explains.

Yugi sweats and begins his last turn, with his life depending on what card he draws.