"The Poison Man" is the eight chapter of the Yu-Gi-Oh! manga.

The Junky Scorpion owner sold Jonouchi a pair of Air Muscle sneakers, then hired a gang to mug Jonouchi and rob him of them. When Yugi found out, Dark Yugi appeared to start a Shadow Game with the store owner.

Jonouchi follows a map, as he leads Yugi and Honda through some shabby back alleys. Honda asks where they are going, while Yugi wonders how safe this place is. Jonouchi tells them the place they are going is famous and the owner is said to be crazy for his stuff. The three eventually come to the Junky Scorpion.

Inside the shop, Jonouchi finds a pair of Air Muscle shoes. Honda does not see the big deal, but Jonouchi states that they are high-tech shoes, which are really popular. Honda is unperturbed, as long as it covers your feet, it is enough for him. 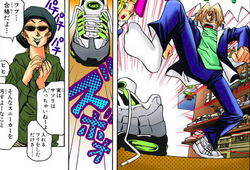 The store owner tells Jonouchi not to touch the shoes as they are not for sale. Those shoes, he says are incredibly rare and cannot be found anywhere else. Jonouchi objects that he has gotta sell him the shoes and he is after coming a long way to find the shop. There are more guys who want those shoes than there are stars in the sky, according to the owner, so he would not sell them to just anyone. If Jonouchi wants to wear those sneakers, he must show that he has got what it takes. Some guys will pay anything to get what they want and some will even kill, he continues and nods to his own shoes, saying that someone in America got murdered over the shoes he is wearing.

Jonouchi laughs sarcastically and asks if the owner's going to sell the shoes or not. The owner thinks to himself and suggests they play a game to see if Jonouchi has the right stuff. He removes the scorpion from the lace around his neck, explaining that it is real and poisonous and he shall put it in the shoe. He holds the shoe up to Jonouchi and asks if he has the guts to put his foot inside.

Jonouchi hesitates and says that he and his friends are not the Tokyo Shock Boys. Yugi and Honda try to talk him out of playing the game, but Jonouchi has had his eyes on the shoes for such a long time. Shouting that he will show the owner who has got no guts, he shoves his foot into the shoe. The owner applauds him and reveals that he did not really put the scorpion, it was just a test and he would never damage the shoes like that.

He agrees to sell Jonouchi the shoes. While they usually retail for ¥100,000 (about US$800 at the time), he will sell them for half price. Before Jonouchi leaves, the owner warns him about a gang called Muscle Hunters, who have been going around stealing shoes.

Jonouchi celebrates by skipping down the street in the new shoes, bragging about their comfort and how he traded his old pair with holes. Yugi is happy for him, while Honda still does not get the big deal and will not forget the guy who risked his life for a pair of shoes. He tells Jonouchi that kids do not even skip like that and it is embarrassing to walk with him. 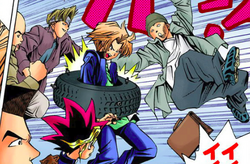 Jonouchi gets ambushed by the Muscle Hunters.

The group decide to get hamburgers, but are spied on by a group of Muscle Hunters. The three hunters run up to the group and shove a tire around Jonouchi's body from behind. One of them wallops Honda with a spanner. Another punches Yugi. With Jonouchi unable to defend himself due to the tire, the other one kicks him down and pulls off his shoes. The three thugs continue to beat-up Yugi, Honda and Jonouchi and leave with the shoes.

Jonouchi apologizes to Yugi for getting him into this and inquires if he can get home alone. Yugi asks about him and Honda. Jonouchi and Honda stand up proclaiming that they want revenge. Yugi says he will go with them, if he is not in the way. Jonouchi compliments him on being a man and the three take off after the hunters.

They find and approach the hunters in a video arcade. Jonouchi says that they do not attack from behind like cowards and hits the one who attacked him earlier in the face, breaking his nose. He pleas with Jonouchi to stop, but Jonouchi kicks him in face again, for causing him to get a hole in his sock. Honda headbutts the one who attacked him earlier. He and Jonouchi proceed to beat-up the three hunters, while Yugi watches in surprise.

Jonouchi asks for his shoes back, but the guy with the broken nose says they do not have them. They had each been paid ¥3,000 by the store owner to steal the shoes. Yugi is disgusted by the store owner and changes into Dark Yugi.

Dark Yugi returns to the Junky Scorpion and confronts the owner. The owner tries to get rid of him, pointing out that the shop is closed. Dark Yugi tells him that he knows he paid the hunter to steal the shoes and he is taking them back now. The owner thinks he can't let Dark Yugi leave, knowing his secret. He starts to act innocent, claiming not to know what Dark Yugi means. He then picks up the shoes, acting surprised to find them there. With his back turned to Dark Yugi, he slips his scorpion into one and turns around handing it to Dark Yugi apologizing. 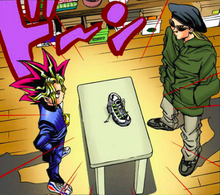 The Shadow Game, coin in sneaker

Dark Yugi reaches out his hand and the owner waits for him to stick it in and get stung. However Dark Yugi opens his hand and drops a number of coins into the shoe. He asks Dark Yugi why he did that and Dark Yugi says that they will play a game, just like the owner's test of courage, only this time there really is a scorpion in the shoe. With ten coins in the shoe, they will take turns pulling out coins, trying not to get stung, and whoever takes the most wins. The owner accepts, provided that Dark Yugi will give him 100,000 yen for each coin, if he wins. Dark Yugi agrees, stating that if he wins, all he wants are the shoes back. 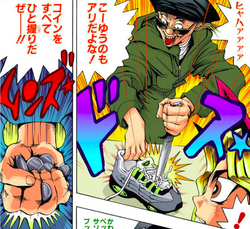 The store owner gets greedy.

Dark Yugi goes first. He pulls out one coin and breaths a sign of relief. The owner goes next, remarking that the scorpion has no respect for its owner, and also gets one coin. At this rate, the owner thinks he is getting nowhere and needs to find a way to get more than 1 coin at a time if he is to get some money from Dark Yugi. Dark Yugi goes again and takes out 1 coin. The owner smirks to himself that there is a way. As he starts his next turn, he questions Dark Yugi; as long as they put their hand in the shoe to grab coins, anything else goes? Dark Yugi replies that he is right. The owner reaches for a knife and stabs into the front of the shoe. He tells the scorpion that it is dead and grabs all the remaining coins.

The owner laughs that he has won and demands that Dark Yugi pay up. Dark Yugi points out that the game is not over; in his greed the owner took a fistful of coins and got his hand stuck. Dark Yugi asks if the scorpion is truly dead. The owner hears a shuffling sound inside the shoe. The scorpion, still alive, delivers a poisonous sting, causing the owner to let out a loud yell.

Dark Yugi remarks that in Shadow Games, those with weak hearts always lose; if the owner had any respect for the scorpion or the shoes, Dark Yugi could not have foretold how the game would have went.

Yugi, back to his normal self meets-up with Jonouchi and Honda later. He informs them that he had woken-up holding the shoes, while the store owner was being taken to the hospital for a scorpion sting. He does not know why, but there is a hole in the shoes. Jonouchi is happy that Yugi got the shoes back by himself and says he will consider the hole a battle scar. Honda on the other hand, still does not get why it is such a big deal.