"Messenger From Hell" is the seventy-fourth chapter of the Yu-Gi-Oh! manga. In its first English printing, it was numbered as the fifteenth chapter of Yu-Gi-Oh! Duelist. In the 3-in-1 edition, its number was changed to match the original Japanese printing.

Mokuba explains why he tried to take Dark Yugi's Star Chips and reveals more of Pegasus true intentions. Dark Yugi is later arranged to face the Ventriloquist of the Dead in a Duel.

Dark Yugi has just exposed the thief he was Dueling as Mokuba Kaiba. Jonouchi, Anzu, Honda and Bakura look in astonishment and wonder why Mokuba would try to steal Dark Yugi's Star Chips. Mokuba drops to the ground saying "no" and Dark Yugi wonders what he is doing on the island. 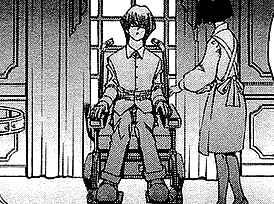 Jonouchi calls Mokuba a weasel and demands that he hand back the two of Yugi's Star Chips that he managed to grab, but Mokuba refuses. Anzu tries a calmer approach and asks if Mokuba is still mad at Yugi. Mokuba replies that he is of course, after what Dark Yugi did to Seto Kaiba, his brother. Anzu sees that Kaiba has not recovered and Mokuba explains that he is still under 24 hour care in the mansion and the world's greatest doctors have looked at him, but reported that he may spend the rest of his life in the coma.

Mokuba tells the others that he did not steal the Star Chips for revenge, despite what they may think. He says that they think they are smart, but they do not even know why Pegasus held the Duelist Kingdom tournament. He informs them that Pegasus needs to beat Yugi in order to take control of KaibaCorp. Dark Yugi is surprised to hear that Pegasus wants KaibaCorp. Jonouchi, Anzu and Honda can't make sense out of this and ask how beating Yugi will help him do that.

Pegasus meeting with The Big Five.

Mokuba explains that Pegasus established himself as a genius game designer when he created Duel Monsters, but his company, Industrial Illusions, was not big enough, so he teamed up with KaibaCorp to develop the Virtual Battle Simulation Box. Kaiba designed the Battle Simulation Boxes, but after he lost to Dark Yugi in Death-T, he fell into a coma and KaibaCorp's stock plummeted without his management. Pegasus took this as an opportunity to buy the company and made an offer with KaibaCorp's leading stock holders, The Big Five. With Kaiba gone, The Big Five possessed 60% of the company's shares and have all the decision making power. They liked Pegasus offer, but only accepted under the condition that Pegasus help rebuild their reputation. Since KaibaCorp had depended on the image of Kaiba being Japan's number one gamer, they lost the confidence of their investors after he lost to Yugi, so they wanted Pegasus to beat Yugi in an official Duel to regain that confidence. After doing that, Pegasus would be considered the chief executive.

Dark Yugi laughed that Pegasus really is looking forward to beating him. However Mokuba told him not to laugh; it is serious, he cannot beat Pegasus nor can anybody in the world. Kaiba had told Mokuba that Pegasus was unbeatable, so Mokuba thought if he could take Yugi's Star Chips and get him disqualified, he would not get to face Pegasus making his agreement with The Big Five void.

Dark Yugi asks if that is why Mokuba came to the island. However Mokuba replies that that is not the case; he was brought there by The Big Five because he has an important key. He tells them about how The Big Five came to his house one night to steal some documents from Kaiba's safe, so he swallowed the key to the safe in front of them. Anzu is slightly disturbed and asks "If the key's in your stomach...?" Mokuba laughs about how The Big Five would come running every time he went to the bathroom. He vows not to let them get control of KaibaCorp, even if they rip open his guts. 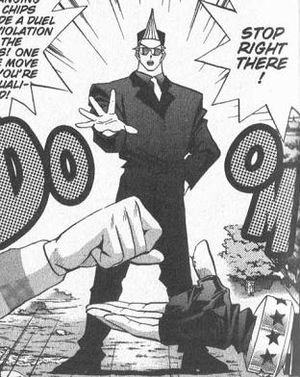 While he considers that Dark Yugi might not believe it, Mokuba explains that although Kaiba made Death-T to get revenge on the Yugis, his real dream was to build Kaiba Land amusement centers all around the world so that children can have fun. That is why Kaiba gave his life to KaibaCorp and that is why Mokuba will give his life to save KaibaCorp, he explains. Anzu tells Mokuba that she believes in him and politely asks if he can believe in the Yugis. She asks if he will return the Star Chips. Mokuba starts to consider it and Dark Yugi promises him that he will defeat Pegasus. Mokuba decides that he will trust Dark Yugi and begins to hand over the Star Chips. However Saruwatari appears and warns them that exchanging Star Chips outside of a Duel is a violation of the rules, punishable by disqualification.

Saruwatari is glad to have finally found Mokuba after being sent on a wild goose chase. He grabs Mokuba by the arm and confiscates his Star Chips. Jonouchi tells him to hold on; two of the Star Chips belong to Dark Yugi. However Saruwatari repeats that the only way to get Star Chips is by Dueling. In that case, Dark Yugi challenges Saruwatari to a Duel. He replies that he does not play games, but if Dark Yugi insists, he will arrange an opponent for him. He points to the Battle Box Dark Yugi and Mokuba had Dueled in, which is now occupied by someone. 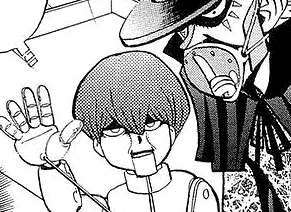 The Ventriloquist of the Dead and his puppet.

Kaiba appears to be in the Battle Box, but after looking closer, it becomes clear to them that it is just a puppet of Kaiba held by the Ventriloquist of the Dead. The ventriloquist tells Yugi that he will pay for what he did to him and begins repeating the word "revenge". Dark Yugi considers the ventriloquist to be scum for making fun of Kaiba, one of the greatest gamers he's ever met and says that he will not forgive him. Mokuba protests that the puppet is not really Kaiba; Kaiba is still in a coma, and tells Dark Yugi to beat the faker. Dark Yugi sits down and the puppet says "Today is the day... I k-k-kill you!". Dark Yugi's friends all urge him to beat the ventriloquist. Saruwatari thinks to himself that the ventriloquist is no ordinary Duelist invited to the island; he is the first of a group of assassins brought to the island by Industrial Illusions to kill Yugi. He thinks that the puppet will disturb and enrage Dark Yugi putting him off guard, leading to his defeat and when that happens KaibaCorp will belong to Pegasus.

Saruwatari looks at Mokuba and asks if he recognizes him. Mokuba then recognizes that he is Saruwatari, his bodyguard from KaibaCorp. A flashback shows him and another guard standing over Mokuba during Death-T. Saruwatari laughs that he is honored Mokuba remembers him and explains that back then he was a spy and had been reporting KaibaCorp's personal information to Pegasus. He says that that is not all he stole and tells Mokuba to just watch.

The ventriloquist gets the puppet to play his cards.

The ventriloquist has the puppet draw his next card and comment "The d-d-dragon of r-r-revenge has risen from Hell!!" and ask if Dark Yugi is ready. Much to Dark Yugi and Mokuba's surprise he Summons "Blue-Eyes White Dragon". Saruwatari grins and says that he also stole Kaiba's Deck.

Dark Yugi VS the Ventriloquist of the Dead[edit]

Continued in the next chapter...

The following cards appeared in this chapter.

In the Yu-Gi-Oh! anime, the end of the eighth episode, "Everything's Relative" and beginning of the ninth episode "Duel With a Ghoul" are based on this chapter. There are a number of differences including: