"The Evil Dragon Cards (Part 2)" is the forty-seventh chapter of the Yu-Gi-Oh! manga.

Dark Yugi faces Imori in another game of Dragon Cards. Dark Yugi plays to win back Yugi's soul, while Imori plays to take the Millennium Puzzle and become the Guardian of Darkness. 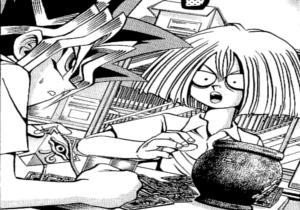 Dark Yugi has managed to take control of Yugi's body, since Yugi managed to touch the Millennium Puzzle as he lost his soul. Dark Yugi thinks that was close; had the puzzle not been snatched in time his soul would have been entombed in the shadows forever. Imori is surprised, but realizes that Yugi's soul is like two sides of a coin. He defeated the "front" Yugi, but just as he was about to become the guardian of darkness, he awakened the other Yugi.

Dark Yugi takes the puzzle back to himself and challenges Imori to another game of Dragon Cards. This time staking his own soul. Imori figures he can't become the guardian of darkness, unless he defeats this "back" Yugi, so he accepts the challenge.

Dark Yugi looks at the pot and wonders if he wins will he get Yugi's soul back. Imori laughs and asks if Dark Yugi is worried. The soul of Yugi's "front" self is in the soul-eating jar, Imori says, but there's nothing to worry about as it takes the jar three months to digest one soul. He smirks and says that if by some fluke Dark Yugi wins the next game, he will get his spare soul back good as new.

The game starts and each player draws six cards. Imori's Dragon Cards are

A section containing some of the rules is added for the reader. 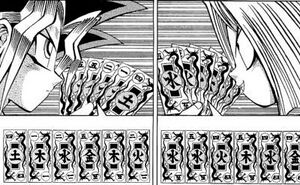 A couple of turns later, Imori now has:

He smiles and thinks he has three potential sets. He if draws another copy of any of those cards he'll have a complete set.

Dark Yugi on the other hand has:

He's only close to having one complete set, he thinks, it'll be some time before he completes his hand.

As the game continues, Imori thinks the discard pile has gotten big. Since he remembers all the cards Dark Yugi has discarded, he knows what elements Yugi is collecting and their levels. He suspects Yugi is trying to get a level 5 metal dragon and level 4 earth dragon. Imori draws another level 5 water and thinks Yugi's strategy isn't good enough; he now has a water dragon which can beat Yugi's metal dragon and will get a wood dragon to beat his earth dragon.

Yugi finally collects a third level 4 earth dragon and discards a level 5 dragon. Imori takes that card to Yugi's surprise. Imori explains that in this game you can make sets with cards that your opponent discards, making it dangerous to discard high level dragons this late in the game. 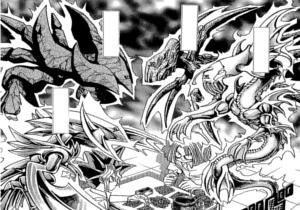 Yugi and Imori summon their dragons.

Information on Shui Long's special attack, "Flood" is show: It can freely control water to blast enemies and has the ability to rust metal.

Shui Long attacks Jin Long with its Flood attack, but Dark Yugi says he won't be caught out by the same trick twice. He prepares his earth dragon, Tu Long.

Information on Tu Long's special attack, "Ground Shatter" is show: It moves the earth by controlling the "dragon's breath" within the soil and can absorb the elements of water into its body. 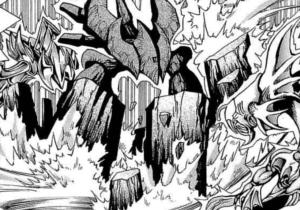 Yugi gets Tu Long to use its Ground Shatter attack. Tu Long raises the earth creating a dam to protect Jin Long.

Yugi explains that earth gives power to metal, so as long as Tu Long is there, Shui Long's water attacks won't work. Imori is slightly annoyed, but thinks that wasn't bad; Dark Yugi has apparently figured out the strategy of this game.

Imori begins his next turn. Since water strengthens wood, he uses Shui Long to leave water under the wood dragon, Mu Long. Mu Long absorbs the water and starts to grow. Mu Long launches an attack on Yugi's Tu Long. Wood is strong against earth and the Mu Long's shoots penetrated into Tu Long's body. Imori laughs similar to how trees take sustenance from earth, his wood dragon is sucking the power from Yugi's earth dragon.

Drained of its power, Tu Long was unable to move, so without it able to protect Jin Long, Imori got Shui Long to attack Jin Long again. The Flood attack hits Jin Long head on and Imori laughs that the metal dragon is dead and now Yugi is about to be.

However Jin Long remains standing. Imori realizes that the Flood attack wasn't as powerful, since Shui Long had given its power to Mu Long. The attack did do some damage as Jin Long's metal body started to rust.

Yugi asks Jin Long to give him the last of its power. Jin Long uses its axe wings to take flight and goes after the wood dragon, Mu Long. Knowing metal is strong against wood, Imori desperately tries to stop this and has Shui Long launch another water attack after Jin Long.

Using its Axe Wing Slash attack, Jin Long slices Mu Long into pieces, defeating it, but then gets hit by the flood and is beaten itself. Yugi thanks Jin Long for giving its life to save its comrade.

With Tu Long free again, it and Shui Long square off for one last battle. Shui Long uses its Flood attack and Tu Long uses Ground Shatter. The earth is raised and acts as a dam, blocking the attack. It also cracks up and Shui Long falls into a chasm. 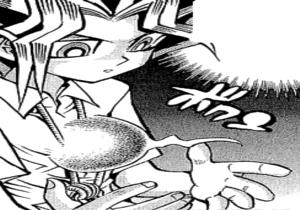 Imori is shocked that he lost. Yugi says that its now time for Imori's Penalty Game. Normally he tries to come up with something original, he says, but now its Imori's turn to feed his soul to twenty five ravenous dragons. Imori's soul comes out of his body in the form of a sphere and gets sucked into the soul-eating jar. (Called the Xing Zhen Hu in the Japanese version.) Since the jar can only hold one soul at a time, the regular Yugi's soul is freed and goes back into Yugi's body.

Imori sits soulless at the table, while Yugi reseals the cards, stating that Dragon Cards is a terrible game that brings disaster and this seal must never be broken again.

Episode 18 "In a Forbidden Game - Show Your Hand", of the Toei anime is based on this chapter and the previous one.