"One-Turn Kill", titled "One-Turn Deathmatch!!" (１ターンの死闘！！ Wan Tān no Shitō!!) in the Japanese version, is the 207th chapter of the Yu-Gi-Oh! manga. In its first English printing, it was numbered as the 148th chapter of Yu-Gi-Oh! Duelist. In the 3-in-1 edition, its number was changed to match the original Japanese printing.

Dark Yugi and Dark Bakura continue their Duel in the first round of the Battle City finals. With a special Spell Card, Bakura turns the Duel to his side, with one draw and one turn left before the Destiny Board finishes spelling its message.

Dark Bakura reminds Yugi that on the End Phase of his turn, the Ouija Board points to the letter "T". He comments that Yugi only has one turn left. On his next turn, all five letters of "DEATH" will be completed, and for him, the word will come true. Smiling, Dark Yugi apologizes, claiming that he's going to smash Bakura's Occult combo on this turn. Dark Bakura is shocked that Yugi claims that he can destroy his Occult combo in a single turn, and he wonders if it's a bluff, wondering how he could do so. The score stands with Yugi on 750 Life Points, and Bakura on 3700.

Dark Bakura thinks that Yugi has one face-down card on the field, but no monsters. He only has 750 Life Points left, so if a monster with higher ATK lands a solid blow on him, Dark Bakura will win. His "Earthbound Spirit" has 500 ATK, so he looks at his hand, seeing the 2000 ATK "The Earl of Demise." If that card's attack goes through, the game is his, the only problem being Yugi's face-down card. There's a chance he could fall into a trap. Marik suddenly contacts him, commenting that "Bakura" isn't so brave after all. Dark Bakura furiously retorts that he'll kill Marik for that, but Marik tells him to hear him out; Yugi figured out the weak point in Dark Bakura's Ouija Board combo. Marik knows what Yugi's face-down card is, but can Bakura guess? He admits that Bakura's Occult combo is an interesting concept, putting an Ouija Board on the field and defeating the enemy in five turns, calling it true ruthlessness, Marik admires him. But remember, the Ouija Board can only be activated under certain circumstances. "Dark Necrofear," who moves the planchette, must be buried in the Graveyard. In other words, if "Dark Necrofear" is brought back to life, the Ouija Board loses its powers. "Monster Reborn" Dark Bakura gasps. That's right, Marik comments. Yugi's face-down card is "Monster Reborn." And sure enough, that is exactly what's on Dark Yugi's field. Marik points out that even if Bakura attacks Yugi with a monster, he'll activate "Monster Reborn" defensively and use "Dark Necrofear" as a shield. Dark Bakura growls, knowing that he doesn't have "De-Spell" or any similar cards in his hand. Like Yugi said, his combo will be broken on this turn. Marik smirks, telling him to hold on, there may be a way around it. But Dark Bakura's had enough, telling Marik to shut up, claiming that he doesn't need his advice any more. He declares his turn, thinking that he'll just have to draw a card that will turn this situation around. He draws, and he looks at the card.

Then he bursts out laughing, thinking that it's over. Now his Occult combo can't be stopped. He sacrifices his "Earthbound Spirit" to Summon "The Earl of Demise." Dark Yugi thinks that here it comes, and Dark Bakura decides to step into Yugi's trap. He attacks Yugi with his "Earl," and the Fiend charges with its sword extended. Yugi immediately activates his Spell Card, "Monster Reborn," to bring back "Dark Necrofear" from the dead. "Dark Necrofear" emerges from the card, and Dark Bakura gasps, knowing that the Ouija Board will go back to the void. "Dark Necrofear" intercepts "The Earl of Demise," blasting the monster away with its "Pray for Death" Gaze, it's eyes widening. Bakura is reduced to 3500 Life Points, and Dark Yugi tells him that his combo's as dead as the corpses he plays with. But Dark Bakura simply laughs, playing a card and asking Yugi if he's sure.

The Ouija Board appears on his field, and Bakura confirms it, pointing out that the four letters are still there. Despite all his efforts, Yugi couldn't escape his death curse that will defeat him on the next turn. Though there is a change on his field, he points out. Dark Yugi realizes that "Dark Necrofear" is gone, and "Dark Magician Girl," "Gamma the Magnet Warrior," and "Kuriboh," are back (with all but "Gamma" looking very surprised.) Anzu asks in confusion if she missed something. Jonouchi points out that the monsters that got sacrificed or killed last turn are back on the field. Kaiba wonders in shock what Spell Card Bakura played. Dark Bakura asks if he should reveal the trick. The card he played was this, a Spell Card, "Deja Vu." Thanks to this card, the nightmare from a turn ago returned. But the "Monster Recovery," "Chain Destruction" and "Monster Reborn" cards that Yugi used to break the Occult combo do not return to his hand. He grins, claiming that there's no way to climb out of the grave he's dug for Yugi, on the next turn, he will die with the declaration of "DEATH." 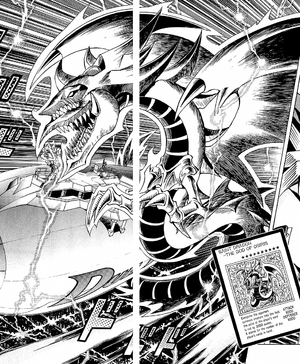 The advent of "Slifer the Sky Dragon."

Jonouchi, Honda, and Anzu (with "Namu" behind them) all cry out, as Jonouchi comments that it's right back to the worst possible situation. Growling, Dark Yugi states that it's his turn. He thinks that on the End Phase of this turn, all five letters of "DEATH" will be complete. He looks at his hand, which contains "Polymerization," "Card Destruction" and "De-Fusion," plus another card. Looking at his Deck, he knows that everything depends on the next card that he draws. Jonouchi tells him not to give up, though Dark Bakura thinks that whatever Yugi does, it doesn't matter. He wins. But Kaiba mentally urges Yugi to call God. Dark Yugi raises his hand to draw. Yugi tells him that he can do it. They have to win so they can regain his memory. He has to draw it. Yes, Dark Yugi replies. The card Yugi put in his Deck. He draws explosively, and lightning strikes from the heavens. Dark Bakura wonders, "what on earth" as he looks at the spectacle, as Dark Yugi, lightning flashing behind him, holds the card in the air. Dark Yugi declares "the advent of Slifer the Sky Dragon!" Dark Bakura looks up as the colossal red dragon appears above him, lightning still striking as it looms over the field.

Turn 15: Dark Bakura
Dark Bakura draws (later revealed as "Deja Vu") and then Tributes "Earthbound Spirit" to Summon "The Earl of Demise" in Attack Position (2000/700) and attacks Dark Yugi directly. Yugi activates his face-down Spell Card, "Monster Reborn" to Special Summon "Dark Necrofear" from the Graveyard in Attack Position (2200/2800). Because "Dark Necrofear" isn't in the Graveyard, "Destiny Board" and the spirit of the marionette's effects are negated. As Dark Yugi Summoned a monster, "The Earl of Demise" is forced to attack "Dark Necrofear" resulting in it destroying itself (Bakura: 3500). Bakura activates "Deja Vu" which returns all monsters on the field to their previous locations in the last turn. After that, each player must Special Summon all of their Monster Cards that were present on their side of the field during the previous turn from their Hand, Deck and/or Graveyard. As a result, "Dark Necrofear" returns to the Graveyard so the "Destiny Board" effects are applied again, also "Dark Magician Girl," "Kuriboh," and "Gamma the Magnet Warrior" have returned from the Deck and Graveyard to Dark Yugi's Field.

This Chapter was redone in the start of episode 84 of the anime. a number of changed were made include: