"Death to the Undead!", known as "Immortal Death?!" in the Japanese version, is the ninety-first chapter of the Yu-Gi-Oh! manga. In its first English printing, it was numbered as the thirty-second chapter of Yu-Gi-Oh! Duelist. In the 3-in-1 edition, its number was changed to match the original Japanese printing.

Readers got to send in suggestions for which card Jonouchi would use to win the Duel in this chapter.

Dark Yugi runs in Jonouchi's direction, hoping that Jonouchi does not give up, as he thinks that there is always a chance to win. Honda asks Dark Yugi if he knows where Jonouchi is. He replies that he does not know exactly, but he had a vision, where he saw Jonouchi underground. He leads the group to a cave, which they suspect Jonouchi must be inside.

Meanwhile in the Duel, Kozuka's "Dragon Zombie", now with 2720 ATK, attacks and destroys Jonouchi's "Glassman". Jonouchi wonders if this is the end. He thinks that there must be a way to win, but he cannot figure out what it is. He Summons "Tiger Axe" in Defense Mode.

Kozuka remarks that it looks bad for Jonouchi and every turn he defends, the Zombies will get more powerful, until Jonouchi runs out of cards. Jonouchi thinks that Kozuka is right; none of the cards in his hand can defeat the Zombies, he does not know if there is anything in his Deck that can, so all he can do for now is keep defending, while the Zombies get stronger. Keith wonders how long Jonouchi can postpone the inevitable. He put a "Stop Defense" in Kozuka's Deck and once that is drawn, the ultimate combo will be complete and Jonouchi will lose.

Kozuka begins his turn and announces that he has just drawn "Stop Defense". He sets it on the field, ready to be activated next time Jonouchi plays a monster in Defense Mode. "Pumpking the King of Ghosts" powers his Zombies up even further and "Dragon Zombie", now at 2880 ATK, destroys "Tiger Axe". 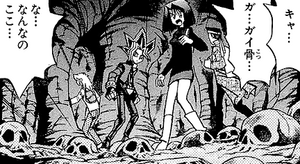 Anzu finds skulls in the cave.

Elsewhere in the cave, Dark Yugi, Anzu, Honda and Bakura continue their search for Jonouchi. Anzu notices that there are skulls on the ground, after she nearly trips over one. Honda concludes that this is bad; Jonouchi will not be okay if he is Dueling in a place like this and could be fighting cannibal cavemen. Dark Yugi hopes that Jonouchi remembers their promise; that they came to the kingdom to save Sugoroku and Shizuka. At the Duel, Jonouchi seems to have heard what Dark Yugi was thinking. He vows not to give up and draws his card, saying he has to protect something important to him and vowing to win by himself. 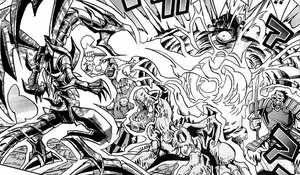 Jonouchi draws and Summons "Red-Eyes Black Dragon". Keith is surprised to see that he has such a rare card. Jonouchi declares that having come this far, he cannot run away. If he cannot use his cards to defend, he vows to go out in a blaze of glory. "Red-Eyes" uses its "Black Fire Bullet" attack to destroy "Pumpking the King of Ghosts", dropping Kozuka's Life Points to 900. Since "Pumpking" was undead to begin with, Kozuka was unable to revive it with "Call of the Haunted".

Without "Pumpking", Jonouchi points out that the Zombies cannot get any stronger. However, Kozuka says that it does not matter, since the zombies are already strong enough to defeat Jonouchi. "Dragon Zombie" attacks and destroys "Red-Eyes", leaving Jonouchi with just 150 Life Points.

Jonouchi wonders what he can do now. All he has in his hand are "Kung Fu Fighter Ultimator", "Kunai with Chain" and "Salamandra". The only monster he can play is "Kung Fu Fighter Ultimator", but its ATK is too low, even if he uses it in conjunction with the others. Keith urges Jonouchi to hurry up and draw and then says "Play a card and die, loser!". This reminds Jonouchi of Kaiba calling him the same thing. He gets mad at Keith for calling him that and draws his next card, thinking he is not a loser. 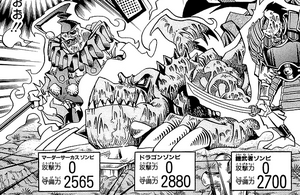 The Zombies, with their ATK and DEF switched

Jonouchi draws "Shield and Sword", a Spell Card that switches the ATK and DEF of monsters on the field. He notes how Kozuka's monsters have a high ATK and decides to gamble that switching it with their DEF might help. He Summons "Kung Fu Fighter Ultimator" and activates "Shield and Sword" for what he calls his big finale. Keith and Kozuka are both surprised by the move and look down at the zombies, whose ATK have each become 0, while their DEF are equal to their respective old ATK values. Keith realizes that the zombies have little brain power; they can instinctively attack, but cannot defend themselves. "Shield and Sword" also affected "Kung Fu Fighter Ultimator", whose ATK becomes 1000. Using its "Ultimate Screw Knuckle" attack, it destroys "Dragon Zombie" and drops Kozuka's Life Points to 0.

Keith calls Kozuka a moron for losing, while Jonouchi sighs and wonders if he really just won. Dark Yugi and the others then arrive. Honda notices that Jonouchi looks spaced out and asks if that means he lost. Jonouchi is surprised to see his friends. He informs them that he won, although he credits a lot of it to luck. Anzu congratulates him and he and Dark Yugi give each other a thumbs up.