"Millennium Enemy 9: The White Wizard Bakura" is the fifty-eight chapter of the Yu-Gi-Oh! manga.

The adventurers, joined by the white wizard Bakura battle Zorc, who changes into his final form, Last Zorc.

Thanks to the white wizard Bakura weakening Zorc's defenses, the gunman Honda was able to shoot a hole in Zorc's side, dropping his HP to 81. Since the adventurers saved Bakura from the darkness of Zorc's heart, he says that this was the least he could do and asks to fight alongside the adventurers.

Since Bakura's consciousness was buried deep inside him, Dark Bakura wonders how Bakura was able to create a non-player character and how he could thwart him this much. With Zorc's defenses down and his HP dropping, Dark Bakura thinks he'll have to use his last resort.

Dark Yugi thinks that the game has reached its final stage, but he is sure the Dark Master still has some tricks up his sleeve, which means they'll die if they let their guard down. 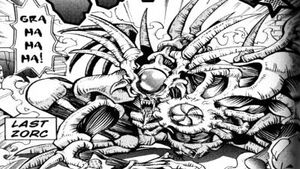 Zorc in his Last Zorc form.

As the adventurers and Zorc enter their last stand, Zorc starts to change shape and transforms into his final form, Last Zorc. In this form, Zorc's attack and defense both Level up.

Last Zorc prepares to make his attack. Dark Yugi realizes that he is concentrating all his energy, but cannot see a way for the adventurers to survive. Bakura tells everyone to look out, but with not enough time for them to do anything, he realizes he must raise their defenses. Dark Bakura rolls the dice and gets a Super Critical, 00. 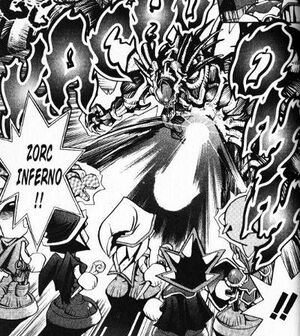 A hole in Last Zorc's chest opens, revealing an eye, which launches the "Zorc Inferno" attack. Bakura jumps up and uses his white magic, "Shining Shield Level 13", creating a forcefield in front of the adventurers. Dark Bakura sees that the shield will not hold out much longer against Last Zorc's flames. Bakura starts to run out of magic energy, but converts his Hit Points to Magic Points, in order to maintain the shield.

The attack stops and Honda, Anzu, Yugi, Jonouchi and Bakura are left with 1, 3, 2, 1 and 1 HP respectively. Bakura falls to his knees. Yugi says that Bakura risked his life to save them and Anzu offers to heal him on her next turn. However Bakura insists that he is alright and if Anzu has any Magic Points left, she is to use them to attack Zorc. He doesn't have enough energy to protect everyone again, so Bakura says that they if they don't win this turn they will be destroyed. 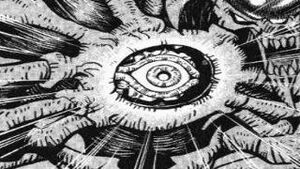 Dark Bakura is angry to see that they survived Zorc Inferno and worries because Last Zorc's weak point is exposed after he attacks. Yugi wonders why Zorc didn't transform into Last Zorc sooner if it raises his attack and defense. Dark Yugi mentally tells him that it's because this is Zorc's final gamble; They pushed him to a point where he had no choice but to change into a form with raises attack and defense at the cost of exposing a weak point.

Dark Yugi points to the eye on Zorc's chest and identifies it as the weak point. However the hole around it begins to close quick enough to prevent the adventurers from striking it. Dark Bakura thinks it is too late for them to do anything. He admits he was worried when they discovered Zorc's Achilles' heel, but if the opening closes he has nothing to fear. 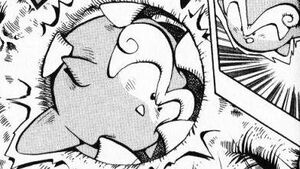 Pokii inside the hole.

Suddenly Pokii flies forward and lodges itself into the hole, preventing it from closing. It tells the adventures to attack itself and Last Zorc. It thanks the adventurers for making it their friend and says goodbye. Jonouchi thanks Pokii, but says that it is not too late; The adventurers refuse to sacrifice a friend they fought alongside, believing an evil soul is not worth an ounce of a friend's life. Pokii is moved, but regardless thinks it is impossible for them to save it. 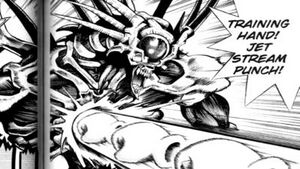 Yugi, the beast tamer, moves next and vows to save Pokii. Dark Yugi rolls a Critical 02 and Yugi uses his "Jet stream punch" attack. The training hand forms a fist and punches through Last Zorc's weak point, grabbing Pokii in the process.

The adventurers celebrate beating Zorc, but Dark Yugi says it is not over yet, as Last Zorc's upper half balances itself up, still alive. Dark Bakura laughs that it is not over yet and comments that not defeating Zorc that turn shall be their downfall. He explains that they must roll for initiative of the next turn; whoever rolls higher goes first. Dark Bakura plans to have Last Zorc self-destruct and take the adventurers with him. Dark Yugi agrees to take Dark Bakura on. Seeing this roll means life or death Dark Yugi vows to put everything he has in these dice.