"Into the Fire", known as "Hot Life-or-Death Match" in the Japanese version, is the sixth chapter of the Yu-Gi-Oh! manga.

Goro Inogashira takes over Yugi's class' spot at the school festival, where they were making Carnival Games.

One panel in this chapter contains a puzzle for the reader, asking where Yugi is in the picture. The answer, given later in the chapter, is that he is under the "school festival" sign that is being hung.

Class B, hold a meeting to decide what to do for the school festival. The class representative, Anzu asks the class for suggestions. A couple of hands raise up. One student suggests a haunted house, but Anzu says that it is no good, as class C is already doing that. Another suggests that they make yakisoba. Jonouchi stands up proud to give his idea. Since the festival is about entertainment, he says that they must show some guts to steal the audience from the other classes, so he suggests they use sex appeal and set up a cabaret, with the girls wearing costumes to appeal to every guy's fantasy. The girls in the class quickly fire random objects at Jonouchi, telling him to stop.

Anzu takes a few more suggestions from other students, including Hanasaki, who suggests a comedy manga dojo (gag manga in the English version). The rest of the class all look at Hanasaki strangely and he bows his head in embarrassment.

The class start to discuss what games to do and decide on a life size version of Bluebeard's Attack, a bottle toss and a shooting gallery, using Honda's air rifle. The estimated costs amount to 50,000 yen (about $410 US at the time), which is exactly their budget.

Anzu managed to get the most popular spot for their booth in the placement lottery. 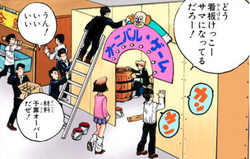 The Carnival Games booth being built.

With three days until the festival, the class begin work on the booth. Yugi makes a Bluebeard mask from papier-mâché, while Jonouchi works on its barrel. Yugi complements Jonouchi on his construction skills, which Jonouchi owes it to making plastic models and garage kits. Jonouchi opens up the barrel and gets inside to demonstrate. He rubs his hands together and sniggers as he wonders who will be the pirate. To his disgust, Anzu suggests that Jonouchi be the pirate, as he's the perfect size and Yugi holds up the head, saying he made it to fit Jonouchi. 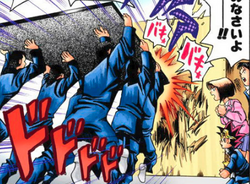 Goro Inogashira, from senior class D and a couple of his classmates show up with a massive grill. He sees the Carnival Games and remarks that there seems to someone in their spot. He asks Anzu what they are doing and tells them that this space belongs to senior class D. Anzu protests that her class won it in the lottery. Inogashira laughs and tells Anzu's class that his class makes okonomiyaki there every year and orders them to take their Carnival Games and beat it.

Jonouchi starts to climb out of the barrel, asking Inogashira who he is and saying that he is the one who is going to beat it. However Jonouchi gets stuck in the barrel and Inogashira wallops him in the face. Inogashira orders his class to use their grill as a battering ram to tear down the Carnival Games booth. Yugi runs out in front of them, in an attempt to stop them, but is knocked down and left unconscious.

Inogashira's class leaves the grill in the stand, while class B are left helpless.

Yugi wakes up in the infirmary, with Anzu by his bedside. Yugi asks about the Carnival Games, but Anzu suggests that they try again next year. Yugi says that they have to get the space back. Anzu agrees that they should, but does not think that they can. Yugi notices Anzu weeping and the Millennium Puzzle lights-up; this injustice cannot stand, the one who has trespassed on the souls of Yugi's entire class must be punished. Anzu turns to face Yugi's bed, but finds Yugi is gone, while the window is left wide open.

Dark Yugi arranges for him to Inogashira to meet-up at the stand. Here Dark Yugi tells Inogashira that he has trespassed on the souls of every member of his class and for that he must play a game with him. Inogashira smirks that Yugi is the kid who was whining earlier and asks if he should be playing his games with his mommy. Dark Yugi smiles and says that if Inogashira has any guts, he will play this Shadow Game with him.

Although Inogashira finds it below him to play games with a kid like Yugi, he has never backed down from a challenge and he has always won. He asks what kind of game Dark Yugi is talking about. Dark Yugi shows him the grill, which is now piping hot and lined with a small wall of bricks along the edges, with a gap in front of either player. Dark Yugi then shows him a block of ice, with a test tube of explosive chemicals inside. In this game, which Dark Yugi calls Griddle Ice Hockey, they use the block of ice as a puck and hit it towards each other using spatulas. Should the explosive hit the hot grill, one or both players will be blown "sky high". The loser gives up the right to the space at the festival. Inogashira accepts the challenge. 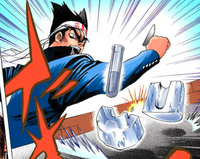 Inogashira deals powerful blows to the puck, making it difficult for Yugi to keep up. Dark Yugi realizes that if they keep playing at this rate, he is going to lose, so he hits the puck with the edge of the spatula, causing it to crack. Inogashira gives the puck a massive blow, causing it to break. The test tube hits the grill and blows up in Inogashira's face.

Yugi says he will take the space back as promised. As he leaves, he says that those who trespass in other's souls will always get burned in the end.