"The Magic of the Maze!" is the ninety-fourth chapter of the Yu-Gi-Oh! manga. In its first English printing, it was numbered as the thirty-fifth chapter of Yu-Gi-Oh! Duelist. In the 3-in-1 edition, its number was changed to match the original Japanese printing.

With the "Wall Shadow" destroyed, the Meikyû Brothers use "Magical Labyrinth" to isolate Jonouchi from Dark Yugi.

Using "Kunai with Chain", Jonouchi has just helped Dark Yugi's "Celtic Guardian" (printed as "Celtic Swordsman" in this chapter) defeat Meikyû the Elder's "Wall Shadow". Anzu, Honda and Bakura all compliment Jonouchi on his move and Honda realizes that Jonouchi really is getting to be very good at Duel Monsters.

Jonouchi begins his turn. With "Axe Raider" as his only monster, he feels that he needs to play more in order to support Dark Yugi. Jonouchi Summons "Flame Swordsman" and moves it and "Axe Raider" closer to "Celtic Guardian". "Kunai with Chain" still remains equipped to "Axe Raider", increasing its ATK by 500. 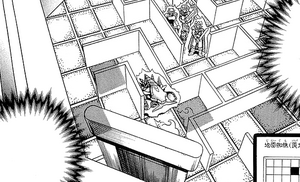 The squares chosen for the effect of "Jirai Gumo"

Dark Yugi starts his turn and is certain the brothers have traps hidden along the route. Jonouchi wishes that they could jump over the maze walls to get to the doors sooner. However Dark Yugi explains that flying monsters will not work in the labyrinth. Although the players cannot fully see it, the game is set in a dungeon, with a ceiling, leaving no room to fly. This worries Jonouchi, since his "Red-Eyes Black Dragon" is a flying monster. Dark Yugi confirms that "Red-Eyes" cannot be used and says that for now they will have to move forward, one step at a time, but thinks to himself that there is another way. He Summons "Dark Magician" and moves it in front of "Celtic Guardian", "Flame Swordsman" and "Axe Raider". He feels that their marching order is now very tight, with no openings for the brothers to mount a sneak attack. 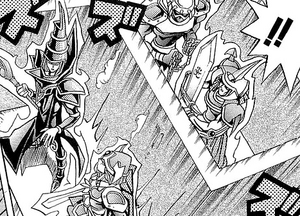 Meikyû the Elder gathers that his opponents are planning on moving through the dungeon by force of numbers, but he plans on putting an end to their teamwork. He activates "Magical Labyrinth", causing the walls of the maze to be rearranged, separating Dark Yugi's monsters from Jonouchi's. Meikyû the Elder laughs that their monsters can no longer help each other and thinks that it is now time to get down to the "real business" of a Tag Team battle, picking on the weaker partner, Jonouchi. 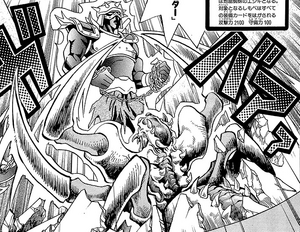 "Axe Raider" steps of one of the squares for "Jirai Gumo".

Jonouchi notes that he would have to take too much of a detour to reunite his monsters with Dark Yugi's. He decides that he had better leave Dark Yugi alone and make his way through the labyrinth by himself. He moves "Axe Raider" forward, but ends up stepping on one of the squares selected for "Jirai Gumo", causing the spider to emerge and battle him. Being caught off guard, "Axe Raider" cannot use weapons in self-defense, so it does not get the benefit of "Kunai with Chain". "Axe Raider" is destroyed and Jonouchi's Life Points, drop to 1700. 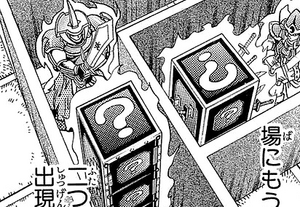 "Dark Magician" and "Jirai Gumo" inside the "Mystic Boxes"

Dark Yugi begins his turn and Meikyû the Younger says that it is too bad for him, since he can only sit there, while his friend dies at the other side of the wall. Dark Yugi smiles and asks him if he thinks so. He then activates "Mystic Box", causing a box to encapsulate "Dark Magician", before being pierced with several swords. Meikyû the Younger wonders if the Dark Magician just killed himself, but his brother points out that another box had appeared around "Jirai Gumo". The first box then opens, revealing "Jirai Gumo" and "Dark Magician" had switched places, causing "Jirai Gumo" to be killed by the swords. "Dark Magician" emerges from the other box and destroys "Labyrinth Tank" with its "Black Magic" attack. Dark Yugi apologizes for wrecking their plan and affirms that the power of teamwork will overcome any wall.