"The Other Criminal" is the fifteenth chapter of the Yu-Gi-Oh! manga.

Shadi prepares to kill Professor Yoshimori for defiling the territory of the Gods. After entering his soul room, Shadi finds Yoshimori is waiting for Yugi to visit, so he decides to postpone killing Yoshimori and use him to lure Dark Yugi into a Shadow Game.

Inside his room, Yugi thinks about what Shadi said about there being another Yugi, the secret of the Millennium Puzzle and going to put another man who defiled the territory of the Gods on trial. His head starts to spin, so he decides to put those thoughts aside, but his grandfather, Sugoroku quickly calls him to see something terrible on the news.

On the news, Yugi sees that Curator Kanekura had been found dead after a heart attack, induced by shock. But since there were no reasons for this to be a natural death, people were wondering if this could be the curse of the pharaoh's tomb.

Yugi asks Sugoroku if there is such thing as curses. Sugoroku is unsure, but tells him how there was similar hype in 1923 when Tutankhamun's tomb was opened; some of the discovers died mysterious deaths, but nowadays it is accepted that the "mummy's curse" was a sensation created by the media. However, the existence of curse is not what is bothering Sugoroku. He reminds Yugi that there was another man involved in the excavation, Professor Yoshimori. This reminds Yugi of what Shadi said about "another man". Although it is unlikely that Yoshimori believes in curses, the death of a colleague must be hard for him, so Sugoroku plans on visiting him at the university. Yugi asks if he can come too. He doubts Yoshimori is the man Shadi meant, but he feels something deep in his heart telling him that he must go see Yoshimori.

After they leave the shop, Yugi and Sugoroku bump into Anzu and Jonouchi, who have just heard the news of Kanekura's death. They had been coming to meet Yugi and Sugoroku so they could all go to see Yoshimori together. Jonouchi says that he is certain there is a curse. Yugi tells Anzu and Jonouchi that he has got the feeling that they should not come. Anzu insists that they are fine and Jonouchi says that he is not really afraid of the curse, plus Yoshimori showed them around the museum and they are worried about him too. Yugi agrees and apologizes for acting strange.

Shadi watching Yoshimori and Kanekura at the excavation.

Inside the archaeology lab, Yoshimori is sitting at his desk worried, as he tries to convince himself that there's no such thing as a curse. A flashback is shown of Yoshimori finding the tomb. Behind him shaking Kanekura's hand, Shadi was peering at them in the background. He hears a noise, but suspects he's hearing things. He goes back to waiting for Sugoroku and Yugi, as he's never needed a friend as much as he does today. 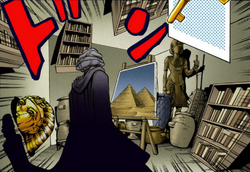 Shadi secretly comes up behind Yoshimori, thinking to himself that this man is a criminal who defiled the territory of the Gods and profaned the valley of the kings. By Anubis' will, Shadi thinks he shall put this man on trial, but before that he shall uses the Millennium Key to unlock Yoshimori's soul room and see if he can find a shred of guilt.

Inside the room, Shadi finds artifacts and loads of bookshelves filled with books on archaeology. Shadi remarks that his heart is cluttered with obsessions from the past. In one corner, he finds a picture of Yoshimori's family covered in dust. Yoshimori regrets neglecting them for his obsession with work. The darkness of the room is proof to Shadi that Yoshimori is feeling anxiety and fear and suspects the death of Kanekura is the cause. In the darkness, Shadi finds a glimmer of light, representing some hope. The hope comes from Yoshimori waiting for his friends. Shadi looks at who it is he's waiting for and is surprised to see Yugi among them. Before killing Yoshimori, Shadi thinks he should be able to use him to draw out Yugi's hidden power. He performs a "Marionette design", redecorating the room, turning Yoshimori into his puppet. Shadi laughs that the second stage of his game with the Yugi within Yugi has now begun. 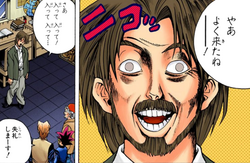 Sugoroku, Yugi, Jonouchi and Anzu arrive at the university. They see themselves in. Jonouchi says that he hates schools at night, as they're so creepy. Anzu reprehends him for having no courage. Outside Yoshimori's room, Jonouchi acts creeped out, as he looks at a skull figure. Anzu scolds him again, saying looking like that is going to depress the professor more. The group put on happy faces and enter the room. 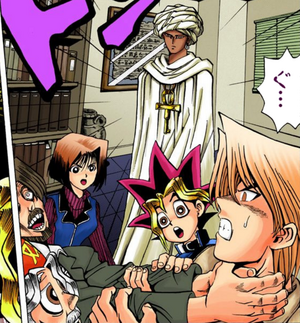 They apologize for being late and the professor, now possessed by Shadi welcomes them in. He says he's been waiting for them and titters. Jonouchi and Yugi agree that he seems happy. Jonouchi holds out a bag of refreshments, saying that they brought him something to thank him for showing them around the museum. Anzu scolds Jonouchi once more, as mentioning the museum may upset Yoshimori. Yoshimori replies, "oh yes. Oh yes... the museum... Somebody killed him... Somebody killed Mr. Kanekura!" and titters. Everyone looks at him astonished. Jonouchi suspects something weird is going on and Sugoroku asks Yoshimori if he's okay. Yoshimori replies that nothing is wrong, he was just waiting for Yugi.

Yoshimori runs towards the group and seizes Jonouchi by the neck. As he strangles Jonouchi, he turns to Yugi and says that he wants to see the other Yugi. Everyone grabs onto the professor and tries to pull him off of Jonouchi, but he maintains a firm grip on Jonouchi's neck. Shadi then appears in the room, but due to the commotion, Yugi is the only one who notices him. He asks to please excuse his puppet's rudeness. Yugi wonders if Shadi is responsible and asks him what he did to the professor. Shadi says that if his theory is correct, this will bring out the other Yugi.

Episode 6 of the Toei anime, "Desperate Situation!! Burning Friendship Battle", is based on Duels 15 to 20 of the manga.

The differences in contained from this chapter were: