"Jail Break!" is the fourth chapter of the Yu-Gi-Oh! manga.

Katsuya Jonouchi and Yugi Mutou notice Anzu Mazaki has been behaving strange lately. Investigation causes them to meet up with an escaped convict.

The prisoner numbered 777 escapes Domino City Jail, shooting a guard in the process. He then dashes towards Domino City.

As school ends, Jonouchi suggests to Yugi, that they grab something to eat on the way home. Yugi excitedly suggests the new Burger World, which had just opened. Jonouchi, punches the air, yelling out "Awright! Burger World it is!". Anzu overhears them and quickly shuns the place, telling Yugi the place is terrible, people started getting sick the day it opened, he absolutely cannot go there. A bit disappointed, Yugi relinquishes the idea, taking Anzu's advice and suggests they go to Calorie Burger instead. Anzu says that she can't join them, she has chores to do and reminds them what the teacher said about an escaped convict on the loose, so they should probably go straight home. Yugi gets worked up over the convict. Anzu leaves while he quibbles with Jonouchi and takes a big sigh of relief after leaving the classroom.

Jonouchi ponders and says that Anzu has been acting strange lately. Yugi agrees noting that she hasn't walked home with them recently. Jonouchi thinks, if his instincts are correct, she's doing an "escort service", explaining that to be where a girl takes rich older men on dates to earn money. (In the Japanese version, Jonouchi thinks the she has been going on enjo kōsai.) Yugi immediately objects that Anzu is not that kind of girl. Jonouchi begins to tease Yugi about jumping to her defense and his face going red.

The two of them follow Anzu in secret after she leaves school. They trail her until she enters a building. The two boys stare at the building puzzled, seeing that it's Burger World. 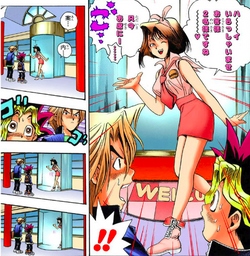 Anzu meets Yugi and Jonouchi at the door.

As they enter Anzu, in a waitress uniform, meets them at the door and begins to welcome them, before noticing, who they are. She begins to panic. After-school jobs are against school rules. If people begin to find out that she has one, she'll get expelled. Nonetheless she takes them to their seats and serves them. After putting their burgers in front of them, Anzu squirts ketchup onto them producing the text "TELL AND YOU DIE!!".

Jonouchi tells her to relax. Now that they know she works here, Anzu explains that she plans earning money to go to America after she graduates. There she wants to study dance in New York. They assure her that they won't laugh or tell. Jonouchi then grumbles about having to pay for burgers drowned in ketchup, but Anzu says that they're on her.

Meanwhile the convict approaches the restaurant in need of a drink and cigarettes.

As the convict enters the restaurant, he is greeted by Anzu at the door. He then seizes her, holding one hand over her mouth and pointing his gun to her head. He yells that if anyone makes a sound, she dies. He blindfolds Anzu and sits the two of them down, keeping her at gunpoint. He looks around to pick someone to serve him. He points the gun at Yugi, saying "You! The wussy little one!". He demands everyone else get on the floor and close their eyes. Then he sends Yugi to get him a drink and a smoke. Anzu recognizes "That wussy little one" to be Yugi. She tells him to stay back, but gets slapped for doing so. Upset by having one of his friends attacked, Dark Yugi comes out. 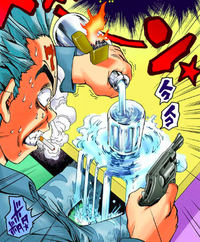 Yugi brings out the vodka and a packet of Lucky Stripe cigarettes and plops himself into the seat across from the convict. The convict gets enraged at his nerve, bellowing back at him "Who said you could sit down?" Yugi replies that he thought he'd help him pass the time and suggests they play a game, if he has the guts. The convict is surprised, by Yugi's sudden change in attitude, wondering if this could be the same guy. Anzu is also surprised. It sounds like Yugi to her, but is too confident to be him. Whoever it is, she thinks, is crazy to talk to someone with a gun like that. 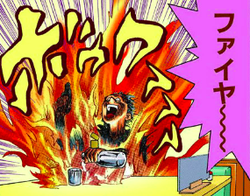 The convict accepts, and the rules of the game, one finger BATTLE!, are that each player must choose one finger, and can only move that one. Other than that, the players are free to do whatever they want. As Dark Yugi explains the rules, the convict puts a cigarette in his mouth and begins pouring the vodka into a glass. The convict chooses his index finger and Dark Yugi uses chooses his thumb. The convict is about to shoot Dark Yugi, until Dark Yugi flicks on a cigarette lighter with his thumb. The convict realizes that he didn't light his cigarette yet and orders Dark Yugi to light it for him. Dark Yugi places the lighter on the prisoner's arm. The prisoner now can't move because if the lighter hits the 90% alcohol (180 proof) Russian vodka, his body will be burn. Dark Yugi grabs Anzu and starts to walk away. The prisoner starts to say something, but the cigarette falls into the drink.

Dark Yugi escorts Anzu away and changes back to regular Yugi, just before Anzu takes off her blindfold. Yugi, oblivious to the game that just occurred, is glad to see Anzu okay. Jonouchi and Yugi, rush to each other. Jonouchi also didn't see the game and only knows the prisoner set himself on fire. While they reunite Anzu looks around for her savior. She puts on her hands on her chest, thinking to herself, that she'll never forget that voice, after all she's fallen in love with its owner.

This event happened in episode 2 of the Toei anime, "The Evil Gamer - The Trap of Hell". There were a number of differences in this version including.

In the anime, this event is mentioned in a flashback, but there is no mention of the convict.