"Endgame!!", known as "End of the Deathmatch!!" in the Japanese version, is the thirty-ninth chapter of the Yu-Gi-Oh! manga.

With his life depending on what he gets, Dark Yugi prepares to draw his final card in his Duel against Kaiba. His only hope is to get the final piece of "Exodia", but he starts to doubt he can get it.

Kaiba now has three "Blue-Eyes White Dragons" and the effect of Yugi's "Swords of Revealing Light" has worn off, allowing him to attack with all three of them. The audience start to celebrate, believing that Kaiba has won. 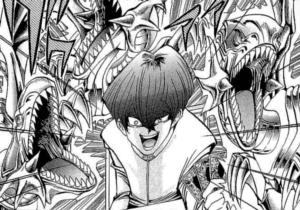 Kaiba laughs and reminds Yugi that it is his turn and prompts him to draw the "last card of [his] life" - on his next turn his three "Blue-Eyes White Dragons" will attack together and end Yugi's life.

Sweat pours down Yugi's face as he looks at his Deck and looks at his hand. He has four pieces of the Forbidden One: the legs and the arms. Assuming that these are the cards Grandpa told him about which Summon "Exodia", he just needs 1 more card - however, he doubts he can do this. He wonders what the odds of getting the five cards from a Deck of forty into his hand, and wonders if he is going to lose. From the audience, Jonouchi and Anzu try urging Yugi not to give up.

Kaiba continues to hurry Yugi into drawing his card, believing all he's doing is delaying the inevitable - no matter what Yugi draws, he claims it can't stand against the might of three "Blue-Eyes White Dragons". As Yugi reaches for his Deck, Kaiba thinks: "That's it! Draw the card and you can rest in peace! Rest for eternity in the blackness of death!" 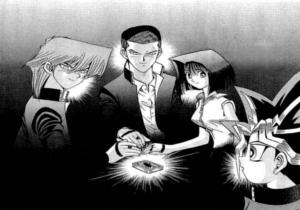 Yugi finds that he can't reach the Deck - although he should be able to reach the cards, they seem so far away all of a sudden. However, he realizes that it's not the cards, it's him - he's trying to escape facing his fate, with his fear extending the distance as he looks at the dragons. Yugi looks at the Deck again and suddenly sees his friends' hands appear over it, with the symbol of friendship that Anzu drew on their hands earlier becoming visible. Yugi remembers what she said earlier: "If they are ever alone, they just have to think of the smiley face." As he does, he sees Jonouchi, Honda and Anzu around the cards. They tell him that they are here for him, and Yugi puts his hand over the Deck, completing the face.

Believing that his friends are with him, Yugi confidently grasps the Deck and picks up the next card, thanking his friends and saying the he won't be afraid anymore. Kaiba is surprised by Yugi's sudden change in attitude - one moment, his face was twisted in fear, and the next he's smiling. Kaiba wonders if Yugi has gone past fear and accepted that he's going to die; Yugi notices Kaiba's confusion and informs him that it is hope he is seeing. 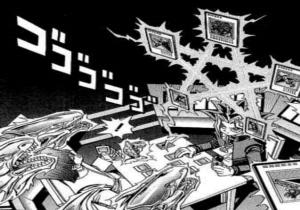 Yugi looks at the card and shows it to Kaiba, declaring that his next card is "Exodia the Forbidden One", leaving Kaiba stunned as Yugi shows him all five cards. As the cards appear in front of Yugi and form a pentagram connecting them, Kaiba is shocked that the "Exodia" cards really do exist and wonders where Yugi got them from. Before long, the gigantic "Exodia" emerges from the hexagram as Kaiba stares up in terror. 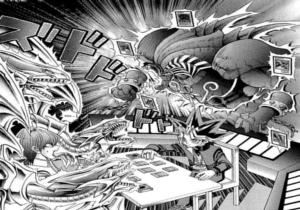 With infinite ATK, "Exodia" strikes the decisive blow: "Rage Inferno! Exodia Flame!" Its attack destroys all of Kaiba's "Blue-Eyes" and drops his Life Points to 0.

As Kaiba stutters at his defeat, Yugi says that the "Blue-Eyes White Dragons" were powerful, but weak cards can sometimes join together and when they are together they can create an infinite power which can defeat any enemy. Yugi then declares the duel over - he wins.

This chapter was redone during episode 24, "Now! The Time of Decision - The Miracle of Friendship" of the Toei anime.

This chapter was redone during episode 1, "The Heart of the Cards" of the anime.