"The Crumbling Darkness" is the 235th chapter of the Yu-Gi-Oh! manga. In its first English printing, it was numbered as the 176th chapter of Yu-Gi-Oh! Duelist. In the 3-in-1 edition, its number was changed to match the original Japanese printing.

Dark Marik faces off against Dark Bakura in a Shadow Game where the loser will be devoured by the darkness as they lose Life Points. Dark Marik is put at a disadvantage as he tries to draw his God card, despite Dark Bakura losing most of his Life Points.

Dark Marik chuckles, asking Dark Bakura if he's discussing strategies again. He tells them that it's futile, and urges them to hurry up. Marik finishes talking, and Dark Bakura snickers. He comments that the strategy brings out the best of Dark Bakura's Occult Deck as well, and laughs, telling Marik to rejoice; Dark Bakura will blast Marik's body apart using Marik's own advice. Marik immediately replies that he doesn't care, telling Dark Bakura to do it. Frustrated, Dark Marik wonders what Marik told Bakura.

Dark Bakura Sets two card face-down, and in addition he Summons one wall monster, "Gelnia", in Defense Position, ending his turn. That means it's Dark Marik's turn, and he draws. The "Ra" card isn't in his hand yet, so hedecides to make God come to him using a Spell Card, "Card of Sanctity". They both draw until they're holding six cards, but Dark Marik hasn't gotten "Ra." Dark Bakura bursts out laughing, asking if Dark Marik wants the God card that badly. Then he'll grant Dark Marik's wish, with this Spell Card. He plays his Set card, "Dark Designator", allowing him to add "Ra" to Dark Marik's hand. As Dark Marik removes the card from his Deck, he wonders in shock why Bakura is adding the card to his hand, then he remembers Dark Bakura's other face-down card, which Dark Bakura promptly activates - "Multiple Destruction". Both players are forced to discard their entire hands, then draw another five cards. Dark Marik realizes in horror that he'll have to send his entire hand to the Graveyard, including "Ra." Dark Bakura explains that "Ra's" ATK and DEF are determined by the total ATK and DEF of the three monsters used for its Summoning. That is its weak point. If God is Summoned sing "Monster Reborn,": without any sacrifices, its ATK will be zero. He yells that he doesn't have anything to be afraid of, as God is dead. Dark Marik knows that no Spell can affect a God for longer than one turn. Even if he brings it back out with "Monster Reborn", it will be eliminated at the end of the turn. As he looks at his God card, Dark Bakura tells Dark Marik to discard his hand, and he laughs, thinking that the combo is perfect; because the more cards there are in the Graveyard, the more power his Occult Deck has. Discarding his hand, Dark Bakura tells the sprits of the dead to wait for him in the Graveyard, their time is coming. Dark Marik does likewise. As the players re-draw their cards, Dark Bakura admits that there are some risks, as he loses some Life Points. He loses 100 for each card he discarded, reducing him to 2900 Life Points, and he laughs as the gash in his shoulder cuts through the rest of his torso, and his right elbow vanishes. Dark Bakura remarks that it's a small price to pay to defeat God. Dark Marik doesn't answer, and Dark Bakura taunts him further; Dark Bakura may look bad now, but in the end, it'll be Dark Marik who disappears. Dark Marik ends his turn. 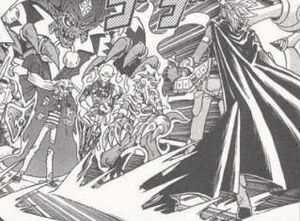 Dark Marik laughs at the card that he's drawn.

Dark Bakura draws, then he Sets a card and sacrifices "Gelnia" to Summon "Puppet Master, Controller of the Dead," the lord of the dead. The moment the "Puppet Master" appears, its effect is activated. The strings attached to its fingers pull "Dark Necrofear", "Gelnia" and "Headless Knight" from the Graveyard, much to the horror of Dark Marik. Dark Bakura loses another 1000 Life Points, though he comments that no-one said it was easy playing with dead things. His Life Points drop to 1900, and he laughs, a chunk of his left thigh and a larger fragment of his torso vanishing, though the Millennium Ring is unharmed. Dark Marik is still on 4000 Life Points, but while Dark Bakura is the one losing Life Points, Dark Marik is the one at a disadvantage. Dark Bakura admits that Special Summoned monsters can't attack the turn they appear, but on the next turn, when Dark Bakura mounts an all-out attack, Dark Marik's Life Points will drop right to zero. Licking his lips, he tells Marik that it's his turn. Looking at the army of monster in front of him, Dark Marik slowly draws, as Dark Bakura thinks that he's won.

And then Dark Marik bursts out laughing as he looks at his card. Dark Bakura angrily asks what Dark Marik is laughing about. Dark Marik replies that he's going to kill Bakura in the next turn. He explains that he will show Dark Bakura the second special power of "Ra," a power even his other self doesn't know. Dark Bakura is shocked to hear about "Ra's" second power.

Turn 3: Dark Bakura
Dark Bakura's hand contains "Dark Necrofear", "Destiny Board" and three other cards to be later revealed. He Sets two cards, and then he Normal Summons "Gelnia" in Defense Position. (1300/1200)

Turn 4: Dark Marik
Dark Marik activates Spell Card, "Card of Sanctity", allowing both players to draw cards until the hold six cards in their hand. Dark Bakura activates his Set Spell Card "Dark Designator", allowing him to declare a Monster Card name, and add the declared card to Dark Marik's hand if it is in his Deck. He declares "The Sun Dragon Ra", and Dark Marik adds "The Sun Dragon Ra" from his Deck to his hand. Dark Bakura activates his Set Trap Card, "Multiple Destruction". Since a player holds at least three cards, both players discard their hands, then draw five cards. Dark Bakura then takes damage equal to 100 times the number of cards he discarded. (Bakura: 2900)

Turn 5: Bakura
Dark Bakura draws. He Sets a card and then he Tributes "Gelnia" to Normal Summon "Puppet Master, Controller of the Dead" (0/0). The effect of "Puppet Master" activates since it was Summoned, Special Summoning three monsters from Dark Bakura's Graveyard, but he must pay 1000 Life Points (Bakura: 1900). He Special Summons "Dark Necrofear" (2200/2800), "Headless Knight" (1450/1700) and "Gelnia". Since Special Summoned monsters cannot attack in the turn they are Summoned, he ends his turn.

Turn 6: Dark Marik
Dark Marik draws what appears to be "Monster Reborn", based on his reaction to the draw.

Duel continues in the next chapter...