"The Face of Truth" is the seventh chapter of the Yu-Gi-Oh! manga. It was originally printed in the Weekly Shōnen Jump magazine in Japanese. Its first English release was in the Shonen Jump magazine. It has been reprinted in volume 1 of the tankōbon and volume 1 of the bunkoban. This chapter is the only manga appearance of Miho Nosaka, who becomes a main character in Toei's Yu-Gi-Oh! anime.

Jonouchi gets Yugi to help Honda with his crush on Miho Nosaka. However this gets them into trouble with the teacher Ms. Chono.

Jonouchi calls after Yugi. Yugi greets him back, but starts to worry when he sees he's with Hiroto Honda. Honda always makes Yugi carry his stuff and buy him dirty magazines. 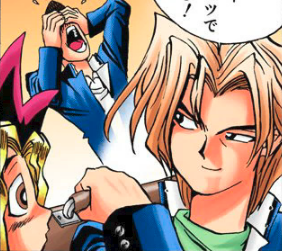 Jonouchi tells Yugi that Honda is in love.

Jonouchi says it's a good thing Yugi's here and they've got something to discuss with him. Honda starts to wildly object to telling Yugi. He believes Yugi has a grudge against him and will tell everybody. Jonouchi promises Yugi isn't like that and asks Yugi to promise to keep a secret between the three of them. Yugi promises and Jonouchi tells him that Honda is in love. Mortified Honda clasps both his hands onto his face. Yugi looks at him blankly, but Honda starts to shake Yugi accusing him of laughing.

Jonouchi continues and tells Yugi that the girl Honda likes is Miho Nosaka, the shy student librarian, from their class, nicknamed "Ribbon". Even though Honda doesn't stand a chance with her, Jonouchi says, he wants to get a present to get her attention and that's where Yugi comes in, since his family shop sells all sorts of weird stuff. Yugi tells them that his shop sells games, which Honda thinks is useless in this case, but they decide to give it a try anyway.

The three boys ask Yugi's grandfather, Sugoroku Mutou for help. He produces a jigsaw puzzle, saying this is how he met Yugi's grandmother. Honda is to write his feelings down on the puzzle, break it up and send it to Miho, who will assemble it to read the message. Jonouchi bursts out laughing at the idea of Honda with something like that. However Honda takes the puzzle and says it's just what he needs.

Honda gives Sugoroku the money, but having never written a love letter, he doesn't know what to write. He turns to Yugi and demands him to write it. He presses Yugi's hand against his heart and tells him to take this passion and turn it into words. He then grabs Yugi saying that if Miho turns him down, he'll kill him. 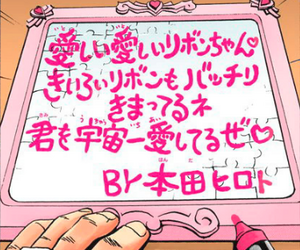 The letter, in the Japanese version.

Yugi stays up all night, thinking of what to write, having never written one either. He comes up with the following message.

My beloved Ribbon
You look perfect in
your yellow ribbon.
I love you more than
anything in the universe.
From Hiroto Honda

Yugi then breaks up the puzzle and wraps it.

The next day, Yugi, Jonouchi and Honda come up with three plans to give Miho the present: give it to her directly, mail it to her house or sneak it into her desk. They decide to go with the third option and went to the classroom an hour early to sneak the present into Miho's desk.

Honda reminds Yugi that the message better be good; he doesn't want her misunderstanding him. Jonouchi slips the present into Miho's desk and Honda says there will be hamburgers on him if this goes well.

In the hallway, the teacher Ms. Chono walks past a group of students, who comment on her sexual appeal and the fact that she expelled 15 students in the last 6 months. This earned her the name "The Wicked Witch of Expel". 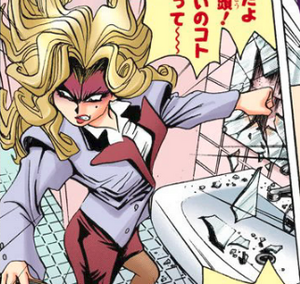 Chono meets the vice-principal, who asks how her omiai went. Chono titters that the man wasn't up to her standards and leaves for class. The vice-principal watches her leave and says to himself that her perfume drives him wild and he'd like to marry her.

Over in the classroom, the other students have arrived, but Miho hasn't noticed the puzzle yet. Honda's face is bright red, his heart is beating insanely and he can barely sit still. Jonouchi is entertained by Honda's current state and Yugi hopes this goes well for Honda's sake.

Over in one of the bathrooms, Chono smashes a mirror with her fist, enraged that the vice-principal had the nerve to ask her about the omiai. She had intended to turn down the man she met the omiai herself. Dating is her greatest pleasure, as it is her hobby to trample on the hearts of the "drips in the world", but he took the pleasure away from her, by turning her down. She won't forgive him for this. Looking in what's left of the mirror, she notices her outburst has damaged her face and starts to cover it with more make-up. She decides she'd better blow off some steam.

Ms. Chono goes to her class, which happens to be Yugi, Jonouchi and Honda's class. Before they start, she tells the class that they're to empty the contents of their desk and bag onto the top of their desks for an inspection.

Yugi, Jonouchi and Honda foresee trouble and start to worry. Miho finds the gift under her desk. Up at the front of the room, Chono smiles at how one word from her has gotten the students terrified. Chono proceeds to check the students desks and finds the puzzle on Miho's. Miho looks down in shame and says she doesn't know what it is, she just found it in her desk. Chono rips open the present and finds the jigsaw.

Chono takes the puzzle back to her desk and starts to assemble it. She reads out the message as she assembles it, causing the rest of the class to roar with laughter. Before she adds the last few pieces revealing the sender, Chono demands to know who gave Miho the puzzle, as underage dating is against school rules and this puzzle is a date waiting to happen. She calls the sender to stand up, lying that she may forgive him if he confesses. 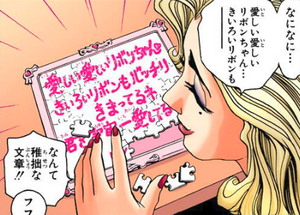 Chono works on the puzzle.

Honda prepares to get-up, but Yugi stands up first, claiming that he wrote the letter. The class start laughing at him. Jonouchi stands up saying "No", he was the one who put it in her desk, while the class continue laughing. Jonouchi thinks to himself that it doesn't matter if Miho hates him and Yugi or if the class laugh at them, Honda will still have another chance, but then Honda stands up, thanking Yugi and Jonouchi and saying that it's his message in the puzzle.

Chono asks why there are three of them. Only one can be guilty, so the other two must be lying, she thinks, but Jonouchi insists that none of them are lying. Chono titters and says she'll finish the puzzle and reveal the guilty party's name and when she finds out who it is, he'll be expelled. 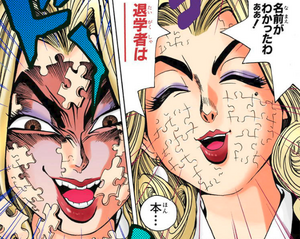 After Chono inserts two of the remaining four pieces, Yugi changes to Dark Yugi, who turns the jigsaw into a Shadow Game, Dark Puzzle, through the power of the Millennium Puzzle. Now as Chono hurts others, she too will be hurt. Chono finishes the puzzle and announces that she has the name. Before she can call it out, her make-up starts to crack and fall apart in the shape of jigsaw pieces.

The students start to point and gasp at Chono's face. Yugi says he's removed the make-up of her soul and this is Chono's true face, no matter how much make-up she piles on, she can't cover her ugly nature.

Chono dashes out of the room, saying this class never happened and if they reveal her secret she'll get them. 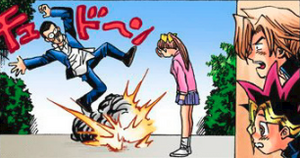 Honda plucks up the courage to ask Miho out directly, but she respectfully turns him down.

Jonouchi tells Honda to cheer-up and offers to buy him a hamburger. Yugi narrates that something changed between the three of them after that.

Yu-Gi-Oh! (Toei) episode 01010: "The Pressing Beautiful Teacher - A Secret Mask" is based on this chapter. While Miho Nosaka was only a one-shot character in the manga, she was made into a main character in this anime.

Since Miho already often hung out with Yugi, Jonouchi, Honda and Anzu, Honda's interest in her wasn't the subject of this episode. A girl called Mayumi instead wanted to give something to Jonouchi.

Mayumi asked Miho, Anzu and Yugi for help, as they were already close to Jonouchi, so Yugi suggested they check his grandfather's shop and got the love jigsaw puzzle there.

Ms. Chono took the puzzle from Jonouchi after he found it on his desk. As she started to read out the message, Anzu stood-up, claiming to have sent it and said that Ms. Chono should not be reading other people's messages like this.

This resulted in Anzu complaining that school rules are too strict, so she ends-up collecting signatures for a petition to change this, at the risk of being expelled should she fail. However Chono gets a group of bullies to destroy the petition and pardons them from trouble they were already in.

Dark Yugi faced Chono in a Shadow Game, involving putting broken glass together like a jigsaw, while blindfolded. Chono cheated by removing her blindfold, so Dark Yugi inflicted a Penalty Game, where her makeup peeled away whenever she tried to enforce strict rules.