"Jonouchi!! Soul Battle!! (Part 1)" is the forty-eighth chapter of the Yu-Gi-Oh! manga.

Jonouchi hears of a gang using a yo-yos to mug people and vows to teach them a lesson.

At school, Honda and some classmates are astonished as Jonouchi claims to have a "super yo-yo". Jonouchi holds up his Yovega Fireboy, claiming that yo-yos are the hottest items on the street right now and everybody wants one. Someone asks if something so old could really be so popular. Yugi, who has his own yo-yo says that they can and as he rolls his up and down explains that these new yo-yos are designed so that they are easy to play with.

Jonouchi starts to show off his tricks, which he calls his "yo-yo tech". He starts with the basics; dribbling. He performs his "long sleeper", in which he lets his yo-yo drop the end of the string, where to the others' surprise it keeps spinning. He then puts it on the ground while it's in "sleep mode" and rolls it back along the string, calling it "parade the pooch" ("let the dog out" in the Japanese version). His classmates burst out laughing and point out that that is the old "walk the dog" trick and he is just showing off by giving it a new name. Determined not to lose them, Jonouchi says he'll show them something really cool, but thinks to himself that he hasn't tried this one before. He announces that he is performing "loop the loop" and swings his yo-yo in all directions, causing everyone to run for cover. This results in Jonouchi being tied up by the yo-yo.

Nezumi tells Jonouchi to cut it out as he hates yo-yos. Jonouchi wonders what kind of weird person doesn't like yo-yos and Yugi insists that yo-yos are fun and Nezumi should give one a try to see if he likes it. Nezumi directs their attention to a bruise covered in a cotton pad on his face and asks if they have heard about the attacks going on around here. Yugi and Jonouchi are unfamiliar, so he elaborates that there is a gang using yo-yos to mug people. (In the English version, he specifically says that the gang are mugging kids at this school.) Nezumi tells them that he was walking alone at night and suddenly became surrounded by three guys, who demanded that he hand over all his money. When he refused and tried to escape, they took out their yo-yos and used them to hit him. Back in the classroom, Nezumi slams his fists on the table and hangs his head.

Jonouchi is outraged that a gang are using yo-yos to steal from the weak. In the Japanese version, he says that that is unforgivable. In the English version, he says that he wishes they were here right now, so he could teach them a lesson. Honda comments that a yo-yo can be a dangerous weapon and Yugi is also disgusted that yo-yos are being used to hurt people. Nezumi pleas with Jonouchi to get back at them for him and informs him that he knows where to find them. Jonouchi thinks that most guys who have been mugged never want to go back to the place where it happened. Since Nezumi does, he has earned Jonouchi's respect. Jonouchi agrees to do it and says that Nezumi will get his revenge. Honda offers to come too, but Jonouchi says that that shouldn't be necessary since there are only three guys. Nezumi suggests that Yugi comes too. Since Nezumi gets uncomfortable around fights, he might feel better with someone like Yugi around. Yugi agrees to come and Jonouchi vows to get revenge, saying "Those who abuse people with yo-yos will be punished by yo-yos". (In the English version, he says "Those who laughed at yo-yos will cry at yo-yos.) Honda sighs, commenting "whatever that means...".

Nezumi guides Yugi and Jonouchi to the area where he mugged. Yugi notes that it's a very desolate area with a bad atmosphere. (In the English version, he says it's a scary neighbourhood, lacking shops or houses.) Jonouchi asks Nezumi about how the attackers used the yo-yos. Nezumi describes that they surround their target and threaten them by swinging yo-yos. If you even take just one step you'll get hit by them, so your only choice is to give them what they want. This fuels Jonouchi's urge to teach the attackers a lesson.

They finally reach an abandoned warehouse, which Nezumi is the place. Yugi gets a strange feeling that he's been here before. The trio enter and Yugi suddenly remembers when he was here before. Jonouchi recognizes it too; It's the "torture chamber" Hirutani and his gang used. They gaze at a familiar hook hanging from the ceiling. 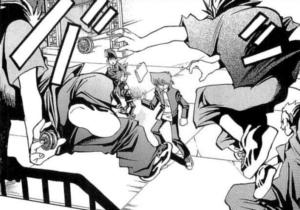 The guys are ambushed by Hirutani's gang.

Jonouchi has a bad feeling about this and Yugi thinks to himself that Hirutani was someone who used to hang with Jonouchi and has tried to force Jonouchi to rejoin his gang through unsavory means. Jonouchi hears a noise and suddenly thugs who were hiding in various parts of the warehouse come out of hiding, clasping onto yo-yos and leap down to the ground floor. 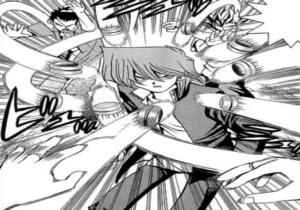 Jonouchi surrounded by the swinging yo-yos.

There are much more than three of the gangsters and they close in on Yugi, Jonouchi and Nezumi. Jonouchi tells Yugi to get back. The gang start swinging the yo-yos at them. Some of the gangsters are ordered to go around their backs and surround them. Jonouchi orders Yugi and Nezumi to get out of there, so Nezumi grabs Yugi by the arm and tries pulls him away. Yugi looks at back at Jonouchi, now surrounded by yo-yos, but Nezumi urges him to come on. Jonouchi is unable to move with all the yo-yos swinging near him. He realizes that this attack was planned and these guys knew they were coming.

Someone laughs and asks Jonouchi how it feels not being trapped. Jonouchi sees that the voice came from Hirutani, who informs him that one wrong move will result in being hit by the yo-yos. Hirutani says that he is not going to give up that easily and will force Jonouchi back into his gang at any cost. He doesn't want to make Jonouchi just a low-ranking henchman, but rather his second in command. Jonouchi calls Hirutani a jackass and asks why he'd want to join the gang. (In the English version, he calls Hirutani a boss money and says that he wouldn't like it in his cage.) Hirutani laughs and asks if Jonouchi is sure he wants to make him his enemy. (In the English version, he says that the first thing he has to do is get Jonouchi to stop mouthing off.) 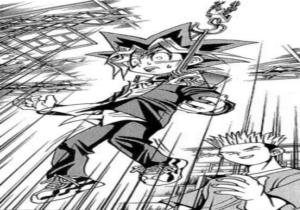 The gang hang Yugi from the hook.

Hirutani directs Jonouchi's attention to Yugi, who is now held captive by one of the gangsters, while Nezumi calmly stands still and watches. Hirutani gives the order to "do it". The gangster pulls down the hook hanging from the ceiling and links it to the rope around Yugi's neck, holding the Millennium Puzzle. The hook is then raised, dragging Yugi up with it and tightening the rope around his neck, making it hard to breath. Despite this, Yugi still hopes that Jonouchi doesn't listen to what Hirutani says. Hirutani thanks Nezumi and reports that everything went according to plan. With Jonouchi still trapped by the yo-yos, Hirutani gives him a choice; Either swear to join the gang or watch Yugi friend die. Yugi still mentally pleads with Jonouchi not to do it.

Jonouchi reminds Hirutani that he had said there was no way out of the yo-yos and then proceeds to push his way through the yo-yos, taking several blows to his head. one of the gangsters wonders if Jonouchi wants to be beaten to death by the yo-yos. (In the English version, he says that Jonouchi went into the "yo-yo murder net".) Hirutani is surprised and annoyed. Nezumi's jaw drops and he wonders why Jonouchi is risking his life like this.

Jonouchi thinks he's wouldn't let a friend die and is even prepared to give his own life for him. (In the English version, he thinks that anyone who stands and watches a friend die doesn't have a right to live. Jonouchi makes his way over to Yugi and lifts him high enough to unhook himself. Hirutani damns Jonouchi and orders his gang to hit him harder. Jonouchi turns to Hirutani and announces that the pain he is feeling now is noting compared to the pain of betraying his friend. He tells Hirutani to brace himself, because now that Yugi is safe, he's ready for his counter attack.

Episode 9 "Explosion - Ultimate Yo-Yo Technique" of the Toei anime is based on the story from this chapter and the next amalgamated with the one from chapters 11 and 12.