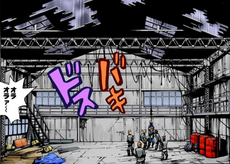 The torture chamber, with Jonouchi tied to the hook.

The torture chamber is a name given to an abandoned warehouse in the Yu-Gi-Oh! manga, used by Hirutani and his gang. Jonouchi and Yugi were brought here twice over the course of the manga, each time to be punished by Hirutani.

The warehouse's most disturbing feature is the hook hanging from an overhead girder. The gang uses it to tie people's hands over their head.[1] They once hung Yugi there by the neck, using the rope around his Millennium Puzzle.

After Jonouchi, who was forced back into the gang, got into a fight with another member of the gang, Hirutani order the rest of the gang to seize Jonouchi and bring him to the torture chamber. Once there, they tied his hands to the hook and attacked him with stun guns. However Jonouchi managed to kick one of the members away, knocking him unconscious.[2][1]

Dark Yugi arrived while Jonouchi was barely conscious. He allowed himself to be hit by a gangster, so he could secretly set up a trap; He lured the gang into a puddle and as he stood up, he covertly put a metal bar under the unconscious member's arm and hung the Millennium Puzzle over his forehead. Dark Yugi then challenged the gang to a game, where the gang must find a switch to a time bomb before it goes off. The gang failed to find the true switch; Rainwater trickled down the Millennium Puzzle and onto the unconscious member, waking him up, causing him to move his arm suspended on the metal bar, hence dropping his stun gun into the puddle and electrocuting the gang.[1]

Yugi and Jonouchi were lured into the torture chamber a second time by Nezumi. This time, Jonouchi caught a number of the gangsters' yo-yos on the rope from Yugi's Puzzle and hung them from the hook by their fingers. Dark Yugi caused the remaining gangsters to fall through a rooftop, while Jonouchi fought Hirutani.

Its appearance in the anime was a mixture of its two manga appearances.[3]

The warehouse appeared in the Yu-Gi-Oh! anime, but there was no mention of any connection to Hirutani, who did not feature in this series.

Joey Wheeler fought a gang of delinquents in the warehouse to protect a young boy they had been bothering. Tristan Taylor arrived and helped Joey fight off the delinquents, but Joey got annoyed afterwards, claiming it was his fight and he could have handled them by himself. Joey later reflected on this moment when he realized that Tristan had always been by his side whenever he got into trouble.[4]