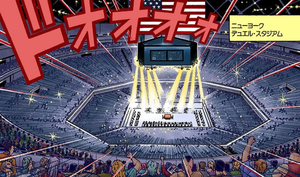 The New York Duel Stadium (ニューヨーク デュエル・スタジアム Nyū Yōku Dyueru Sutajiamu) is an arena for playing Duel Monsters in the Yu-Gi-Oh! manga and anime. It is where Bandit Keith and Maximillion Pegasus Dueled.

Duel Monsters was popular in the United States, with players said to be in excess of twenty million at one point. This warranted many tournaments, some of which had large prizes and took place in stadiums.

Keith Howard, the number one Card Professor in the United States, challenged Maximillion J. Pegasus, the creator of Duel Monsters to a Duel. At first Pegasus was not interested, but later accepted under the conditions that the prize be one million U.S. dollars, the Duel take place in a large stadium capable of holding fifty thousand people, be broadcast nationwide and the earnings be split with the sponsors and TV stations. Keith agreed and the Duel took place in the New York Duel Stadium.

Pegasus used the time before the Duel to gather children unfamiliar with the rules and teach them how to play. When the Duel started, Pegasus did not touch his cards. He stared at Keith for a moment, and performed a Mind Scan, reading Keith's plans for the Duel. He wrote down Keith's cards, strategies and how to counter them on a piece of paper, before calling over one of the children he had been speaking to earlier, Tom. Pegasus gave Tom the paper and left the table, asking Tom to take over for him. Tom won the Duel, following the instructions Pegasus had written for him, and Pegasus exploited Keith's humiliation to advertise the game.

In the anime, the stadium was used for the United States The King of Duelists tournament (Intercontinental Championship in the English dub), with Keith and Pegasus facing each other in the finals. Pegasus used the opportunity to humiliate Keith and advertise Duel Monsters in the same fashion as in the manga.