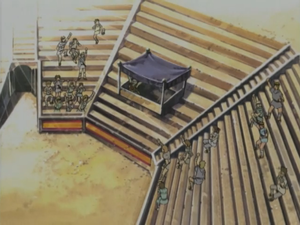 The Shadow Coliseum, known as the Dark Coliseum (闇のコロシアム Yami no Koroshiamu) in the Japanese version, is a location in the Legendary Heroes virtual reality in the Yu-Gi-Oh! anime.

The coliseum hosted a competition where challengers could win a "Niwatori". Participants would have to battle their champion, Mai Valentine, who used the name "Madam Butterfly", until their Life Points reached 0. The manager had trouble finding challengers because the champion was so strong, but allowed Joey Wheeler to take part, after Joey, Yugi Muto, and Mokuba Kaiba saw the advertisement for the "Niwatori".[1]

Joey and Mai began to battle until they recognized each other. The audience became irate when the players stopped fighting. Mai stole the "Niwatori" card from the manager and she, Joey and their friends were chased out of the coliseum by the angry audience.[2]