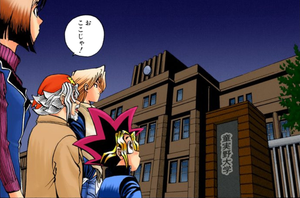 Domino University is a university in Domino City in the Yu-Gi-Oh! manga.

Professor Yoshimori worked at the university in the archaeology department. In 1996, they were part of a team that discovered a Pharaoh's tomb in the Valley of the Kings from the New Kingom Era, around 1580-1314 B.C.[1]

After the death of Curator Kanekura, who sponsored the exhibition, Yugi Mutou and his friends went to the archaeology department to cheer up Yoshimori. Shadi, who had killed Kanekura for defiling the tomb was planning on judging whether or not Yoshimori should be similarly punished. However when he saw that Yugi was coming to see Yoshimori, he instead decided to use Yoshimori as a puppet in a Shadow Game to test if Yugi was worthy of the Millennium Puzzle.[2] Shadi set up the Trial of the Mind Shadow Game on the roof of the university and played a number of games with Dark Yugi, while putting his friends in danger around the University.[3]