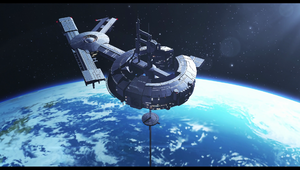 The KaibaCorp space station appears in Yu-Gi-Oh! The Dark Side of Dimensions.

The station is connected to the Kaiba Corporation headquarters via a long tube, a space elevator. Seto Kaiba can enter a pod and be transported to the station.

The station holds a highly intelligent A.I. that capable of completing the Millennium Puzzle.

The station's other facilities include a prototype system. The user sits in a pod, and the system sends the down through the space elevator in order to send them across dimensions. The station also hosts a virtual reality Duel room. Kaiba used this to Duel Virtual Dark Yugi.

After his efforts to revive Atem with the Puzzle failed, Kaiba obtained Diva's Quantum Cube. Aboard the station, Kaiba spoke to Mokuba about a system. Mokuba warned Kaiba that the system was untested but Kaiba continued with it anyway. With the system connected to the Quantum Cube, Kaiba traveled down the elevator at high speed to cross into what seemed to be the underworld.