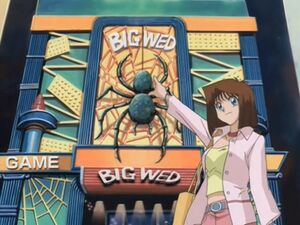 Big Web is probably the name of an arcade in Domino City. In the Japanese anime, it's called Big Wed. In the English anime, the text is erased. In the manga, it's simply called Game.

Among its games are a claw crane, Super Dancer,[1] and Virtual VS.[2]

The Muscle Hunters went here to spend the money they were given by the Junky Scorpion owner for stealing back a pair of Air Muscle shoes that he sold to Jonouchi. Jonouchi, Honda and Yugi then found them here and beat them up to try and get back the shoes.[3]

Honda, Anzu and Yugi passed the arcade while searching for Jonouchi after he missed school.[4]

The high scores on many of the games were connected to arcades across the country and under the name KAI, Seto Kaiba achieved the highest score on many of the games. Yugi and Jonouchi went to the arcade once with Jonouchi set on beating one of Kaiba's scores. While he tried that, Yugi played Virtual VS and kept getting challenged to games by Street Fighter, who was also in the arcade. Angered over constantly losing, Street Fighter beat-up Yugi in reality and stole his Millennium Puzzle. However Jonouchi went after Street Fighter and beat him a real fighting game, winning back the Millennium Puzzle.[2]

Dark Yugi and Anzu went here among other places when they went on a date. Anzu was challenged to a game of Super Dancer by Step Johnny, which she won.[5]

Yami Yugi and Téa Gardner went here among other places when they went on a date. Téa was challenged to a game of Super Dancer by Johnny Steps, which she won.[1]

In the reconstruction of Domino City within the Virtual World, there was an exit to the real world. Noah Kaiba used this to escape in Mokuba Kaiba's body. Afterwards he had a change of heart and helped Yugi, his friends and Seto Kaiba escape. Noah then returned to the virtual world to allow Mokuba to return to the real world in his own body.[6]

During the Duels engaged between Weevil Underwood and Rex Raptor versus Yami Yugi and Joey Wheeler respectively, a flashback occurred showing the former two exiting this arcade before extorting a copy of "Dark Ruler Ha Des" from a boy asking for their autographs.[7]