From Yugipedia
Jump to: navigation, search
This article is about the location. For the card, see "Duel Tower". 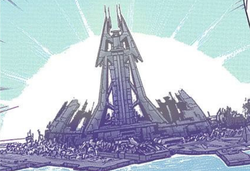 The Duel Tower at KaibaCorp Island is a location in the Yu-Gi-Oh! manga and anime.

The OCG card "Duel Tower" and the bunkoban tarot card, "The Tower" are based on this location. 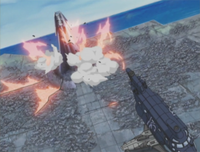 The destruction of the Duel Tower.

The Duel Tower was the location of the semi-finals and the title match of the Battle City tournament. The four finalists Yugi Muto, Seto Kaiba, Joey Wheeler, and Marik Ishtar first participated in a Battle Royal Duel on four elevators leading to the top of the tower in order to determine the pairings for the semi-finals, where the first two Duelists to run out of Life Points would have the first match, and the remaining two would take the next.[1][2] Marik Ishtar was the first Duelist defeated, followed swiftly by Joey Wheeler.

The top of the tower then became the site of the three final Duels of Battle City starting with the first semi-final match of Joey VS Marik,[3][4] where Marik Ishtar won by default after Joey was rendered unconscious. It was followed by the second semi-final match of Yugi VS Kaiba, featuring a special Solid Vision "Sky Duel Coliseum" at the top of the tower, which ended in Yugi's decisive victory.[5][6] Finally, the title match of Yugi VS Marik took place, which ended with Marik's surrender to Yugi.[7][8]

In the anime only, just before the title match, the foot of the tower was also host to a small losers bracket consisting of Joey challenging Kaiba for third place, which ended in Kaiba's victory.[9]

As the final act of Battle City, wishing to put the legacy of Gozaburo Kaiba behind him, Seto Kaiba had the Duel Tower and other parts of the old military base located on KaibaCorp Island filled with explosives. A sudden announcement was made to the oblivious contestants of this fact, giving them a short amount of time to evacuate the island. At the same time, Kaiba and his brother Mokuba Kaiba seemingly disappeared, which delayed everyone's departure until the very last moment while they searched for them. However, as the island exploded, and it seemed the two had perished, the Kaiba siblings rose from the flames aboard a jet plane hidden on the island (which is in the shape of a "Blue-Eyes White Dragon" in the anime).[10][11]

The Duel Tower appears on the cover of the Battle City DVD.[12]

Duel Academy had its Academy Tower modeled after the Duel Tower. The tower was capable of elevating out of the academy's roof and retracting back inside. It was reserved for special occasions and many students wished to be able to Duel on top of it.[13]