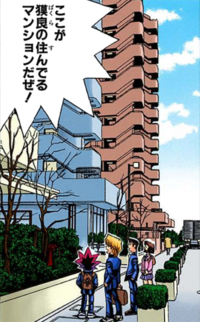 The complex that Bakura's apartment is in

Bakura's apartment is the residence of Ryo Bakura in the Yu-Gi-Oh! manga. It is apartment 601 in a complex located in Domino City. It is where Dark Bakura played his Monster World game against Yugi Mutou and his friends.

People who played games with Bakura would lose consciousness and end up in comas. Unbeknownst to Bakura, this was caused by Dark Bakura defeating them in Shadow Games. This led to people avoiding Bakura and him constantly changing schools. When he transferred to Domino High School, he moved to the apartment by himself, away from his family.[1]

Bakura tried talking Yugi Mutou, Katsuya Jonouchi, Anzu Mazaki, and Hiroto Honda out of coming to his apartment to play Monster World, fearing they would end up like his previous gaming friends. That night in the apartment, while Bakura was writing a letter to Amane Bakura, Dark Bakura communicated with him for the first time. Dark Bakura admitted to being the one responsible for what happened to Bakura's old friends and then took over Bakura's body in order to inflict the same fate upon Mr. Karita, who had bullied Bakura earlier.[1]

Despite Bakura's warning, Yugi and his friends showed up at his apartment to cheer up and prove what happened to his old friends was a coincidence. Bakura tried to stop them, but Dark Bakura took over his body and welcomed them inside. He showed them where he had the Monster World campaign set up and invited them to play.[1] During the game, he sealed Anzu, Jonouchi, Honda, and Yugi's souls within their character miniatures. Dark Yugi then took control of Yugi's body to finish the game.[2]

In Yu-Gi-Oh! Duel Monsters II: Dark duel Stories, the complex containing Bakura's apartment is in the background when the player faces Ryou Bakura.