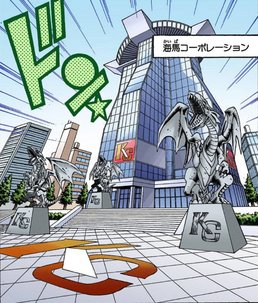 The KaibaCorp headquarters is a corporate structure for the company, KaibaCorp, in the Yu-Gi-Oh! manga and anime.

Among its departments are research and development, which has a division specifically for collectible card games. There are three Blue-Eyes White Dragon statues outside the building.

Seto Kaiba conducted the final test for the second generation Duel Disk in the building's research and development facility. He faced the Duel Machine in a Duel, while Mokuba Kaiba and a team of researchers observed. Chief Kuwabara expressed concern that Kaiba might not be able to win, as the Duel Machine was using Kaiba's Deck from Duelist Kingdom, with three "Blue-Eyes White Dragons". However Kaiba managed to win using "The God of the Obelisk", whose power overloaded the machines, causing them to go haywire.[1]

At some point, the building was made taller and underwent some design changes.[2]

Extensive work on "Operation Neurons" took place in the Duel Disk research and development department. They developed the World of Duel Links and received over a million applications for test monitors. Out of them, a sample of 200,000 Duelists was taken, with network data in every branch of Japan providing them feedback. From here, Kaiba logged into the Duel Links virtual reality and was impressed by the capabilities of Sera, whose "Prana" avatar, he observed.[2]