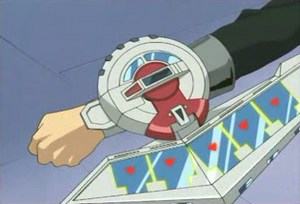 The KC mass production Disk in the anime 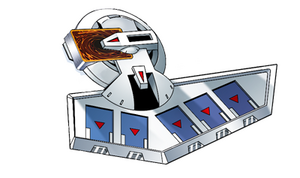 The KC mass production Disk in the manga

The KC mass production Disk is the second Duel Disk model made by KaibaCorp. It was first issued to participants of the Battle City tournament.

It is prominently used throughout the Yu-Gi-Oh! second series anime. 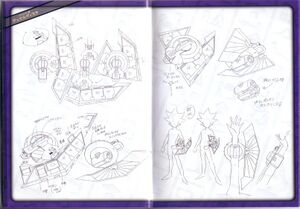 Unlike the previous Duel Disk, it did not need to be thrown. When it first appeared in the anime, sealers flew out of the Duel Disk to the sides of the Dueling area to produce the Solid Vision holograms. These were removed later. In the manga the holograms were projected straight from the Duel Disk itself.

The Monster Card Zone is along an arm blade. The Spell & Trap Card Zone is a series of slots behind each Monster Zone. In the anime, the blade could be folded up when not in use. In the manga, it could not be folded up, nor do the sealers that produce the Solid Vision make an appearance. In the manga, there is no Spell & Trap Card Zone slots, but instead the Monster Card Zone serves an all purpose for every card, meaning that both players are limited to five cards. The manga and anime designs of the Battle City disk are notably different in other ways: the manga design is a single solid piece, while the anime design "folds" into a more compact shape when not in use.

Directly underneath each monster slot is another slot for Spell and Trap Cards. If a Duelist was to activate a Set card, they would activate a button on the round portion of the disk. Another slot can open on the front end of the disk that is used for the Field Spell Card. The center of the disk includes the Main Deck and Graveyard slot and Life Point counter. The bottom part of the Disk, which goes around the user's arm, also contains a retractable cable that could be attached to Dueling Arenas if one player opted not to use a Duel Disk. 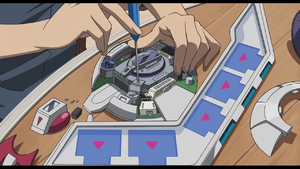 The Disk is able to eject cards the Duelist wants into their hand.

Prior to the Battle City Tournament, KaibaCorp developed the second generation Duel Disk, the first one to be released to the public, which were issued to the participants of Battle City. Originally, only those of eligible ranks to participate in Battle City (at least Level 5 out of 8 stars in the original, or at least 4 out of 5 stars in the dub) could apply for a Duel Disk. After the tournament was over, the device was distributed to public. The disk accepted counterfeit cards printed and used by the Rare Hunters; whether this is an oversight or intentional is unclear, but Kaiba did mention that one of the reasons for the tournament is to flush out the Rare Hunters, so the latter is probable.

These Duel Disks were the only model used until Doma used the Chaos Duel Disk. 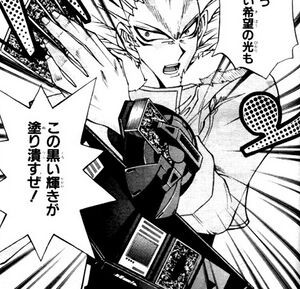 In Yu-Gi-Oh! R, Richie Merced wielded a Black Disk, a special one-of-the-kind Duel Disk that only the strongest individual of the Card Professors Guild is allowed to wield. It is a KC mass production Disk with jet black colors, produced by Yako Tenma. Keith Howard defeated Richie and took the Disk for himself, only to lose a duel (and the Disk) to Katsuya Jonouchi, who gave it to Tilla Mook as returning the Duel Disk he borrowed from her earlier. Tenma installed an anti-cheat alarm onto the device, making it unable to accept cards that were not drawn from the Deck, as Keith found out when he attempted to sneak a "Ring of Destruction" from his wristband onto the zone.

In Yu-Gi-Oh! GX these Duel Disks were used by the students at Duel Academy prior to being given the Academia Disks.

In Yu-Gi-Oh! 5D's, this version of the Duel Disk was used by citizens of Satellite, while the people in New Domino City used more modern versions. Yusei Fudo uses a modified version of this Disk, while Jack Atlas's Disk resembles this one in style, but with a straight edge.

In Yu-Gi-Oh! ARC-V, this model of Duel Disk was seen being used by the people of the Standard Dimension before Leo Akaba reinvented the ARC System.[1]

In Yu-Gi-Oh! VRAINS, the body of the Duel Disk used by Yusaku Fujiki is similar to this model. 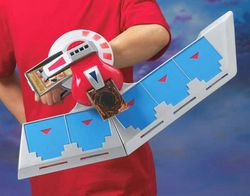 The toy company Mattel produced replicas of this Duel Disk. There are a couple of notable differences between the Mattel Duel Disk and its fictional counterpart. Spell and Trap Cards are loaded into the bottom of the blade (the opposite side to the anime version). Most notably, it cannot project holographic images. Also, the edge is not shaped like a blade.

While the toy Duel Disk was advertised as being compatible with the TCG, there are a few flaws that make this impractical:

In Yu-Gi-Oh! World Championship 2007, the KC mass production disk was known as the Cheap Duel Disk.

In Yu-Gi-Oh! World Championship 2008, the KC mass production disk was known as the Standard Duel Disk, and can be unlocked by beating Yami Yugi in a duel 10 times.

In Yu-Gi-Oh! 5D's World Championship 2009: Stardust Accelerator, the player can find this Duel Disk in The Facility.

In Yu-Gi-Oh! 5D's World Championship 2010: Reverse of Arcadia, the player can purchase this Duel Disk from Chihiro for 5 Star Chips.

in Yu-Gi-Oh! 5D's World Championship 2011: Over the Nexus, the player can purchase it for 5 Star Chips.