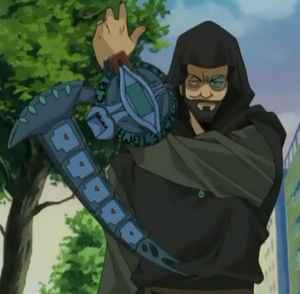 The Chaos Duel Disk is a Duel Disk designed for the members of Doma in the Waking the Dragons arc.

The Chaos Duel Disk resembles a scythed blade. It could fold itself in, by sliding each Monster Card Zone and its corresponding Spell & Trap Card Zone under the one next to it until the field was completely folded into the hinged "spell trigger" part. It then folds into the central part of the Disk, creating a compact form. 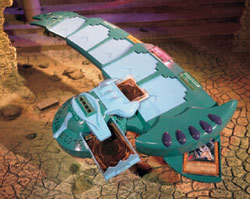 Like the KC mass production Disk, the company Mattel manufactured replicas of the Chaos Duel Disk for use with the real TCG, however with the same flaws as the KC Disk. These include

The toy does not fold up as much as the anime version. The Card Zones similarly slide under another, but the last two do not fold into anything.

The hinge on the toy is the whole of the first and second card spaces, which pushes to the back of the central part and though not as compact as the anime Chaos Duel Disk, it is still the most compact and light-weight of the toy Duel Disks.