Yu-Gi-Oh! Online is an online PC game released in April 2005 by Konami that is based on the Yu-Gi-Oh! Trading Card Game. In the game, players can duel each other online. The game was followed by two sequels, Yu-Gi-Oh! Online: Duel Evolution and Yu-Gi-Oh! Online 3: Duel Accelerator. 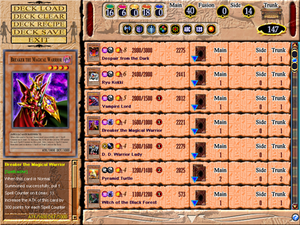 The game includes cards from OCG boosters up to and including Invader of Darkness, as well as a variety of OCG promos.

There are 30 player Levels, Levels 1 through 30. Once a player has played at least 36 duels, he or she can advance beyond Level 1, and must to move from the beginner's lobby to the other lobbies where all players Level 2 and above play. 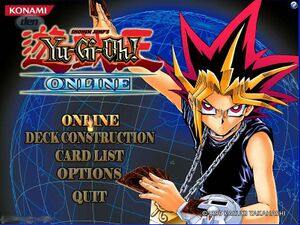 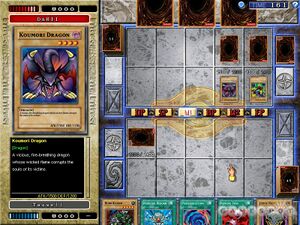 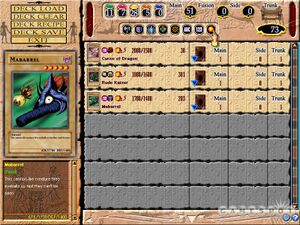 This is an online purchase that is equivalent to 5 Duelpasses (150 Duelpass points). The 5 cards gained from this type of Duelpass are chosen randomly from a set. At one point, sale of the Duelpass 150 was suspended in the United States due to fraud, but since the release of Duel Evolution, the Duelpass 150 is available in United States again.

The USB Duelpass Key is equivalent to 3 Duelpasses (90 Duelpass points). It is a USB device that is sold in retail stores in the United States, such as Toys 'R' Us and Target. It works like a standard USB flash drive, except it only contains the information necessary to transfer game credits to your account. A CD-ROM with the full version of the game is included in the packaging for the USB Duelpass Key. The flashdrive itself has only 128K or so of memory, unusable for anything but the duel pass credits. The 3 cards gained from this type of duelpass are chosen randomly from a set. The USB Duelpass Key is sold only in the United States and Mexico. Players in other locations must get duelpasses from one of the other methods or buy them from a third party. 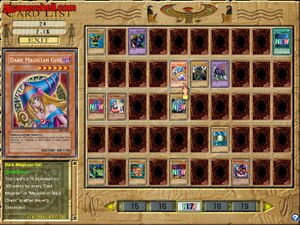 The SMS Duelpass is available in the United Kingdom to date and for a charge of £1 you gain 15 Duel Points and 10MP. It's a quick and popular way of obtaining Duel Points.