From Yugipedia
Jump to: navigation, search
This article is about the internationally released game. For the Japan-exclusive game, see Yu-Gi-Oh! Duel Monsters II: Dark duel Stories.

Players of the game can trade and battle with other players using a link cable.

The subtitle of the game's Japanese name, Tri-Holy God Advent, refers to the coming the three Egyptian Gods in the next game, Duel Monsters 4: Battle of Great Duelist. This is hinted after the game's ending credits, which feature the Egyptian Gods and the text "to be continued".

42 cards featured in Yu-Gi-Oh! Dark Duel Stories were video game-only at the time of the game's release.

Bolded cards were later printed in the OCG.

The following cards were released in the OCG the same day Dark Duel Stories was released.

Each opponent in a stage must be defeated 5 times to unlock the next stage. After this, opponents can continue to be battled for more points and card drops. After defeating DarkNite five times, the player is given the password for the ending credits and an additional Dark Stage appears, with Yami Yugi as an opponent. The opponent for that stage can be changed with a password.

A constructed card. The artwork is grayed out, and the stats are not displayed, because the player does not have sufficient Deck Volume to use it.

Constructed cards can be previewed before they are actually created, allowing the player to review their options before sacrificing parts to get the cards. Constructed cards are always monsters, with the following properties:

"SoulicerCrystal" as a constructed card in Dark Duel Stories.

"Soulicer Crystal" as a regular card in Duel Monsters 4.

While the card construction mechanic itself only appeared in Dark Duel Stories, seven constructed cards were featured as regular cards in Yu-Gi-Oh! Duel Monsters 4: Battle of Great Duelist; two of these cards were later printed in the OCG.

Players can battle other players with a copy of Dark Duel Stories using the Game Link Cable via the versus menu. The Deck can be altered, and a Deck Capacity limit can be chosen, on this screen. Allowed limits are 500, 700, 1000, 2000 and 9999.

The option to take a card from the opponent's chest after winning a battle was removed in this game.

Prompt to select which game to connect with

A trade cannot be conducted unless the player has over 50 cards that are lower in Deck Cost than their Duelist Level.

The player can change their name. Names can be eight characters long. The Japanese version of the game allows kana characters to be used. The English version allows the 26 letters from the English alphabet in upper or lower case to be used.

Cards can be added to the player's chest in the password menu, by entering eight-digit passwords from OCG/TCG cards. There are seven non-card passwords: one makes Solomon Muto give an extra card after each battle, one allows the credits to be viewed, and the other five are for switching the Dark Stage opponent. There are also 106 unusable passwords, which display the message "Can't record password! Try a different password." when entered.

The game does not use rules from the Yu-Gi-Oh! Official Card Game. It uses the rules from its predecessor Yu-Gi-Oh! Duel Monsters II: Dark duel Stories and makes a number of modifications and updates.

The player's initial Deck Volume is 400. It can be altered using these methods, until it reaches the maximum of 9999.

Each card has its Deck Cost printed on it. Although, there is logic that can be used to otherwise determine a card's Deck Cost.

The following cards are Limited, meaning the player can only have a single copy of it in their Deck. This restriction does not apply to CPU opponents' Decks.

The player's Starter Deck consists of the following 40 cards:[1]

Each opponent has a different list of cards the player can get for beating them, with each card on the list having an assigned probability of randomly obtaining it.

Communication Fusions can be performed by trading certain cards. Each Fusion requires #189: "Fusionist" and two other Fusion Material Monsters.

In other languages, players can only connect with another copy of Dark Duel Stories (Duel Monsters III: Tri-Holy God Advent).

By entering 65437205 into the password menu, Solomon Mutou will appear after each Duel to award the player a card.

Cards obtained this way last only during the Duel in which they are formed.

The Extra Deck does not exist in this game. Instead, Fusion Summons are performed during Duels by placing one card on top of another. A card may be placed on top of a card on the field or another card in the hand. If the Fusion is valid, a new card will be formed. If the fusion is invalid, the second card replaces the first.

If a Fusion is performed by placing a card on top of a card on the field, the Fusion Monster will be face-up. If the Fusion Monster has an effect, it will not be able to use it, because only face-down cards may active their effects. This makes the effect of #734: "Thousand-eyes Rest" unusable, unless the player is able to acquire a permanent copy of #731: "Relinquished" or "Thousand-eyes Rest", which they can Summon from the hand.

A Ritual Summon is conducted by activating a Ritual Card and offering three monsters on the field as Sacrifices. A new monster will then be Summoned. Most Ritual Cards require one specific monster as a sacrifice, while the other two sacrifices can be any monster. The two exceptions to this are #667: "Gate Guardian Ritu" and #675: "Ultimate Dragon", which require three specific sacrifices.

A Ritual Summoned monster is placed face-up on the field. If the monster has an effect, it will not be unable to use it, because only face-down cards may active their effects. This makes the effect of #731: "Relinquished" unusable, unless the player is able to acquire a permanent copy of "Relinquished", which they can directly Summon from the hand.

#278: "Petit Moth" and its stages evolve into other cards after being on the field for one turn, in the order shown below.

A number of text changes were made to the English version of the game when it was released in Europe, including: 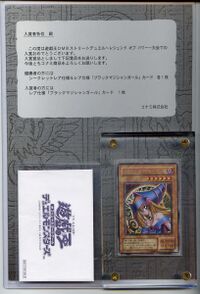 The cards G3-B1 "Panther Warrior" and G3-B2 "Time Machine" were included with the first and second guidebook, respectively.