Yu-Gi-Oh! Power of Chaos: Yugi the Destiny is the first Yu-Gi-Oh! game for PC and the first of the three Power of Chaos games. This first game includes 155 cards, most of which are from Legend of Blue Eyes White Dragon and Starter Deck: Yugi, two are from Metal Raiders, one is from Spell Ruler, another is from Tournament Pack: 3rd Season and the other is from Starter Deck: Pegasus.

In Yugi the Destiny, the player learns how to play the Yu-Gi-Oh! trading card game with Yugi, who teaches the basics of summoning, tributes and other aspects of the game. Additionally, the player can duel against Yugi to collect cards and build up their own collection. Each card features artwork re-created from the card game. In addition to new artwork, Yugi the Destiny features a variety of battlefields and intense duels. 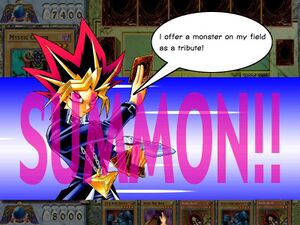 "Once you learn this, you're well on your way to
becoming a master duelist!"
"Let's start off with the Deck."
"Obviously, you can't duel without a Deck."
"Your deck must contain at least 40 cards."
"Also, you can only have a maximum of 3
copies of each card, so don't think you can put
40 copies of the same card in your Deck!"
"This is the Graveyard."
"This is where you place destroyed Monster
Cards and used Spell and Trap Cards."
"During a Duel, you're allowed to check the
cards in your opponent's Graveyard."
"This can be very helpful because you'll know
which cards your opponent has already played!"
"This is the Field Card Zone."
"This is where you Set or activate Field Magic
Cards."
"If your opponent Sets or activates a new Field
Magic Card when you already have one in
play, your Field Magic Card is destroyed."
"That means there can only be one Field Magic
Card in play during a Duel!"
"This is the Fusion Deck Zone."
"This is where you place your Fusion Deck."
"Your Fusion Deck is made up of Fusion
Monster Cards only."
"Be careful: the cards in your Fusion Deck do
not count towards the 40-card minimum
requirement of your Deck."
"This is the Monster Card Zone."
"This is where you Set or Summon Monster
Monster Cards|Cards]]."
"You can only have a maximum of 5 monsters
on your Field at the same time."
"That means if your Monster Card Zone is full
with 5 Monster Cards, you can't set or
Summon another monster until one of your
Monster Cards is destroyed or a Spell or Trap
Card sends it to the Graveyard."
"Make sure to think thoroughly before
summoning a monster because your space is
limited!"
"Last, but certainly not least, is the Spell and
Trap Card Zone."
"This is where you place your Spell and Trap
Cards!"
"You can only have a maximum of 5 cards in the
Spell and Trap Card Zone at the same time."
"I'll explain in detail later, but [[Continuous Spell
Cards]] and Equip Spell Cards remain on the
Field, so think carefully when using these cards
because they use up a slot on your Spell and
Trap Card Zone."
"That's everything you need to know about the
Duel Field!"

"Each duel is divided into 6 phases.
Let's take a closer look at how they break
down."

"There are 3 types of decks:
The Deck, the Side Deck, and the Fusion Deck."
"Your deck is made up of 40 or more cards."
"However, remember that Fusion Monster
Cards are NOT counted toward your 40-card
minimum requirement."
"Also, you can only have 3 copies of each card
in your Deck, so you really have to think about
what cards you're going to play with when
you're constructing your Deck."
"Oh, there's this other rule about Limited Cards..."
"Well, I'll explain that in the next step.
I'm getting ahead of myself."
"The Side Deck is used for a Match."
"After one Duel is complete, you're allowed to
use your Side Deck to adjust the contents of
your Deck."
"For every Side Deck card you put in your
Deck, you have to take a card from your Deck
and put it into your Side Deck."
"For example, if you put 2 cards from your Side
Deck into your Deck, you have to take 2 cards
out of your Deck and put them into your Side
Deck."
"Your Fusion Deck is made up of Fusion
Monster Cards only."
"Remember, these Fusion Monster Cards don't
count towards the 40-card minimum
requirement of your Deck."
"That's everything about Decks!"

Theses are the quotes your opponent says before the (single and/or match) duel.

Quote 1: "Hmm, I wonder how strong your deck is ... Actually, it doesn't matter because I will use all my skills to defeat you, no matter how many powerful cards you have in your deck!"

Quote 2: "Every deck has a chance to win, as long as you believe in the heart of the cards. Let's duel!"

Quote 3: "I hope you've come prepared because it's time to duel!!"

Theses are the quotes your opponent use during the game.

When Yugi uses a monster's effect or summoning/fusing monsters

Quote 1: "I've finally broken all the magical seals... I call forth ... the unstoppable Exodia!"

Quote 6: "I fuse two of my monsters together. Fusion!"

Quote 8: "I offer a monster on my field as a tribute!"

Quote 9: "I offer two of my monsters as a tribute!"

Quote 2: "I'll use this card to bring a monster back on to the field...Monster Reborn!" (Yugi activates Monster Reborn)

Quote 3: "Change of Heart/Card Destruction/Raigeki!" (When Yugi attempts to turn the duel around to break the player's strategy)

Quote 6: "I see what you're trying to do, unfortunately it's not going to work. I activate Spellbinding Circle!"

Quote 7: "I see what you're trying to do, unfortunately it's not going to work. Trap Hole!"

Quote 10: "Now! I activate Mirror Force!" (When you attack his lifepoint directly or attack his Monster(s) with your Monster(s) )

Quote 2:"That was a good attack." (When taking less than 2,000 lifepoint damage)

Quote 3: "Argh! There must be something I can do, but what?" (When taking more than 2,000 lifepoint damage or taking damage when Yugi's got less than 3,000 lifepoint)

Quote 3: "What?" (When you use a card (usually a trap card) to cancel or he destroys the card he activates or when he destroys your flip effect Monster as soon it was flip/fusion/special summon)

Quote 2: "Yes! This was the card I was waiting for!

Quote 4: "I switch it to attack position."

Quote 5: "I switch it to defense position."

Quote 2: "I'm proud of you! Your skills have greatly improved! I can see that you'll make an excellent duelist!"

Quote 1: "You still need a lot of work to hone your dueling skills. You should start over and reconstruct your deck."

Quote 2: "You may be disappointed but realize that all desks have a chance to win. As long as you never give up, your opportunity for victory will arrive!"

Quote 3: "That was an excellent duel!! I'm lucky was able to draw the right cards at the right time."

You can use them in the following manner: