It has an English-language remake, Yu-Gi-Oh! The Eternal Duelist Soul, which makes a number of modifications, including incorporating some elements from Duel Monsters 6.

Changes from Duel Monsters 1 to 4[edit]

Yu-Gi-Oh! Duel Monsters 5: Expert 1 contains 928 cards, which come from sets in the Yu-Gi-Oh! Official Card Game, up until Curse of Anubis and this game's promotional cards.

This is composed of: 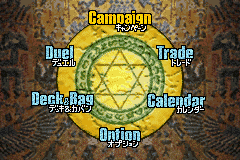 The following options are available from the main menu.

Opponents are arranged in "tiers", with higher tiers unlocked by beating already open tiers. A tier may consist of 4 or 5 duelists. In order to advance, all duelists on a tier must be beaten a certain amount of times before the next level can be unlocked. Beating a tier also unlocks certain in-game events, such as special cards that can only be received by beating that tier.

Certain events take place in Campaign Mode. Some are scheduled in the calendar, while others happen randomly. 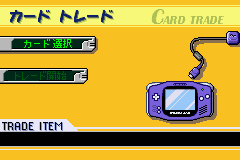 Players can connect two copies of the game, using the Game Link Cable to transfer cards between copies. The game is not compatible with the Wireless Link accessory for the Game Boy Advance.

After connecting two copies of the game and entering the trade menu, each player selects a card from their bag and confirms that they wish to trade it. Each card is then sent to the opposite player's game.

It is also possible to trade with the sequel, Yu-Gi-Oh! Duel Monsters 6: Expert 2. 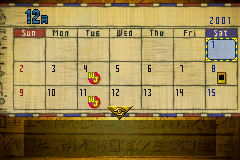 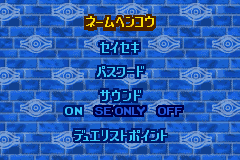 The option screen gives the player the following 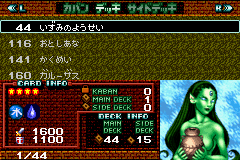 Each screen shows a list of cards with four visible at a time. The up and down arrows can be used to move through the cards one at a time or the left and right arrows to move four a time. When highlighted, a card's illustration, stats and the number of copies of it in the Bag, Deck and Side Deck are displayed. When selected, the player can view its details or move a copy to the Bag, Deck or Side Deck.

The order of the cards can be changed in each screen. The options to sort by are name (which is also numeric order), ATK, DEF, Level and Type. In the event of a tie, e.g. two cards having the same Level, when order by Level, they are ordered per the previously applied filter.

When starting a new game, the player is presented with a choice of three Decks, Black, Green, and Red, to use as their Initial Deck. Each Deck is generated by selecting a certain number of cards at random from a group of card pools.

In the below table, each card pool is represented in a column. The "Size" row is the total number of cards in the pool; the "Red", "Green", and "Black" rows show the number of cards the respective Deck selects from that pool.

Players open packs throughout the game. Each pack contains five cards; four Common cards and one, which can be of any other rarity.

The probabilities for the possible rarities of the fifth card are listed below.

The rarity names are not used in-game. However they correspond to the rarities the cards have in the Yu-Gi-Oh! Official Card Game. e.g. all cards in DM5's Vol.1 with 6/180 probability are Ultra Rare in the OCG's Vol.1. There is no visual indicator in the game to say exactly what rarity a card is. All Secret, Ultra, Super and Rare cards have their name displayed in a foil pattern when viewing the contents of a pack. 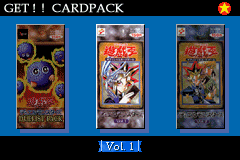 When the player wins a Duel, they are usually presented with a choice of Booster Packs, many of which are based on real-world OCG sets. Three packs are available at the beginning of the game. More are unlocked as the player meets certain conditions.

Normally a pack is awarded to the player for winning a Match in a tournament. The National Championship also awards Ticket Cards; The player can win "Set Sail for the Kingdom", "The Monarchy" and "Glory of the King's Hand" in the first, second and third rounds respectively.

Passwords can be found on the lower left hand corner of actual physical Yu-Gi-Oh! cards. In this and many other games, a password screen allows these codes to be entered to unlock new cards. However, there are two conditions to this:

It is possible to exploit this option to duplicate cards. When trading, after one player has pushed the trade button, if the second player waits until the card appears back on the first player's screen before pushing the trade button, both players will have both cards being traded.

By Dueling Simon once, the player gets a copy of every card not already in their possession.

The game almost directly follows the rules of the Yu-Gi-Oh! Official Card Game (OCG), as they were at the time of the game's development. Differences include:

D-Tactics is a feature that helps players learn the basics of the game and test them with puzzles.

There are some rules in D-Tactics.

Initially, only six levels are available. Each time the player completes six, the next six will become available, until all have been unlocked.