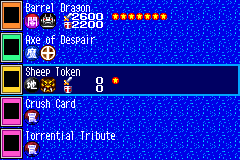 A "Sheep Token", appearing in a Purple Millennium Puzzle pack, due to a glitch card

A glitch card refers to a phenomenon in Yu-Gi-Oh! Worldwide Edition: Stairway to the Destined Duel. It occurs when the game attempts to load data for a card after supplying an ID number for a card that does not exist in the game, usually referring to a card from Yu-Gi-Oh! Duel Monsters 6: Expert 2, which was removed in Stairway to the Destined Duel.

Glitch cards can be obtained in certain packs. When this happens, they are replaced with a randomly-selected other card from the game. This can include Tokens. This glitch allows players to see the "Sheep Token", which is not normally accessible in the game. The following glitch cards can be found in the listed packs: