Yu-Gi-Oh! Duel Monsters 6: Expert 2 is a video game for the Game Boy Advance, released in Japan on December 20, 2001. A modified version was later released internationally under the title Yu-Gi-Oh! Worldwide Edition: Stairway to the Destined Duel.

Duel Monsters 6: Expert 2 is set during the Battle City arc. The player Duels characters from the anime and manga. The player can participate in a few tournaments and Duel single opponents they come across on the map screen. Cards are awarded for various reasons including defeating opponents, winning tournaments and free cards with the Duelist Weekly magazine. 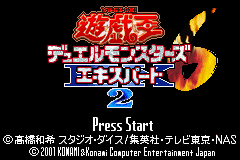 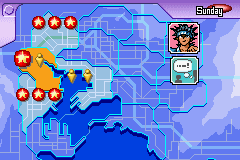 Non-opponent characters, include Roland, who announces events, and the unnamed unseen "Passengers" that the player can speak to. 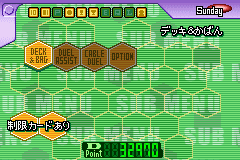 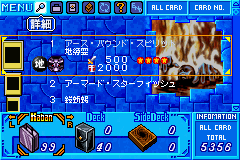 Each screen shows a list of cards with four visible at a time. The up and down arrows can be used to move through the cards one at a time or the left and right arrows to move four a time. When highlighted, a card's illustration, kana name, stats and the number of copies of it in the Bag, Deck and Side Deck are displayed. When selected, the player can view its details or move a copy to the Bag, Deck or Side Deck.

"Trade" allows players to connect the to Yu-Gi-Oh! Duel Monsters 5: Expert 1 or a second copy of Yu-Gi-Oh! Duel Monsters 6: Expert 2 , using the Game Link Cable to transfer cards between copies. After connecting two copies of the game and entering the trade menu, each player selects a card from their bag and confirms that they wish to trade it. Each card is then sent to the opposite player's game. Cards that do not exist in Duel Monsters 5 cannot be traded to it.

"8 Pass" allows players to enter the 8-digit Passwords from Yu-Gi-Oh! Official Card Game cards to acquire copies of the card in the game. It costs 500 Duel Points to enter the Password menu, regardless of whether the entered Password valid or not or if the player even attempts to enter a password.

The sub menu with all the achievement icons highlighted 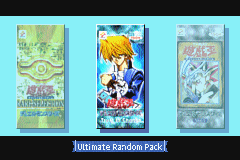 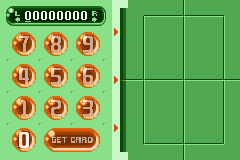 In the password menu, the player can get cards by entering the eight digit Password found in the bottom corner of real cards.